How Leaky Is Your Bucket?

I visited my parents over the weekend and got talking to my father about personal finance, the low savings rate in America, and the broad economic implications thereof.

Dad asked me, “Do you remember when you were a teenager and I told you about the leaky bucket?”

“Leaky bucket?” I asked as I cut him a sideways look. “No, I don't remember anything about a leaky bucket.”

“Well,” he replied, “I told you long ago that personal finance is like putting water into a leaky bucket.”

He continued, “The water going into the bucket is your income, and the water leaking out is your spending. If you put water into the bucket faster than it leaks out, sooner or later it will be full. If not, your bucket will eventually drip empty.”

Now, I'm unsure of exactly where he got this leaky bucket analogy. I didn't ask and really don't think it's a wholly original idea. But I do have a good idea where it's from.

A quick internet search finds the analogy has been used in several different fields, from marketing to telecommunications.

Statistician and marketing theorist Andrew Ehrenberg is said to have coined the phrase “leaky bucket” to describe customer turnover. In Ehrenberg's concept model, businesses are always losing (or leaking) customers. So to maintain equilibrium, companies need to gain just as many customers as they lose. To gain market share, companies must either gain new customers faster than they lose them or figure out a way to plug the leaks.

In telecommunications, the concept is used in algorithms to control the flow of traffic. It's a throttling measure to help prevent an overflow of information traffic. 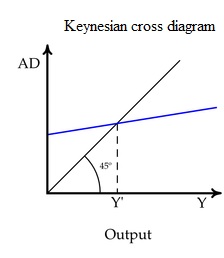 The leaky bucket analogy has also been used to help explain macroeconomic concepts such as the expenditure-output model, otherwise known as the Keynesian Cross. Keynes' cross diagram is a central idea in his General Theory, which plots aggregate income and aggregate spending.

But it's unlikely dad got his leaky bucket analogy from Ehrenberg or Keynes. Instead, it's more likely he adapted this idea from Benjamin Franklin, a man my father greatly admires.

Regardless of where my father picked up or adapted his leaky bucket idea, it is beautifully simple. Certainly spending more than you make will eventually leave you bankrupt. And plugging your own spending leaks will increase your overall net worth.

So I pose a question to you, dear reader: How leaky is your bucket?

What areas could you plug?

You might begin by thinking of some of your biggest expenses — taxes, housing, transportation, food, clothing, etc. And those are great places to start, but I also want you to consider the “little expenses” Franklin wrote about, especially those that don't see a monetary return.

(FYI: In 2018, Americans spent over $72 billion on their pets. That's close to what they spend buying cigarettes every year.)

Nevertheless, I can't tell you where to plug your own leaks, as I don't know your personal finances. Only you know how you spend your money. But consider dad's leaky bucket, even if it's not a wholly original idea.

Benjamin Franklin himself rephrased certain wisdoms. Franklin also wrote, “A penny saved is a penny earned.” The original version of that proverb dates back to as early as 1633 (more than 70 years before Franklin was born) to George Herbert's Outlandish Proverbs in which he wrote, “A penny spar'd is twice got.” So dad is not in the worst company.

How leaky is your bucket? Where can you plug the leaks?