Two years ago, my mother died of Alzheimer's disease. It was a long and terrible process that was interrupted by a brief glimmer of hope.

At one point the doctors gave her a medication called Memantine, which slowed the progress of the affliction for about a year.

Here is what the Mayo Clinic writes about the drug:

Memantine (Namenda) is approved by the FDA for treatment of moderate to severe Alzheimer's disease. It works by regulating the activity of glutamate, a messenger chemical widely involved in brain functions — including learning and memory. It's taken as a pill or syrup. Common side effects include dizziness, headache, confusion and agitation.

There is no cure for Alzheimer's, but drugs like Memantine can stop the decrease in function for a time, after which the destruction of brain cells becomes too much.

I’m not a doctor, but these symptoms — including the agitation and outburst — acted out by President Biden are familiar. If that is the case and we assume he started taking these drugs before the elections, it means time is running out and the drugs may have already stopped working. 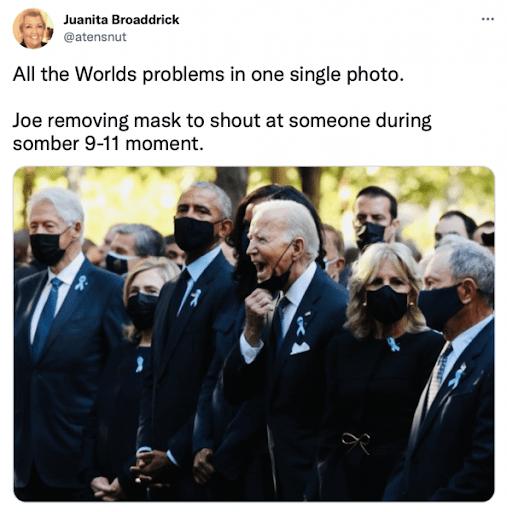 Obama’s look says it all.

If you think the recent debacles in Afghanistan and the continuing reaction to COVID-19 make very little sense, you are not alone.

The only real explanation for how the United States is now governed is that it is being run by an anonymous, unaccountable committee with the president meandering along, propped up and exposed.

And it will only get worse.

Every proposal out of Washington these days is a sophomoric socialist wish list that claims to stick it to the rich and give to the poor. However, in effect, they will merely serve to exacerbate the dumbbell of economic inequality by destroying the middle class, protecting the wealthy, and condemning the poor to a crime-infested stew of shrinking purchasing power and rolling blackouts.

In its latest proposal, the Biden administration is taking aim at cryptocurrencies, most notably Bitcoin. All governments want money and power, and Bitcoin is a threat to both.

You can’t tax Bitcoin unless it goes through a third party. This is why the government is proposing that any crypto transaction over $10,000 be reported to the IRS. Some want the number to be as little as $250.

You can find these Orwellian plans outlined here.

I first got into Bitcoin back in 2016, when it was trading around $459, because it offered a way to avoid the Federal Reserve systems, the government, and the banks.

These new plans would do away with that advantage for most Bitcoin users as the majority of owners buy through a broker that can be regulated like Coinbase.

Furthermore, the Biden administration is gunning for Bitcoin because it is not environmentally friendly. The mining process uses as much energy as all of Sweden.

This is why, when the crackdown gets underway, some percentage of crypto users will move from Bitcoin to more secure blockchains.

And much like prostitutes moved from Craigslist to Backpage to OnlyFans as a reaction to governmental coercion, so too will any illegal activity move from one blockchain to the next, always one step ahead of the jailer.

I’ve found a way you can profit from these macro trends. I’ve written a special report for Launchpad Trader readers that outlines six unique cryptocurrencies. Three of them trade for less than $1, but all of them have the potential for explosive growth.

I will tell you:

After you finish reading this exclusive report, you’ll be seconds away from investing in the absolute hottest coins in the entire crypto sector.