On Friday I wrote to you explaining the reasons I believe the rise of socialism in America is inevitable.

To summarize: Human development is not linear. Progress occurs as ideals swing from one extreme to another. And the pendulum of American ideals has begun swinging away from crony capitalism and toward a form of socialism.

Today I want to follow that up by talking with you about exactly the type of socialism we should expect (it's probably not as bad as you think) and how to actually profit from it.

So here's the short of it: When people say “socialism,” they're generally not referring to a dictionary definition.

Socialism is an umbrella term for a broad system of approaches to managing government ownership of a nation's trade and resources that often involve cooperatives, worker-owned businesses, and/or communes.

But that's not exactly what most people mean when they say “socialism” — or at least that's not the main focus.

In 2018, Gallup asked Americans to define “socialism.” Then it compared those results to the same question posed to the public 70 years ago. Here's what it reported:

When asked to explain their understanding of the term "socialism," 17% of Americans define it as government ownership of the means of production, half the number who defined it this way in 1949 when Gallup first asked about Americans' views of the term.

Gallup found that Americans today are most likely to define socialism as “equality for everyone.” Gallup said, “Others understand the term as meaning the provision of benefits and social services, a modified form of communism, or a conception of socialism as people being social and getting along with one another.”

Does that make most Americans wrong about socialism?

But it's within this misunderstanding that we can see the path of national ideals and the doors to opportunities laid along the way.

All put together, here's what I see...

The type of “socialism” on the rise in America is an ideology that will mainly seek to devote more public resources to socially conscious policies and regulations to promote equality — as defined by the culture of the current Democratic Party. It's an overcompensated opposing reaction to the crony capitalism of Gordon Gekko or The Wolf of Wall Street.

So when I say “socialism is on the rise,” it's not the type of socialism where you're going to find yourself shoeless and standing in the streets throwing flowers to tyrants as they wave, riding by in their Rolls-Royces.

Realistically, what we're looking at is more public resources being directed to socially conscious policies that promote forms of equality — again, as defined by the current culture of the left.

Yes... no... sort of... maybe... It doesn't really matter. That's the direction we're headed. And from there we can begin to look for investment opportunities.

I see two branching investment approaches from this shift, and both will be profitable:

Let's look back Barack Obama's presidency for a moment.

Obamacare: Obama's Affordable Care Act may not have panned out the way most people had hoped. But at its core, the ACA was a socialist policy by anyone's definition.

It was also one of the best things to ever happen to health care companies.

Today, health care stocks fall whenever Obama's ACA is threatened. Point is, aligning investments to profit from whatever “socialist” policies will be put into place will very rewarding.

One of the biggest issues on the left is still health care. Bernie Sanders’ Medicare for All plan calls for an end to the current Medicare system and to replace it with a new universal one.

That probably won't happen. Completely overhauling the health care system has been mostly dismissed by the health care industry and politicians on both sides. What's more likely under a “socialist” president is another expansion of the current Medicare system. And that could be very profitable again for health care stocks.

Another agenda on the platform is free college. That will mostly likely mean more public money going to students to pay for college, and thus more students overall.

More students means more student needs. There are other costs associated with college life. According to CollegeBoard.org, tuition and fees only represent 20% to 40% of the total budget for students.

The College Board estimates the average U.S. student still spends around $1,200 a year on physical textbooks and supplies. In fact, some students end up spending more on textbooks than tuition.

More money for college will very likely mean higher textbook sales. That could be beneficial to publishers like Houghton Mifflin Harcourt (NASDAQ: HMHC).

Again, aligning investments to profit from whatever “socialist” policies will be put into place — whether that's expanding health care, free college, or whatever — will very rewarding.

But if there's one thing you can bet on, it's this: A self-declared socialist president of any sorts will drive the far-right conservatives absolutely nuts.

They're going to have a meltdown. Simultaneously, it will likely be the best thing to ever happen to conservative outlets like Fox News and Drudge Report.

It has happened before. When Barack Obama was elected, there were outlandish fears being pushed from conservative outlets. You remember.

Among those fears was the narrative, “Obama's going to take your guns away.”

Ted Cruz even called him “the most anti-gun president” in history.

Of course, Obama didn't take anyone's guns. Only two gun laws made it through Congress during Obama's two terms in office. And neither put any additional restrictions on gun owners. In fact, the two gun laws signed by Obama actually expanded the rights of gun owners.

Nevertheless, the narrative continued. And as a result, gun stocks skyrocketed.

Gun manufacturers like Sturm, Ruger & Company (NYSE: RGR) had their best years during Obama's presidency. RGR stock rose by more than 700% under Obama.

This headline from a recent opinion article from MarketWatch says it all: 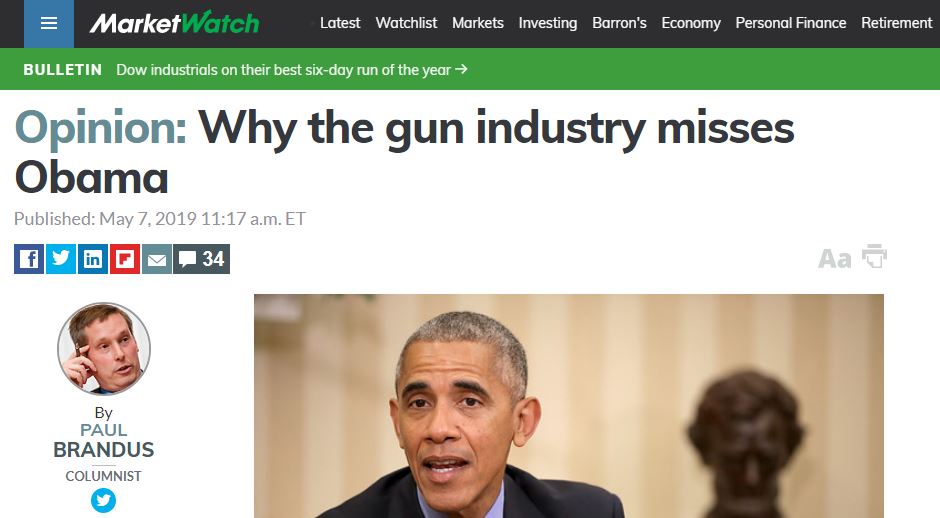 The point here is this: With a self-described "socialist" sitting in the Executive Office, you'll probably want to be invested in gun stocks.

It's very likely gun rights will be touted as a concern under a socialist president. And gun stocks could again become a good medium for big profits.

At the end of the day, I want you to remember that there are going to be investment opportunities in any kind of market. It's important to be pragmatic about politics. Most of it is just entertainment anyway. As investors seeking the highest ROI, we should, at most times, simply react to the changing tides rather than struggle against them.

Don't get mad. Get rich.