The yellow metal is digesting several different pieces of news this morning, including reports that Japan is poised to declare a “state of emergency” for the second time in the COVID-19 pandemic and a sharply lower U.S. dollar.

Japanese Prime Minister Yoshihide Suga told reporters, “We, as the government, are entering into consideration to declare a state of emergency. We will work out the details as soon as possible to effectively reduce infection risks while eating and drinking,” adding that medical experts have emphasized the need to curb cases originating from restaurants and bars.

For the past 20 years, January and February have generally been the best months for gold prices.

So I'm not really surprised to see gold opening the year strong.

For the past two months, I've been urging subscribers of my Junior Mining Trader newsletter to buy gold stocks ahead of this rally. See, there's a good reason gold prices increase this time of year.

Gold prices tend to rally in January and February in preparation for holiday jewelry buying — specifically Valentine's Day in the U.S. and Chinese New Year (a floating holiday that falls between January 21 and February 21).

Valentine's Day is essentially Christmas for jewelers in the U.S. They'd have you believe it's “a magical time” to buy jewelry. And that's true — if by “magical” they mean “the most expensive.”

$5.8 billion of that was spent on jewelry.

Nearly $6 billion in jewelry sales for one day.

And Chinese New Year is just as big.

Retail trade revenue of gold, silver, and jewelry in China during January and February 2020 totaled 27.72 billion yuan (almost US$4.3 billion).

So around the world, holiday buying in February is a $10 billion-plus opportunity for jewelers.

And again, that's a $10 billion-plus opportunity for one day.

As you can imagine, jewelers want to be prepared for the spike in sales. To do that, they need more inventory. And that means producing more jewelry themselves or ordering more from a manufacturer.

Either way will result in an increased overall demand for the raw materials (gold and precious metals) to produce the jewelry. And that increased demand results in rising prices.

In short, we have seen a consistent January-February gold rally over the past two decades as jewelry manufacturing picks up ahead of the holiday buying season.

How will the 2021 holiday jewelry buying season fare?

However, people are much more comfortable going out now than they were when the COVID pandemic began. And, despite the constant news of people struggling financially, many are still spending money.

According to the Brookings Institute, Americans will have spent around $12.5 trillion on durable and nondurable goods and services in 2020. That's only $0.5 trillion less than they spent in 2019.

The mainstream media keep showing us pictures of people standing in line for food. But here's what they aren't showing you: 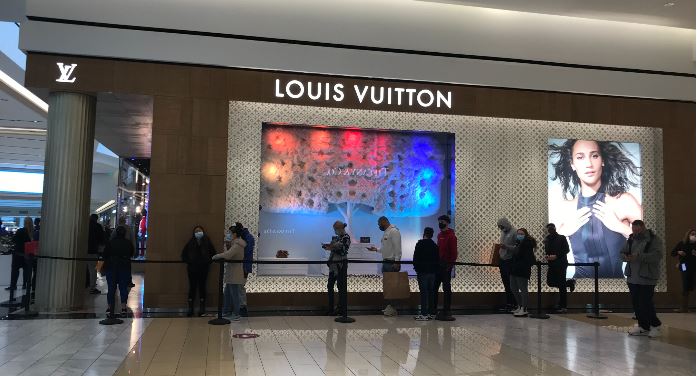 Yeah, you see it: People are lined up to spend their money at this Louis Vuitton!

The line wraps around the front of the store!

I snapped this photo over the weekend at the King of Prussia mall, which is just north of Philadelphia.

My first thought was maybe these people were here to spend Christmas money — or worse, stimulus money they just got from the government.

One of the people I was with mentioned he'd been to this mall three times since August and on every visit, this line was here.

So there isn't just a line at the store now. There has been a line at this Louis Vuitton store for months.

People are still spending their money. The COVID pandemic didn't make the public's buying habits any better. So I don't think we'll have an exceptionally weak jewelry-buying season like last year.

(By the way, there was also a Tiffany across from that Louis Vuitton — I didn't get a photo of it, but people were beginning to line up there as we left.)

I think we'll see gold pop back over $2,000 an ounce over the next few weeks. And from there, I expect momentum to send gold to the moon.