It is always a good idea to front-run the Fed.

In my newsletter, Bull and Bust Report, we've been pounding the table for gold and silver for a while now...

Gold was moving because Fed Chairman Powell told us he was going to destroy the U.S. dollar, and we believed him. 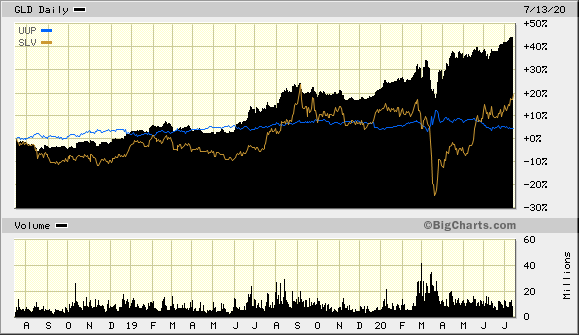 The black part is gold, silver is the gold line, and the blue line is the U.S. dollar ETF. As you can see, the dollar is slowly rolling over as gold and silver are heading higher.

And though it is true gold stocks have been running hard, gold and silver miners have been up more.

In the Bull and Bust Report, we are up triple digits in three gold stocks and up 78% in our gold and metals portfolio –– we continue to buy.

We are long things that have intrinsic value, things you can drop on your foot as they say: gold, land, and lumber...

And it all stems from central banks playing fast and loose with the value of your assets.

A few years ago, the last time the price of gold took off, there was a debate regarding the idea that gold was money. I'd like to revisit it to show that things have changed, and they're worse.

This stemmed from when Ron Paul faced off against Ben Bernanke in Congress.

Paul badgered Bernanke into answering the question of whether gold is money, to which Benjamin flatly responded, “No.”

“When you wake up in the morning, do you think about the price of gold?” Rep. Paul asked.

After pausing for a second, Bernanke responded, clearly uncomfortable that he paid much attention to the price of gold, only to be interrupted once again.

“Gold’s at about $1,580 [an ounce] this morning, what do you think of the price of gold?” asked Rep. Paul. A stern-faced Bernanke responded people bought it for protection and was once again cut off, with Ron Paul once again on the offensive.

“Is gold money?” he asked. Clearly bothered, Bernanke told the representative, “No. It’s a precious metal.”

After Paul interrupted him to note the long history of gold being used as money, Bernanke continued, “It’s an asset. Would you say Treasury bills are money? I don’t think they’re money either, but they’re a financial asset.”

Paul asked Bernanke why central banks didn’t hold diamonds, clearly hinting at his fiat money criticism of the U.S. monetary system. The Fed Chairman told Rep. Paul it was nothing more than tradition...

That’s What They Want You to Think

Bureaucrats and politicians don’t want gold to be money because you can’t just print gold. They want to fund their projects without paying for them –– pull one rabbit out of the same hat time and time again.

For the past 25 years, we've lurched from one debt crisis to another: from Greenspan to Bernanke, from Yellen to Powell ––  Clinton, Bush, Obama, Trump –– it's money printing all the way down.

Since 1995, when Chairman Greenspan put a turbo on the printing press, M2  has gone from $3.5 trillion to $18 trillion. That’s a 414% increase in a little more than a generation.

And this number is conservative as the printing press never stops.

Of Course Gold Is Money

Gold possesses all the monetary properties that the market demands: it is divisible, portable, recognizable, and, most importantly, scarce — making it a stable store of value. It is all things the market needs good money to be and has been recognized as such throughout history. Gold rose to new record highs of nearly $1812.45 an ounce after the Fed’s most recent round of quantitative easing because the people know that gold is money when fiat money fails.

Central bankers recognize this too, even if they officially deny it. Some analysts have speculated that the International Monetary Fund’s real clout is due to its large holdings of gold. And central banks around the world have increased their gold holdings over the last year, especially in emerging market economies trying to protect themselves from the collapse of Western fiat currencies.

The defamation of gold wrought by central banks and governments is because gold exposes the devaluation of fiat currencies and the flawed policies of the government. Governments hate gold because people can't be fooled by it.

You can't print gold. You can't fool the great unwashed by saying it is what it isn't.

The price of gold is about to fly. It's been over 500% since 2000, and it’s still undervalued. Heck, the real run hasn’t even started.

That’s why I’m recommending three gold stocks that you want to own now. Click here for the free report.