It is useful to distinguish among four factors which give importance, urgency, and inevitability to the advancement of space technology. The first of these factors is the compelling urge of man to explore and to discover, the thrust of curiosity that leads men to try to go where no one has gone before.

There’s a good reason the quote above might sound a bit familiar to you: It’s the origin of the famous Star Trek phrase “to boldly go where no man has gone before.”

Yes, folks, I am a Trekkie.

I don’t go to Star Trek conventions or dress up or anything like that. But like all Trekkies, I recognize and appreciate Gene Roddenberry’s vision for cultural and social change with enriching allegories in the style of classical mythology.

Star Trek is like the Grateful Dead: You either totally get it or you totally don’t. But if you have any doubts on how truly important the show was yourself, I urge you to listen to actress Nichelle Nichols’ (Lieutenant Uhura) story about how and why Martin Luther King, Jr. dissuaded her from quitting Star Trek after the first season. I’ll put a link to that at the end of this article. 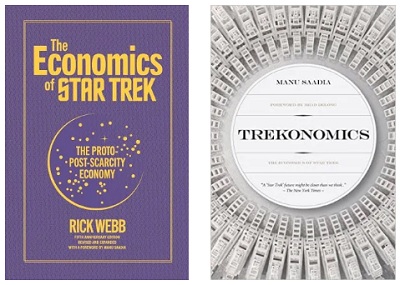 In the Star Trek universe there are some societies and cultures that use money, such as the Ferengi. But the Federation doesn’t issue or collect paychecks or use money, and it maintains a philosophy that isn’t concerned with material wealth in a system referred to as “New World Economy.” That's right, Captain Kirk doesn't get paid.

We see this philosophy in the following episodes and films:

Even though most of the Star Trek universe doesn’t use money, they still have use for a very important and familiar metal: gold. 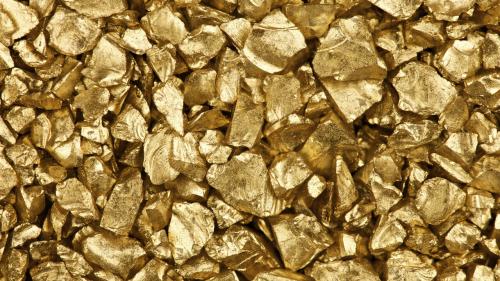 In S01E05 of The Next Generation, the USS Enterprise and a Ferengi ship are trapped by a planet that’s draining the power of their spaceships. An away team from both ships is sent to the planet's surface, where the Ferengi attack the crew of the Enterprise. One of the Ferengi says of the Federation, “They adorn themselves with gold, a despicable use of the valuable metal.”

But then in S06E12 of Deep Space 9 titled “Who Mourns for Morn,” another Ferengi learns that his gold-pressed latinum (a fictional element) is actually mostly gold, to which he exclaims, “There's nothing here but worthless gold!”

This seems to suggest that even though gold is no longer a monetary asset, it’s still a valuable resource.

And that makes a lot of sense.

You see, gold is extremely important to space travel — in fiction and in real-life.

Space is a very dangerous place for humans. And it’s just not the lack of oxygen and air pressure that can kill you in space.

The scariest thing about space, in my opinion at least, is the radiation.

Don’t think about this too hard. Because the reality of it is truly frightening. But the fact is, the Earth is hopelessly and desperately surrounded by a sea of intense, deadly radiation that's expanding in all directions infinitely at light speed. Imagine a grain of sand in the ocean — except the ocean is infinitely deep and wide.

Celestial bodies such as the Sun, however, produce massive amounts of radiation. Fortunately, the Earth’s magnetic core blocks most of the Sun’s ultraviolet radiation. NASA says:

Enveloping our planet and protecting us from the fury of the Sun is a giant bubble of magnetism called the magnetosphere. It deflects most of the solar material sweeping towards us from our star at 1 million miles per hour or more. Without the magnetosphere, the relentless action of these solar particles could strip the Earth of its protective layers, which shield us from the Sun’s ultraviolet radiation. It’s clear that this magnetic bubble was key to helping Earth develop into a habitable planet.

Bottom line here is this: Space radiation is baaaaad news for space travelers. Fortunately, however, we can protect ourselves and the delicate electronics on a spacecraft with a very special metal: gold.

See, direct exposure from radiation in space transfers heat. It's like something being cooked in a microwave. As a result, keeping the electrical systems cool is less about insulation and more about reflection. And gold is very important in this regard.

Gold is very good for reflecting radiation. It reflects as much radiation as other great radiation reflectors. But it’s better. Gold also absorbs a lot of visible light. That means it won’t blind astronauts with very bright reflections.

But here's the best part: Gold doesn’t oxidize. In other words, it doesn’t rust.

Copper, silver, and aluminum — other radiation reflectors — will oxidize over time. That means parts made with these metals need to be replaced eventually. But when you’re traveling, you can’t just stop by the local parts supplier to get new spacecraft components.

You have to either bring a bunch of replacement parts with you — which are heavy and costly to launch off Earth — or use a material like gold that won’t rust.

The future of both manned and unmanned space exploration will require gold — not as a monetary asset, but instead as an element of vital protection for both humans and the electronics that operate their spacecrafts. The future needs gold.

Gold may be a relic of our monetary systems. But it's the metal that will allow man to explore "space, the final frontier."

P.S. Here are a few links telling the story of Nichelle Nichols and her role on Star Trek. She has told her MLK Jr. story a million times, and there are several videos online of Ms. Nichols’ account.

Here is a very short version of her telling the story: https://www.youtube.com/watch?v=pqoZ0C0cnRE

Here is a longer version: https://www.youtube.com/watch?v=pSq_UIuxba8

And here is a comedic version from Comedy Central’s Drunk History: https://www.youtube.com/watch?v=o-uJOzkrJV4