Get Ready for Gold's Hyper-Bull Market

Gold is set to experience one of the greatest and most powerful bull markets in history.

Forget the run-up in gold prices back in 2011. We called that a “bull market” back then. But what's coming will make the 2011 gold rally look minor in comparison.

I'm not even sure calling gold's next move a “bull market” will suffice in describing price increases. What's coming next might be better described as a “hyper-bull market.”

We're talking about an event for gold that will be studied by future economists, argued by future academics, and honored by future gold bugs.

It will disrupt monetary and fiscal policy. And it will make fundamental changes to global economies.

It will change perceptions of fiat money. And it will force currency revaluations.

It will completely bankrupt some. And it will make others insanely rich.

But you'll only have one chance to take part in this bull market –– one very brief chance, with the window of opportunity quickly closing as we speak. And, believe me, this is not an opportunity you're going to want to miss.

To get there, we're going to have to slog through a bit of economic jargon. But I promise you, this is very easy stuff to wrap your head around.

It all starts with a simple supply and demand concept in what economists call the quantity theory of money (QTM).

The quantity theory of money states that the value of money (and price levels for goods and services) is directly proportional to the amount of money in circulation –– aka money supply.

Printing more money leads to what you know as inflation. Inflation is most often thought of as a rise in the price of goods and services. But we can also think of inflation as a decline in the purchasing power of a currency.

In response to the COVID-19 pandemic, the U.S. Federal Reserve intervened to help curb economic damage. That support included emergency rate cuts down to 0% to 0.25% and the largest expansion to U.S. money supply in history in a process known as monetizing debt –– aka quantitative easing.

In short, monetizing debt is when a government raises money by creating new debt products, which are immediately purchased by their central bank in exchange for newly printed cash.

It's a pretty sweet deal for the government. It means there's nothing it can't pay for. But, of course, there is no free lunch.

Over the past few months, the U.S. Federal Reserve has been printing money and buying up government debt (hence monetizing debt) like never before.

In the nine weeks between March 9 and May 11, the Fed added $2.3 trillion dollars to the money supply as measured by M2. 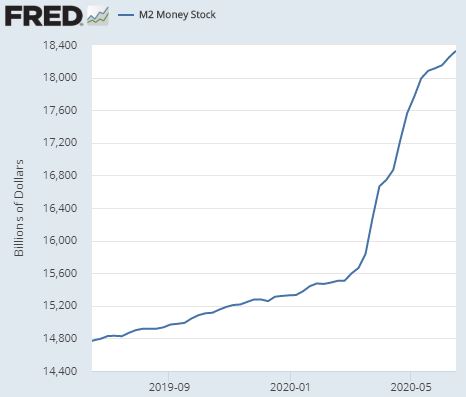 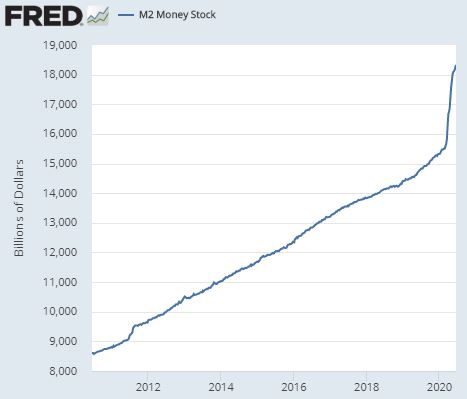 With such a drastic increase to the U.S. money supply, the quantity theory of money would expect a significant decline in the value of the U.S. dollar and subsequent rise in alternatives, such as gold and other world currencies. But that's not exactly how it's shaking out, yet.

The value of the USD was sitting at a two-year high throughout most of the first wave of shutdowns.

Meanwhile, the price of gold has only increased by about 10% since the beginning of the pandemic.

But there's a good reason for this.

While the relationship between money supply, demand, and value is accurate as presented by the quantity theory of money, there are a number of other variables in the real world that mediate the effects of changes. The most important of those variables is another simple concept known as the velocity of money.

The velocity of money is extremely important to its value. That's because, in a way, the only money the market values is money being used right now. All other money only has potential value. That's because the money just sitting in a bank is effectively out of circulation –– it's out of the game. Even though it's still part of the total supply, money not being used is... well, not being used. And if it's out of regular circulation, it's (temporarily at least) out of the value equation. 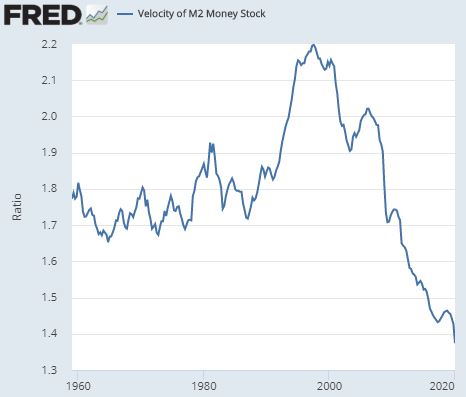 Now, here's the most important part...

The slowdown in money being exchanged has, to date, mitigated the effects of the Federal Reserve's eye-popping expansion to America's money supply.

If the velocity of money remained steady throughout the COVID-19 pandemic, we would have already seen major declines in the value of the U.S. dollar. And we would probably already be looking at $2,000 gold.

Nevertheless, once the velocity of money does ramp back up (and it will), that $2.3 trillion in new cash the Fed just pumped into the supply is going to collapse the value of the USD.

There is no free lunch.

And this collapse is going to lift gold prices to historic levels. We've never seen such an expansion in USD supply, nor do we know how badly its value will be affected. But with such a massive threat to the value of the USD, we don't think $5,000 gold is completely out of the question.

Here's what all this means for you...

The bad news is the value of your money is rapidly approaching a decline unlike any other. Due to declines in consumer and business spending, prices for goods and services have actually decreased –– aka deflation –– over the past few months. However, when that $2.3 trillion the Fed just pumped into the money supply starts taking effect, the purchasing power of your money will fall.

The urgent news, however, is you better act soon if you want to participate. As I write to you today, many states around the nation are slowing or reversing their reopening phases due to reports of increased COVID-19 cases. That gives you a bit more time to buy gold at a reasonable price as consumer and business spending will continue to be tempered and mitigated by the effects of the Fed's money printing but not much more.

The price of gold has slowly been on the rise over the past several weeks. On Tuesday, gold breached $1,800 an ounce for the first time since 2011. Lofty prices will soon attract inexperienced speculators, which we expect to drive up prices even further. So the sooner you act, the better.

Long-time Energy and Capital readers know we've been preparing for an event like this for years. In fact, Chris DeHaemer and I have nearly dedicated our entire careers to rare events like these. That's because you only need to participate in one to become extraordinarily wealthy.

Combined, DeHaemer and I have been studying the gold market for over 40 years. And that's only between the two of us. We have a staff of in-house researchers at Angel Publishing that have dedicated large chunks of their careers to the gold and natural resource markets. Based on our decades of experience, DeHaemer and I just finished putting together a report, in which we single out three specific gold stocks we believe will be the absolute most profitable for investors over the next few months.

To learn more about exactly how and why gold is set to experience this rare hyper-bull market and how to get your hands on that report, click here.

We're looking to make a lot of money over the next several months. I urge you to learn more about what's going on with the Federal Reserve, money supply, and how it's inevitably going to affect gold prices in the near future.

If you've been a gold investor in the past, now is the time to participate again if you haven't already.

And if you've never invested in gold in your life, this might be the only time you'll ever need to. Please, learn more here.