Get ready for a big price hike at the pump this summer. One that could shatter records... and your checking account.

The price of oil is on the rise, nearing a three-year high. And if OPEC gets its way, the price of crude will reach $100 per barrel soon.

Oil prices are now over $68 a barrel — that's up 30% in the past six months alone. And after breezing over the $66 level earlier this month, they look to be headed higher. Here's a two-year chart: 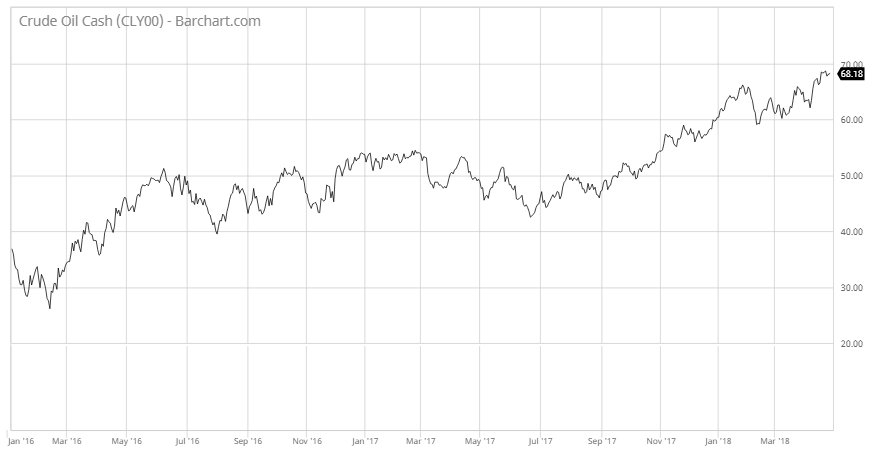 You might already be feeling the recent rise in oil prices at the pump.

This is the highest gas prices have been since summer 2015. AAA says gas prices have already exceeded the typical summer demand prices. And the price at the pump still looks to be on the rise, with crude headed higher.

The price of oil has been moving higher over the past few weeks on declining inventories and a falling U.S. dollar.

Last week, crude inventories fell by 1.1 million barrels due to a sharp decline in imports. OPEC, Russia, and several other producers collaborated to reduce crude supply in January 2017 in order to ease a glut and support prices.

The group has now extended that agreement until December 2018. This is likely to lead to more declines in inventories and could push oil prices much higher.

Meanwhile, the U.S. dollar struggles to recover after sitting near four-year lows since the beginning of 2018. America is the world's largest consumer and importer of crude. As such, the U.S. dollar has a loose inverse correlation with oil prices over the longer term.

So, generally speaking, when the dollar goes down, oil goes up. Here's a five-year chart of the U.S. Dollar Index: 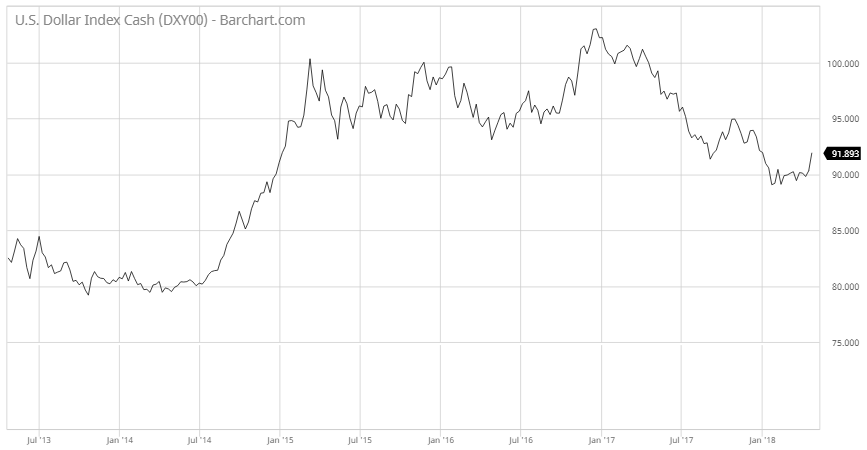 Analysts expect oil prices to continue heading higher past $70 per barrel. But OPEC could be shooting for $100.

In an interview with Reuters, two industry sources said OPEC has talked about a desire for $80 or $100 oil in closed-door briefings in the past few weeks. They reported a separate high-level industry source said, “I would not be surprised if Saudi Arabia wanted oil at $100 until this IPO is out of the way.”

The IPO the source is talking about is Saudi Aramco. The country is preparing to take its state-owned Saudi Aramco public. The sale of 5% of Aramco is expected to value the company from $1 to $2 trillion, making it the largest IPO in history.

Saudi Aramco's first listing will be on the kingdom's own stock exchange, the Tadawul, in Riyadh. It's still unknown whether Aramco's stock will be listed anywhere else.

But if Saudi Arabia and OPEC get their $100 oil, gasoline prices could easily break record highs this summer.

As I already mentioned, the national average for gasoline right now is $2.76. Oil is still under $70 per barrel. And we aren't really into the summer demand season yet. You could easily be paying $3.50 per gallon for gas this summer.

It always sucks to make predictions for higher gasoline prices; you don't want to be right. But with OPEC and other major oil-producing nations pushing for higher crude prices and cutting supply while the U.S. dollar is in terminal decline, it seems gasoline prices could be cutting more into our summer budgets than we might be expecting now.