From Bad to Worse

Stocks are ripping. They shot up 1,050 points yesterday and are hot out of the gate this morning. They are going up because the coronavirus news is better than what the media's been telling us. Turns out 100,000 people aren't going to die this week.

That’s great, but in terms of the stock market and the economy, the number of deaths is meaningless. The only thing that matters is perceived earnings growth. Sure, the new hope will push stocks up for a day or two.

I’ll tell you why.

This recession will be worse than 2008.

Goldman Sachs put out a note recently saying that we won’t hit new highs for earnings per share until 2021 or 2022. The best-case scenario is 18 months.

Here is the employment chart put out by the St. Louis Fed. 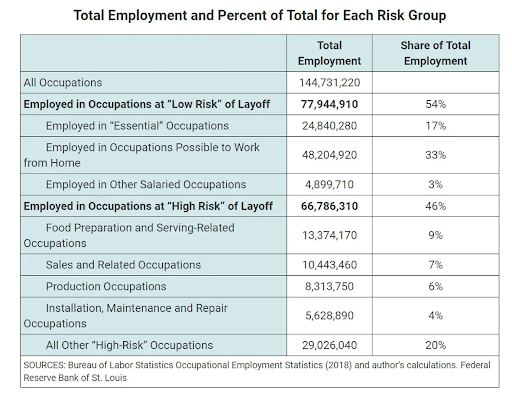 You will notice that 46% of those have a “high risk” of layoff!

And that’s not counting people who work at home for “high risk” industries. The oil patch is going to get destroyed.

It is worse than the Great Recession because it is happening faster. Over the last two weeks, more than 10 million people entered the unemployment rolls. In 2008, it took 18 months to hit that 15 million. We could do it this week.

Projections on second-quarter GDP range anywhere from -14% to -34%. These are record numbers.

People won’t just get their jobs back. Kudlow, Trump’s economic spokesperson, just said that he expects this to go on for another four to eight weeks.

Take the over on that.

The thing is, 50% of small businesses have just enough cash to be closed for two months — and the first month has passed.

Remember that game pick-up sticks? You dump out a pile of long thin sticks and take turns removing them without moving another one? Eventually the whole pile falls down.

That’s the modern economy. Everything is connected. Every tennant who is screaming about a rent holiday is scaring the crap out of the landlord, who can’t afford two mortgages without rent coming in. This, in turn, frightens the banks and the bondholders and local government.

Fifteen percent of housing mortgages could be in arrears by the end of the summer. And, again, what do the mortgage companies do when the cash flow stops?

The Mortgage Bankers Association estimates that if one-quarter of borrowers avail themselves of forbearance for six months or longer, servicers could be on the hook for payments of at least $75 billion and as much as $100 billion or more.

As each stick gets pulled out, another one moves. People don’t put on that new sunroom or buy the summer house. The realtor doesn't lease the Audi. The contractor lays off some of his second crew. Home Depot closes some stores, the lumber mill reduces hours, and on and on.

The economy, EPS, growth, unemployment, housing, social unrest, you name it — it will get worse from here. Now is the time to be fearful while the greedy are pumping this market.

Sell some equities. Buy some gold.