Since the oil crisis of 1973, the idea of peak oil has fluttered in and out of the consciousness of consumers and investors all over the world.

About that time, the U.S. had supposedly peaked its oil production, and every president and politician who was forced to discuss it claimed that an addiction to foreign oil would evolve into a disruption of the everyday lives of American citizens for decades to come.

And, to be honest, their predictions weren't too far from the truth.

These days though, the sentiment that peak oil is here seems to be fading away, and should perhaps be renamed to something like this: peak conventional oil.

But unconventional oil? Well, that's a whole other story...

“The world has consumed approximately 1 trillion barrels of oil since the oil age began in the mid-19th century,” writes energy expert and engineer Robert Rapier.

The truth is, most of this 1 trillion barrel supply has been produced via conventional oil drilling. There are a few different ways to conventionally produce oil.

The commonality between all of these conventional methods is that companies drill vertically below ground (whether underwater or onshore) and hit a reservoir of oil, called an oil field, then proceed to pump the oil into a well.

Conventional onshore drilling uses a rig that looks something like this... 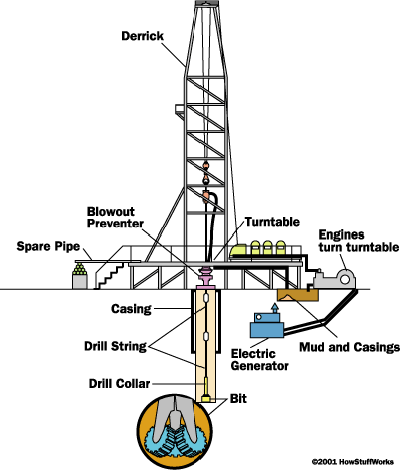 The above shows the various components of an onshore, conventional drilling rig that, although improved upon over the years, has been the blueprint for harvesting oil pooled deep underground for over a century.

Although it looks complex, the system is much simpler than that of a fracking (hydraulic fracturing and horizontal drilling) rig where some other components have to be added in order to extract oil that is tightly locked in shale rock.

Technically recoverable shale oil reserves stand at about 3 trillion barrels, but hardly any has been produced yet...

The reason for that is two-fold: economics and technology.

We Have the Technology

Ever since James “Paraffin” Young first discovered oil oozing from recently excavated shale rocks at the edges of the North Sea in the mid 19th century, we have known that certain shale formations hold a lot of oil.

And, global estimates confirm that the amount of oil locked away in shale is about 3 times that of all the oil consumed since Young's great discovery.

However, the problem with shale oil, and other unconventional oil (such as oil sands) has always been a lack of technology.

That is, until very recently, when technological breakthroughs and high oil prices (more on that in a minute) brought about the use of hydraulic fracturing and horizontal drilling in various shale oil and gas formations.

The technology is now being used in the Bakken, Marcellus, Eagle Ford, Permian Basin, and a few other shale formations throughout the United States.

And since it has been developed and invested in, the technology has grown oil production at an astounding rate.

As you can see above, 48% of U.S. production comes from North Dakota and Texas, two states where shale development has hit the ground running.

And, although Texas has its share of conventional oil left, most of the growth in production that you see is from fracked shale formations such as the Barnett, Permian, and Eagle Ford.

You see, as conventional oil has become an ever dwindling resource, oil prices have risen, and have made the development of shale resources economically viable...

Thanks to fracking, where chemicals and proppants such as sand are blasted into horizontally drilled wells to allow oil to flow from shale, the days of peak oil fear are fading fast.

Although there's still a fair amount of conventional oil left – Saudi Arabia has about 250 billion barrels of proven reserves – most of the new production throughout the world will come from unconventional sources.

But, because of the more complex, energy intensive drilling and refining processes involved in unconventional production like fracking, oil prices will have to stay relatively high for development to continue.

According to recent accounts some say shale oil is viable at anywhere from $60 to $75 per barrel, but that cuts it pretty close.

So as the oil industry transitions from conventional into unconventional production, investors should keep track of who maintains better profit margins.

While we can't just drill and suck up the oil anymore, the tighter window for an oil company to profit means that winners and losers will be very difficult to distinguish on the market.

But, as with conventional oil companies, you can always search for value in those that are expanding their resources, have a great track record and competent management, and are consistently profitable.

Two great examples of this are Continental Resources and Pioneer Natural Resources... 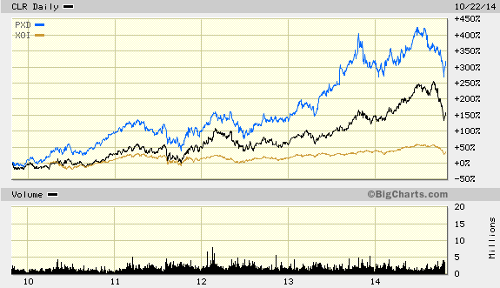 As you can see, these two stocks have outperformed big oil by a combined 675% at their apex this summer when oil prices hit unreal levels.

Of course, since these companies have seen tremendous growth over the last five years, their share prices are a bit higher than we like at Energy and Capital.

The name of the game is all about finding the little guys that have grown profitability and production and whose value is underestimated by the market at large.

For consistent updates on these kinds of opportunities, stay tuned for our weekly mailings where our editors divulge a variety of players that are set up for strong growth in the months and years ahead.