Fracking is Coming Back in a Big Way

The price of crude oil is rapidly on the rise.

Oil recently broke past $70 per barrel for the first time since 2014 after President Trump pulled out of the Iran deal. And many believe the black stuff is set to top $100 per barrel again shortly.

For summer vacationers, that means a much more expensive drive to the beach. But for the savvy investor, this summer's oil prices could mean huge gains. 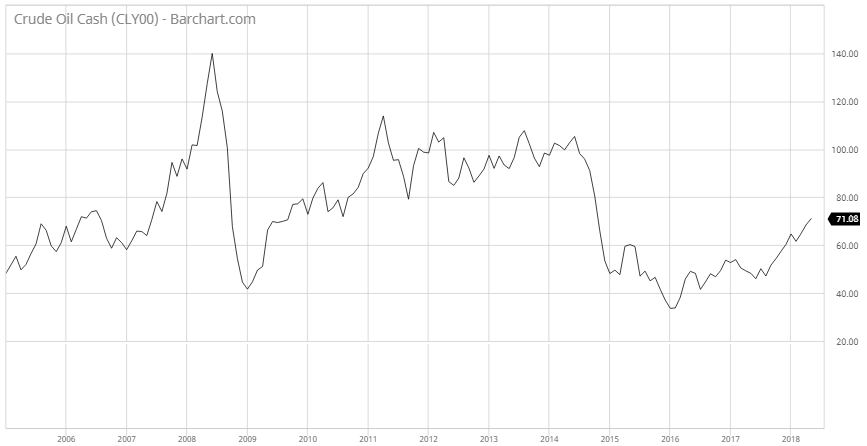 The obvious winners in a $100 oil environment are the crude producers, refiners, transporters... pretty much the entire global energy industry.

But there's one specific sector that I believe is going to grab headlines and investor interest again with higher oil prices this summer: fracking.

Fracking Is Coming Back Into the Spotlight

I'm sure you remember: Between 2013 and 2015, fracking was a big deal. It was everywhere. And everyone was talking about it... financial media, Twitter, and protesters. Heck, in 2014, The Simpsons even made an episode about fracking.

Hydraulic fracturing, or just “fracking,” is a technique that's been around since the 1940s to extract oil and gas from shale rock. But it wasn't until around 2013 or so that most people learned about it.

At that time, oil prices were steady, hovering around the $100 per barrel level. (Take a look at that chart above again.)

High oil prices, as well as a continuing push for American energy independence, made fracking both profitable and politically possible. And there was a big rush into the fracking business back then.

What most people recall about fracking, however, is probably the controversy surrounding the whole thing.

Fracking requires a huge amount of water, which has to be transported to the fracking site and can mean significant environmental impact.

There are also concerns that the process may contaminate local groundwater with carcinogenic chemicals, as well as fears that fracking can cause tremors or earthquakes.

All this ruffled the feathers of environmentalists back then. Yet the benefits of fracking seemed to end up outweighing the costs.

The fracking boom between 2013 and 2015 helped lessen oil prices and increased America's energy independence. By that measure, fracking worked.

After falling for decades, U.S. oil production now stands near a 50-year high. 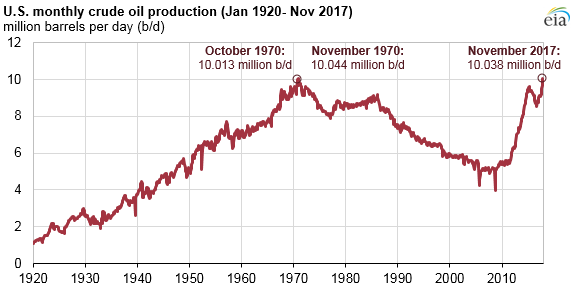 Since 2014, the price of oil has fallen quite a bit. Back in early 2016, oil price were under $30 a barrel. (Again, take a look at that first chart.) In a bit of an ironic twist, lower prices all but killed profitability for frackers, as well as investor interest. And since then, fracking has mostly fallen by the wayside.

But with crude prices back on the rise to $100 a barrel, I think fracking is coming back into the spotlight.

See, one of the main reasons oil prices are on the rise right now is a reduction in inventory caused by a recent collaboration between OPEC, Russia, and others to reduce global supply. These guys got together back in 2017 to support falling oil prices. Now, they're aiming for $100 oil.

In a recent interview with Reuters, an OPEC industry source was quoted saying, “I would not be surprised if Saudi Arabia wanted oil at $100 until this IPO is out of the way.”

The IPO this source is talking about is that of Saudi Aramco. Saudi Arabia is planning to take 5% of the state-owned Saudi Aramco public. This 5% is expected to value the new company over $1 trillion, making it the largest IPO in history. So it's quite understandable that Saudi Arabia wants higher oil prices now. And it's likely that the reduction in global supply will continue for the time being.

When all this eventually does send crude prices to $100 a barrel, it's likely fracking will come back into the conversation as a means of both keeping a lid on oil prices and continuing to facilitate American energy independence.

Certainly, President Trump is not going to want to be jerked around by OPEC.

Most people don't realize just how much oil there is in American shale. A 2016 conservative estimate set total world resources of shale oil equivalent at 6.05 trillion barrels. 80% of those resources are in the United States.

Now consider that there are an estimated 1.6976 trillion barrels of proven oil reserves in traditional oil wells.

Point is, there's a lot of oil in American shale just waiting for higher prices.

And politically, the fracking industry couldn't be in a better position to thrive. Trump has been pro-fracking since well before he was president. 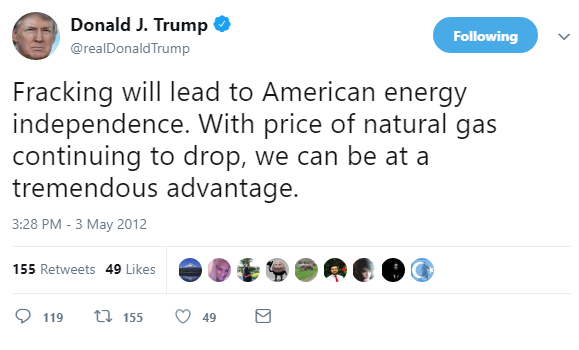 At the end of last year, President Trump rescinded proposed rules for fracking on government lands.

Add to this a Republican-led Senate and House, and everything is positioned for American fracking to come back swinging this summer.

Going into the summer, I expect to see FRAK continue making new highs.

Companies with large fracking exposure in the great North American Bakken shale formation, such as Oasis Petroleum (NYSE: OAS) and Whiting Petroleum (NYSE: WLL), also look to be in a great position to move much higher.

Traditional oil plays — the producers, refiners, and transporters — are bound to rally in a $100 oil environment. But the mostly forgotten fracking plays might have the biggest upside.

Look for cheap fracking stocks to buy up ahead of this summer.