Five Stocks That Will Benefit From the “New Normal”

A Free Bonanza of Money

My cousin started out on a hard road. He was in the middle of a pack of nine siblings with an absent father and a single mom who worked as a secretary at the local Macy’s. They never had enough money, and I remember my grandfather converted the single garage of their duplex into a bedroom for the three boys.

After dropping out of college and washing out of Ranger training, my cousin started working in restaurants. He was driven. At 21, he was a shift manager; at 25, he ran a casual-dining restaurant that was part of a national chain.

Somewhere along the line in the early 2000s, when the Fed was pumping up the money supply and banks were giving away cash to anyone with a pulse, he managed to get a monster loan. He used this to buy five restaurants from his boss who was retiring.

Whenever he told this story he always said, "I wouldn’t have given me that loan.” But it worked out. He added a few pizza places over the years and after 10 years of 80-hour weeks, he was rich.

He lived on the tony side of town, sent his kids to private school, and took fabulous vacations.

End of the Road

Then just a few months ago, his luck ran out. The government response to the COVID-19 crisis has doomed everything he spent his life working for.

He told me if universities don't open in the fall, he will declare bankruptcy by Thanksgiving. His pizza shops, all in college towns, are getting murdered. Last month, after losing money on the curbside pickup, he shut down his five casual-dining restaurants.

About 250–300 people will lose their jobs, many of them well-paying. And that’s before the woe cascades down the supply chain and starts hitting the accountants and companies to whom he pays his rent.

The great irony is that those of us who sit in front of computers and play the stock market are killing it.

The Fed pumping combined with government cash giveaways has pushed the stock market to record levels.

Those catering to the work-from-home “New Normal” are making money hand over fist. 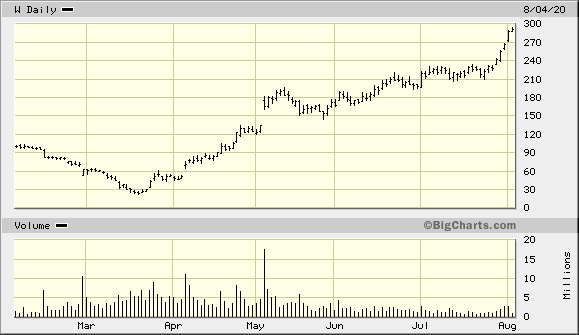 If you think you’ve missed out, don’t worry. The next trillion-dollar stimulus package is winding its way through Congress. There are no fiscal conservatives left in Washington. There is no one who won’t bribe the voters before the election.

In addition, the Federal Reserve has said it will do everything it can to backstop this economy and by extension the stock market.

It's a free money giveaway bonanza, and if you want your piece of the action, you have to be in the stock market. Not only that, but in the right stocks. I’ve found five stocks that will benefit from the “New Normal.”

These are the next Wayfair or Amazon. Click here now before all the easy money is gone.