Fear and Loathing at the MoneyShow

It was Friday night at some moose bar in Toronto, Canada. The Mets were winning the only game they would win in the Series. The woman next to me wore a red and black flannel shirt. The Leafs were losing to the Rangers, the beer was cold, and all was right with the world.

Toronto is a great town. From the racial harmony to the clean streets and efficient nature of the pedestrians, one quickly understands why it is consistently ranked as one of the world's best cities.

The fact that its mayor is a crackhead just adds to the charm.

Mind on Your Money

The town put on the MoneyShow this weekend, and I was honored to be invited to speak. We talked of profitable trends, specifically what I though was going to happen in 2016. I wrote about many of these ideas on Thursday of last week.

My big idea is that Fed can't and won't hike interest rates — though it will lie about it and try to shake the market. The cold, hard reality is that the Fed lacks all conviction. Read the whole thing here.

I also talked about one of the few metals that will launch next year.

It was great having an opportunity to talk with many long-time readers. The dollar versus the loonie was a big topic. The general consensus was to buy the greenback.

One of the fundamental ways in which I differed from other speakers was in my forecast on gold. Now, I'm not a necromancer, nor do I cut open the albino goat on the winter solstice and read the entrails.

I don't know where the price of gold will be next year. Neither does anyone else.

All things being equal, however, I will buy extreme fundamental value at a time when others eschew it.

The point of being a contrarian is that you buy fear and sell greed. When there are more sellers than buyers, equities are de facto undervalued. When the herd turns and there are more buyers than sellers, you can make an outsized profit.

Given the above, one of the first things you want to ask yourself when looking for a stock or sector is, “What does everyone hate?” Right now, the answer to that is junior gold mining stocks. Just look at this chart: 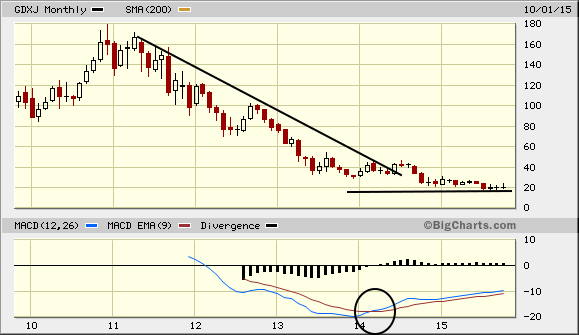 Gold mining stocks give you more bang for your buck than owning gold itself. The opposite is also true in that you can lose 90% of your money when gold drops by 33%.

That said, the chart of the junior gold miners ETF (NYSE: GDXJ) has fallen to the point where the trend line is broken and support is solid at $20. The MACD is bullish with a crossover well below zero.

There are other more fundamental signs that gold has bottomed. The blue chips are showing profits and increased cash flow.

Barrick (NYSE: ABX) has put out two quarters of optimism. It cost of production has dropped from $835/oz to $771/oz. Newmont (NYSE: NEM) is telling a similar story and pointing to the low oil cost as a benefit. Gold production is a high-energy business and requires a great deal of oil.

I am bullish on the gold mining sector.

That said, you want to look first to cash flow and balance sheets. There will be winners and losers. Many of the worst companies have already declared Chapter 11. Others will be bought out.

I've found one mining company that has a market value equal to the amount of cash it has in the bank and zero debt. In other words, you get the company, the metal reserves, and whatever trucks it has sitting around for free.

That's right; the market hates miners so much right now that they are giving them away. I'm working on the research report now. I'll put it out in a few weeks.

Keep your stick on the ice,