Crackdown on Energy Speculation is a Good Thing

To-morrow, and to-morrow, and to-morrow,
Creeps in this petty pace from day to day
To the last syllable of recorded time,
And all our yesterdays have lighted fools
The way to dusty death. Out, out, brief candle!
Life's but a walking shadow, a poor player
That struts and frets his hour upon the stage
And then is heard no more: it is a tale
Told by an idiot, full of sound and fury,
Signifying nothing.

I don't know if it's because oil is staying stubbornly above $60, or because it's just that time of year. . . but the annual spectacle over the influence of evil oil speculators is once again under way.

Only this time, it will have real consequences.

In a three-day series of hearings this week, the Commodity Futures Trading Commission (CFTC) heard arguments about the influence of speculators on the oil and gas markets, and considered new trading limits.

The CFTC issued a report last year concluding that index traders were not to blame for excessive speculation, and that prices had spiked as the result of normal supply and demand factors — a conclusion I fundamentally agreed with. But after reconsideration of new and allegedly better data, Commissioner Bart Chilton clearly means business this year. The time for debate was over, he said this week, and "whatever manner the agency proceeds, 'going slow' is not an option.''

It now seems inevitable that some sort of new technical limits will be imposed on the size of positions traders can hold, how they can be traded, and by whom. In particular, the Commission has set its sights on chasing out purely financial speculators who don't need the contracts to hedge their own business needs (let's take airlines hedging the future price of fuel for example) or who don't intend to take delivery of the commodity (for example: refiners who bid for crude oil).

A new CFTC rule was applied this week, setting position limits and accountability levels on the trade of natural gas contracts on the Intercontinental Exchange (ICE). Some traders had used the ICE to skirt stricter limits on the NYMEX exchange.

NYMEX also moved to set more conservative limits on the size and timing of its trades, presumably as a preemptive attempt to ward off further incursion by the CFTC into its activities.

In turn, the United States Natural Gas Fund (NYSE: UNG), by far the largest fund providing exposure to the natural gas futures market, announced on Wednesday that it would reduce its position in the ICE. The fund's holdings in the ICE have indeed been huge, comprising anywhere from 60% of the fund (according to broker Raymond James) to a rumor claiming closer to 80%. The fund has been bursting at the seams with incoming capital, having recently hit its limit on buying more contracts, and is currently awaiting the decision of the SEC on its request to issue up to another billion units. The fund lost 3.26% on the day in reaction.

Naturally, the commodity trading world erupted in cries of outrage, with analysts fussing over the prospect of reduced liquidity, poorer price discovery, and the possibility that the new rules would force the trade into less regulated over-the-counter markets.

Methinks the lady doth protest too much.

For one thing, when we're talking about commodities like oil — which trades over 84 million barrels per day on a global scale — I have little patience for the liquidity argument.

As for price discovery, it seems to work just fine at lower levels of volatility.

And the CFTC is already seeking new authority to regulate the OTC markets.

CFTC Chairman Gary Gensler holds the more regulated agricultural markets out as an example of how the energy markets should work. Let's take a look at that thesis. . .

Consider this chart of the Dow Jones-UBS Grains Subindex Total Return ETN (NYSE: JJG), which tracks the performance of soybeans, corn, and wheat, as compared to oil and gas contracts: 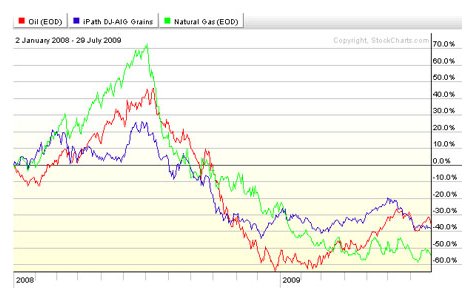 In a nutshell, what the CFTC seeks to dampen is the volatility of the oil and gas indexes, so that those green and red lines run a little closer to the blue line.

I have no problem with that. In the real world, severely oscillating prices for critically important stuff like oil and gas affect the entire economy, and the extra froth that speculative traders add to the market wreaks real damage. When prices for oil and gas rise too high too quickly, they take a big bite out of everything from wages to steel production. And when they fall too low too quickly — as they did this year — it kills drilling and production. The result is less supply in the future, and an increase in the likelihood of future price spikes. A few percent difference in the range of overshoot and undershoot has outsized effects.

For such critical commodities, it makes a certain amount of intuitive sense that those who intend to actually take delivery of the stuff should dominate the trade, not financial institutions. Commodities shouldn't be treated as just another asset class when their volatility literally means life or death for people and whole sectors of the economy. Less volatility would also offer better visibility for investment in future supply, which is crucial at this time.

Furthermore, the overweening influence of big banking and hedge fund money is now roundly proven to be a real danger to the health of the economy. Let them cry and moan. . . they have no legs to stand on, and they need to be cut down to size.

On the other hand, it also seems obvious that had oil only risen to $125 a barrel last July instead of $147, it wouldn't have made consumers much happier. The damage would have been a little more limited, but not enough to stop the juggernaut of massively deleveraging markets, and not enough to win a congressman more popular kudos.

Less volatility also means higher lows. Were the oil and gas trade as moderate as the grains trade, we would not now be looking at $3.60 natural gas, but more likely something closer to $4.50. In turn, we would now have higher prices for grid power, petrochemicals, fertilizer, basic metals, and building materials.

And oil prices might be more or less exactly where they are now, having seesawed to their lowest and highest points, to find some equilibrium again in the $60s.

Even so, I applaud the CFTC's effort. Tighter regulation will hopefully put to rest the blathering of pandering lawmakers and the shrieks of uninformed consumer advocates, and let the market get on with its business of price discovery and moving capital where it is needed. There is damage done by uncertainty, too. . . just ask UNG about what it's cost them to be in limbo under a fog of CFTC rumors.

Then the next time oil and gas prices spike, perhaps we can have an intelligent discussion about the fundamental reasons for such an event, like peak-oil-induced supply limits and the role of the dollar. We might finally see that the economy is simply bumping its head against a descending ceiling of supply, instead of running off on another useless hunt for scapegoats.

Once the sound and fury over bogeymen speculators subsides and lawmakers start getting their heads around the real problems, we can have a serious dialogue about how we're going to navigate our energy future.

Investor's Note: As I mentioned earlier, oil prices are stubbornly staying above $60 a barrel. My colleague, Ian Cooper, has discovered an economic catch-22 within the oil markets that has been making a fortune for his readers. You see, after oil prices crashed in 2008, he knew it was the chance of a lifetime for investors. And this little-known investment is perfectly positioned to take full advantage of oil's wild price swings. . . Click here to learn more about this shocking opportunity.