When Brian Hicks, owner and founder of Angel Publishing, started writing articles about Peak Oil, he was practically laughed out of the industry. This was in 2004.

At the time, the idea that the world could run out of oil was relegated to tinfoil hat-wearing basement dwellers from the dark side of the Internet.

As you can see, Brian was correct at the time, and his articles would later become a highly-acclaimed book within the energy sector: Profit from the Peak.

The price of oil has risen like we are running out of it... 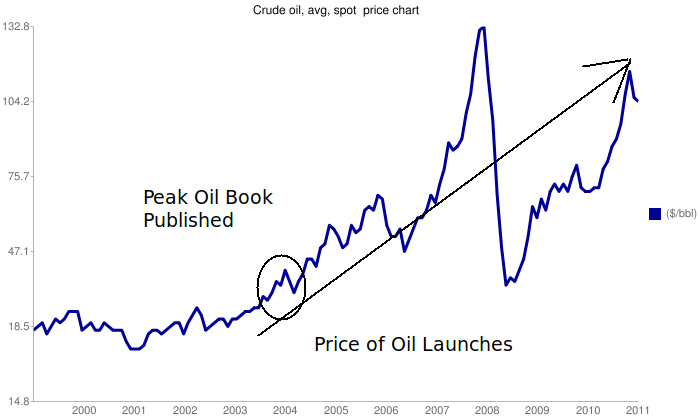 Now, of course, the idea of a limited supply of cheap oil is all-too common.

To tell you the truth, I had my doubts at the time about Peak Oil as a theory.

I dislike any “this time is different” investment philosophies... but you'd have to be a fool not to participate in the biggest oil run ever.

Two weeks ago, I returned from Ulaanbaatar, Mongolia. The biggest concern for most companies I met with there is the shortage of diesel needed to run the mining operations.

When they cut off the flow, Mongolia suffered. The country imports 90% of its oil from Russia.

Russia is in similar bind to many Middle Eastern countries in that its own wealth is limiting the amount of oil it can export — the very thing that made it wealthy in the first place.

This situation has since changed. Last week, Moscow reversed its high export tariffs and is now sending more diesel to Mongolia. But the Mongolians are well aware of their dependence on Russia, and are hastening to build their own refinery and develop their oil business.

(I spotted this trend last year, and Crisis and Opportunity readers made as much as 1,059% on a $351 million oil company with more than 2 billion barrels of oil.)

The country is pumping out just over 10 million barrels a day with no capacity to spare, making it the biggest producer of oil in the world.

But as the oligarch Putin said recently, “Older fields are getting tapped out and incentives are needed to stimulate production.”

It's hard to understand where all this new oil will come from. Mongolia is one such place with estimated reserves at more than six billion barrels.

Kenya: Where Cars Go to Park

About a month before I took a 30-hour trip to UB, I flew Ethiopian Air to Nairobi, Kenya.

When I arrived, I discovered two things: Successful Somali pirates were buying up all the real estate in the nice part of town, and the country was having a gasoline shortage... and I was there for an oil conference!

The problem with the middle class isn't that they can't afford cars; it's that they can only afford to buy gas on payday.

Kenya is another country that can add to global oil production. There are some startling estimates regarding the amount of oil and gas that can be found in East Africa.

Back here in the good ole United States, the price of oil hit $99 a barrel today. But Brent crude (the price the rest of the world pays) is at $117.83. I paid $3.59 a gallon to fill up my bright yellow Hummer today. And we all know that price is only going up...

Things are getting so bad I went out and test-drove a Cadillac DHS. At 22 miles per gallon, it will cut my fuel cost by two-thirds!