I Was Wrong About Electric Cars

The higher the gas price, the more vibrant the market for fuel-efficient vehicles.

But maybe I've been wrong...

Gas was cheaper in 2013 compared to 2012, yet sales of hybrid and electric vehicles enjoyed double-digit growth over 2012 numbers.

So what's the story? If gasoline is cheaper, why are folks actively seeking out hybrid and electric cars that tend to have price premiums attached?

It's hard to pin down any specific reasons for this. Heck, it could just be a fluke. After all, we only have about 6 years of solid data.

Still, for a market that's been treated like a leper by the old guard gatekeepers in the auto industry and on Wall Street, sales growth since 2010 has been quite impressive... especially when you add in the decrease in gasoline prices. 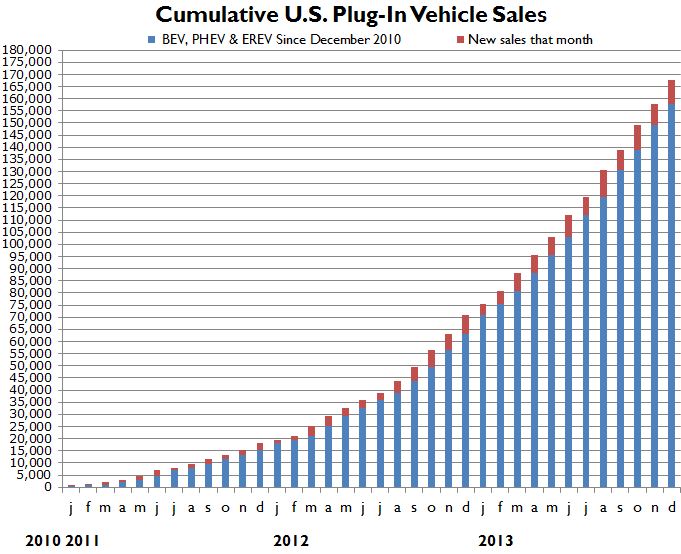 This is nothing to brush aside — even if total numbers remain rather minuscule compared to the more than 15 million new internal combustion vehicles sold last year in the U.S.

For investors, it's not the total number that matters as much as it is the growth curve.

Bringing in the Fence-Sitters

Like I said, I'd always believed the key motivator for electric car purchases was high gas prices. But that may not be the case. In fact, estimates for 2014 show an 86% increase in sales, while AAA estimates another decline in gas prices this year.

So what would motivate consumers to buy an electric car, particularly when most tend to be priced out of reach for many Americans?

Well, one thing could be the decrease in price from manufacturers.

In 2013, we saw retail prices fall for the Chevy Volt, the Nissan Leaf, the Ford Focus Electric, and the Mitsubishi I.

A combination of increased production and a desire to get more of these vehicles on the road (despite the erosion of margins) has certainly brought in a lot of fence-sitters.

Continued price reductions are also a lock going forward as battery costs continue to fall rapidly and software developments are increasing fuel economies, thereby making the ROI more attractive for consumers (although, again, how much of a difference the ROI makes is tough to determine if gas prices continue to fall).

I think there's a lot to be said about early adopters and tech geeks who simply want the most advanced auto technologies parked in their garages and driveways, as well. It's unlikely you'll meet a single Tesla Model S owner that doesn't have a passion for technological advancements and the latest, greatest gadget.

There's also little reason to discount the effect of environmentalists. Many find them easy to mock, but it would be wise to remember that environmentalists can have a significant impact on sector growth. The rise of organic food retailer Whole Foods (NASDAQ: WFM) is a perfect example.

Although there's no data to verify that environmentalists serve as the largest contingent of electric car owners today, I do believe their support of the industry — both as consumers and proponents — is relevant and should not be overlooked.

Then consider some of the reasons to go electric that don't typically pop into your mind right away... Access to HOV lanes, free parking in a number of cities, the backup power electric cars can provide when the grid goes down, reactions to recent megastorms that left thousands of gas stations inoperable, and, for some, even a metaphorical middle finger to oil-producing nations that don't have much love for the United States (although, in the scheme of things, the amount of oil we get from those nations is quite low and continues to get lower with every new fracking well put into production in the U.S.).

I suppose we could have a full-blown debate on what causes consumers to be drawn to electric cars, but right now, all I see is a very impressive growth curve and a lot of reasons to be bullish on electric car development going forward.

I'm not suggesting electric vehicles are going to overtake internal combustion anytime soon. I am suggesting, however, that if electric cars penetrate just 1.5 to 2% of the overall market by the end of the decade, this will be a very big deal and a glaring indicator that electric cars are not only here to stay, but will add market share faster and faster over the next few decades.

As an investor, you should not ignore this market.

In fact, I wouldn't even chalk this up to a play on the automobile sector but, instead, the technology sector.

Sure, they have wheels and motors and headlights, but it's the technology that's facilitating the explosive growth in electric vehicles...

Just as robots are proving to be huge technological advancements that are making investors a ton of money, electric cars will bring in a windfall for the savvy.