The towering flames and thick black smoke could be seen from miles away.

The intense heat from the fire melted the asphalt...

Anyone within 100 feet of the blaze ended up covered in second degree burns.

Seventeen fire trucks were called in, joined by an army of hazmat fleets racing to the scene of the inferno.

This is how most mainstream media dolts would have loved to tell the story about a recent electric car fire. And although it wasn't quite this hyperbolic, there were still few media outlets covering this one that didn't choose to paint a very dishonest image of failure and fear.

Earlier this year, a Chevy Volt caught fire three weeks after it had been crash-tested by the National Highway Traffic Safety Administration (NHTSA).

Despite a number of rigorous crash-tests conducted by both GM and the NHTSA, this is the only case of a battery-related fire in a crash or crash-test of vehicles powered by lithium-ion batteries.

But let's face it; that little tidbit doesn't make headlines... nor did the story about the Chevy Volt that was totaled after a collision with a bus — and everyone in the vehicle walked away unharmed. 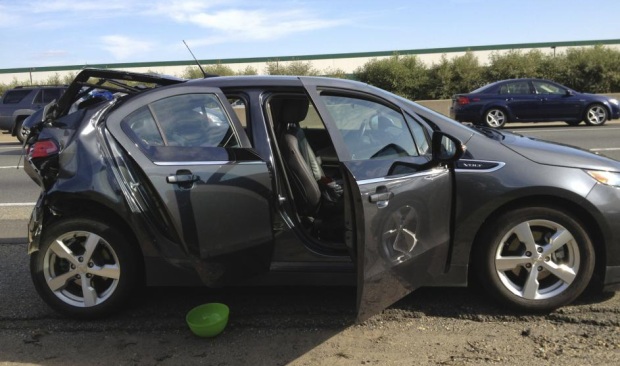 Of course, none of this matters.

Media outlets need to sell advertising. And nothing sells like a good old-fashioned car fire — unless, of course, it's an electric car fire!

But while partisan slaves and ideological zombies continue to devour the media lies and empty Washington rhetoric, we prepare to take advantage of mass integration of electric cars.

And so we continue to plan on the rapid depletion of our remaining recoverable oil supplies by investing in two areas.

The first is easy: oil.

More specifically, some of the largest recoverable oil supplies on the planet.

Located in the Dakotas, not only are these operations going to keep our outdated internal combustion engines running for decades to come.

The second way to play this is alternative transportation fuels and technologies.

And there are plenty — including next-generation biofuels, natural gas-powered trucks, high speed rail & mass transit, and of course, electric vehicles.

What They Forgot to Mention

While the most recent electric vehicle headlines have been monopolized by the Chevy Volt fire (something that happened about five months ago),the industry continues to move at light speed.

Here's what the mainstream media has neglected to report:

Yes, my friends, that Chevy Volt was on fire. And so is our portfolio, thanks to the rapid development of the electric car market.

To get complete articles and information, join our daily newsletter for FREE!
Plus receive our latest free report, "Investing in the Future of Thorium"