Earth’s Gasoline Dynasty Is Coming to an End

Our newest contributor, Luke Sweeney, has been hard at work studying the electric vehicle market and the science that drives it. In his research below, you'll see exactly how investors can capitalize on this explosive market.

Luke’s technical know-how and unrelenting scientific curiosity have helped us narrow down some of our most promising investment opportunities in the tech sector.

Check back in with us every Monday for Luke’s analysis of the most exciting energy and tech developments the market has to offer.

What will YOU be driving when gasoline-powered vehicles are banned?

After a century of competition-free growth, is the era of internal combustion engines (ICEs) coming to an end?

Frankly, it's been a long time coming. Mankind is shooting itself in the foot by ignoring the future of transportation.

So what's stopping them?

Why haven’t these “superior” fuels stolen the spotlight yet?

The ability to hop in a car and drive almost anywhere is a triumph almost 50 years in the making. Even the most advanced car on the planet is useless without a complete network of refueling and repair services.

As of now, only one type of engine allows for long driving range, easy refueling, and worldwide support.

But that’s about to change…

And for the most part, the public is highly in favor of getting gasoline vehicles off the road. 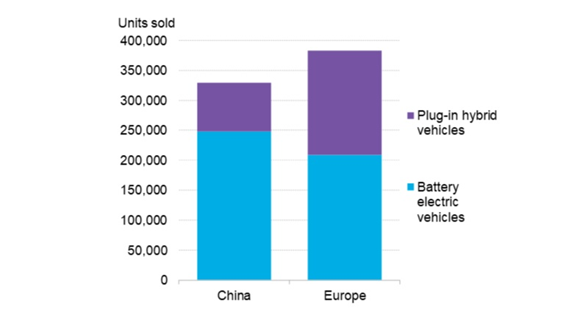 From a performance standpoint, it’s really not a fair fight.

Many consider today’s EVs to be superior to ICE vehicles in nearly every metric.

That is, every metric except one: convenience.

Now, there’s a key disadvantage when comparing gasoline vehicles with electric vehicles. Remember, we’re comparing a completely new generation of electric vehicles against an industry of traditional cars that have been developed and improved upon for more than a century.

And clearly, comparing a modern electric engine with some of the earlier ICEs would yield entirely different results.

Given the same amount of development and improvement that ICEs had, an EV would be miles ahead of any comparable vehicle.

Millions of miles of roads, hundreds of thousands of gas stations, and countless other structures gave ICEs a competitive edge in the market. So far, EVs are still playing catch-up.

Lacking convenience is a death sentence in today’s economy. On-demand services and same-day shipping are setting the bar at an unsustainable level.

For now, the EV industry can't compete with a five-minute fill-up at a gas station. And for many potential buyers, the lack of nearby charging areas has been causing serious range anxiety.

That range anxiety is manifesting as buyer anxiety. In a recent poll, almost 50% of EV skeptics said that low range and lack of access to chargers are the main reasons they're not switching over yet.

They don't want to get stuck holding the bag if a new standard pops up in the next few years.

While this overly cautious approach works in some cases, it rarely generates the type of massive gains we're aiming for.

Some more forward-thinking companies are going all-in after getting the green light from the government.

Thanks to a tailwind from President Biden’s massive infrastructure bill, we could see charging stations becoming a standard feature of more than just gas stations.

The trillion-dollar stimulus bill is set to pour huge amounts of money into the waiting hands of a few elite players in the EV market.

Roughly $15 billion in funds has been earmarked to create a nationwide ecosystem of charging stations that can compete with gas stations.

Since EV drivers need more time to charge their cars, any business that brings customers inside (think restaurants, movie theaters, even grocery stores) could benefit from a charging setup.

This transition to an all-electric world is a once-in-a-lifetime opportunity few in the investment herd have recognized so far.

As an investor, let me show you the next step.

You see, my colleague Keith Kohl has been carefully combing through the market to target which stocks stand to make a fortune for their shareholders.

And after months of painstaking research, Keith and his readers are finally pulling the trigger.

I strongly recommend you take a few minutes and see the opportunity Keith and his team uncovered firsthand.

Click here to check out all the details — at absolutely no cost to you.