In an effort to placate some voters who, for some reason believe electric vehicles will turn you into a Marxist, Herschel Walker told a crowd of supporters that the U.S. should keep gas-guzzling cars that produce good emissions.

His words, not mine.

We're not prepared. We're not ready right now. What we need to do is keep having those gas-guzzling cars, 'cause we got the good emissions under those cars. We're doing the best thing that we can.

What the hell does that even mean?

We’re doing the best we can?

Don’t get me wrong.  It’s not as if I expect much from any politician these days.  And Walker isn’t the only person to deliver this kind linguistic Luddism.  But what makes this particularly interesting is that he’s actually shitting on something that’s worth billions of dollars to his home state of Georgia.

Last month it was announced that Hyundai (OTCBB: HYMTF) broke ground on a $5.5 billion electric car manufacturing plant in Bryan County, GA.  That’s billion, with a “B.”

The plant is expected to open in 2025, and employ at least 8,100 employees.  State officials also anticipated in excess of 1,000 indirect jobs related solely to Hyundai suppliers, which are estimated to invest more than $1 billion in the Peach State.

And of course, this kind of investment will also result in billions of dollars in new economic activity in real estate, hospitality, banking, construction, auto sales, food production, etc.

The factory, which will ultimately end up producing 300,000 electric vehicles per year, is one of the largest economic development projects the state has ever had.

This is transformational for the region, not just for people’s children now, but for their grandchildren. This is going to be a project that will resonate for generations to come.

Of course, Georgia has long been very supportive of the electric vehicle market.  And for good reason.

According to the Georgia Department of Economic Development, since 2020, more than 30 electric vehicle-related projects have contributed more than $13.3 billion in investments in Georgia.

And while not as impressive as what we’ve seen in California or Texas, the state of Georgia has enjoyed significant sales growth in the electric vehicle sector over the past year, growing nearly 30% from 2021 to September, 2022.

So why would Herschel Walker go out of his way to dismiss a market that’s going to employ tens of thousands of people while generating billions of dollars in economic activity?

Because he doesn’t know any better.

And I don’t say this to criticize him from a political standpoint.  I have no home on either side of the aisle. To quote the great Carlton Douglas Ridenhour, “neither party is mine, not the jackass or the elephant.”

My focus here is simple: supporting and profiting from a market that is ultimately going to make the internal combustion vehicle as relevant as the rotary phone.

As reported by Bloomberg New Energy Finance, 58% of global passenger vehicle sales will come from electric cars by 2040. By 2050, that number will exceed 70%.

The transition away from internal combustion to vehicle electrification is well underway, and those who invest early stand to get the most bang for their buck.

Certainly we saw that with Tesla (NASDAQ: TSLA), with early investors making an absolute fortune. 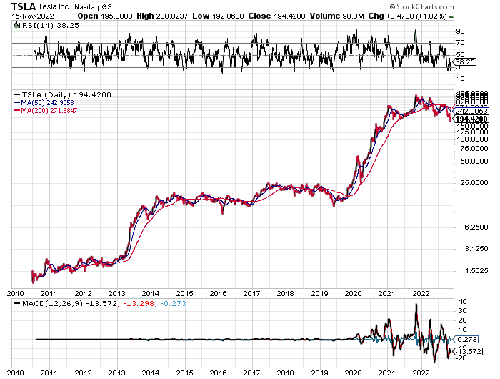 And this transition is still in its earliest stages.

Other stocks that could perform quite well in the coming years as a result of electric vehicle growth include, but are not limited to …

Bottom line: no matter what nonsense falls from the mouths of politicians, the future of transportation IS electric.  And unless you hate money, you’d be wise to profit from this transition, instead of mocking or trivializing it.