They say the United States is in a lot of debt — $21 trillion worth of debt is what they write in the papers...

Is that a lot? It sounds like a lot, but how do we know?

To put this in perspective, the total output of the U.S., the combined forces of 320 million people busting ass and working hard, is $19.7 trillion a year.

I remember when I was a young lad, the talk on the Sunday morning circuit was that Ronald Reagan added $1.86 trillion to the debt over eight years, a 186% increase from the $999 billion debt at the end of Carter’s last budget.

Folks thought that was crazy, and it was...

But it was just the beginning. Despite the slight decline under Clinton, the U.S. government debt has kept on growing. 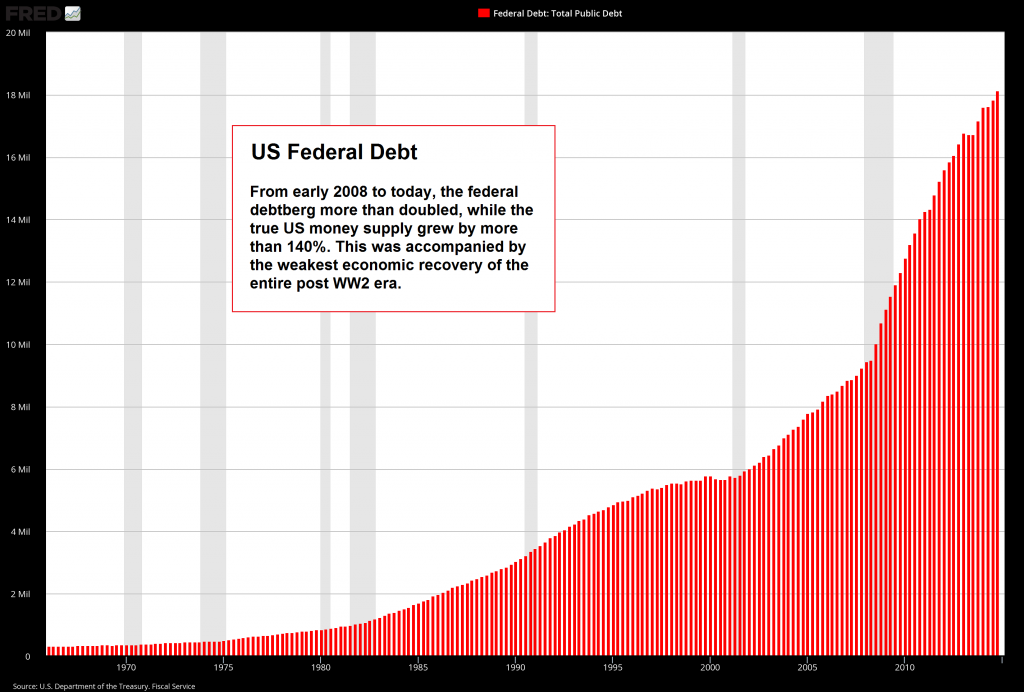 The blue chart shows the 10-year Treasury interest rates over time. When interest rates started dropping, debt took off. This is because the cost of money got cheaper. 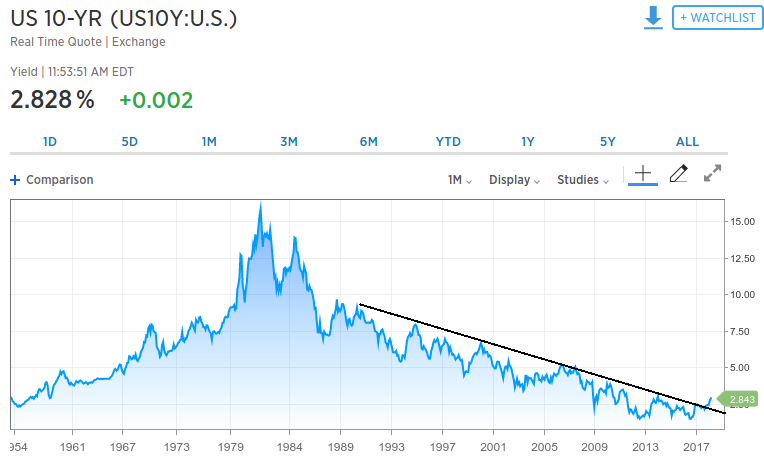 The 10-year Treasury is the basis for mortgage rates. For the past 38 years, it fell.

For almost two generations, you could pull cash out of your house, buy a car, a timeshare, a new boat, and send your child to college. And still your monthly payment went down. It’s been free money!

But what about the future? Will the government keep spending even if the cost of money goes up?

Last week, President Donald Trump signed a one-year $1.3 trillion spending bill. It sends $700 billion to the military and $591 billion to domestic agencies. Military spending will increase by $66 billion over last year, and non-defense is up $54 billion.

Including interest, this bill will add $1.7 trillion to the federal debt over 10 years, and the Treasury will run a trillion-dollar deficit every year going forward.

Meanwhile, back at the ranch, the federal debt is now more than $21 trillion and is growing faster than GDP.

If you continue that growth rate (and there is no reason to think it will stop — both Republicans and Democrats have proven that they will spend), then we will have $46.85 trillion in debt by 2028.

As I write this, the 10-year is at 2.82% and rising. One major question on Wall Street is if the long-term downtrend in rates has now reversed, how will the government pay for all of this new debt on top of the old debt?

There are only three ways, and all of them are bad: default, raise taxes, or create inflation.

Which is why I’ve created a government-proof portfolio in Christian DeHaemer’s Bubble and Bust Report. At the same time, I know an investment trend when I see one. Find out how to profit from the endless growth of the federal government.