Written by Christian DeHaemer
Posted May 21, 2019

Many years ago, at a posh resort on the left side of Costa Rica, I golfed among the monkeys and alligators with a man who told me the secret to success. This man was in his mid-30s, good looking, wore a shiny Rolex, and dressed in the expensive golf fashion of the time.

“Christian,” he said, as he whipped his driver in big practice swings in the tee box, “the secret to success is debt.”

“All of those bullshit stories they run in Fortune, Forbes magazines about paying off debt early or not going into debt at all are completely wrong.

“Oh, and by the way, those magazines are written by indebted journalism majors with zero business experience...

“When I got out of college, I moved to New York and took on as much debt as the bank and credit cards would let me. I rented a nice apartment, bought an expensive suit and this Submariner,” he added, shaking his watch at me.

“You must have had a nice trust fund,” I replied.

“Far from it. My dad sold cars. I went to a state school.

“The question is how did I pay for it. Well, I went to work. I had a degree in advertising and shopped my resume everywhere. I worked freelance at night — sometimes for free — until I gained traction in the business and then kept on working, doing everything I could to make money and get ahead.

“By the time I looked up a few years later, I had a couple of nationwide beer accounts, a great wife, kids in private school, and a beach house on the Jersey Shore...

“Debt was the motivation of my success. It was an all-in commitment. I was either going to get rich or go bankrupt. Plus, wearing a $2,000 suit changes how you and those around you play the game.”

Debt, in my friend's case, was the answer to success.

It also works on the national level. We owe the idea of national debt, like so much, to the English.

In the late 1690s, the British suffered through wars and revolution, bad kings and devastating battles with the Dutch.

In 1690, the British Navy was defeated by the French in the Battle of Beachy Head. Without the Navy, British trade suffered, and the economy was in shambles.

England needed 1.2 million pounds to rebuild its fleet, but its coffers were empty. So it came up with an ingenious idea: Instead of stealing the money from the people in the form of taxes, it would borrow it and pay 8% for good measure.

In 1694, the governor and company of the Bank of England was incorporated and given exclusive access to the government’s balance sheets and exclusive rights to issue banknotes. Lenders exchanged bullion for banknotes, and the necessary funds were raised in just 12 days.

A new Royal Navy was built, which led to early industrialization of transport systems and metalworking. This Navy protected and expanded trade routes, which in turn brought in more money. 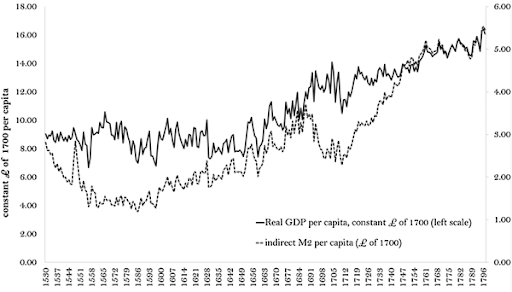 You can see the bottom of the English economy in 1700 and then a constant expansion for the next 100 years, though it really didn’t take off until 1820 or so.

All Things in Moderation

It was the creation of national debt that allowed England to punch well above its weight and build a global empire. But at some point, debt becomes too much. When you can’t pay it back, it starts to become a problem.

But whose problem is it, the borrower or the lender? Next week, we’ll hear some stories of woe — when debt goes bad.

The Green Revolution: Resistance Is Futile.
Energy and Capital editor Luke Burgess explains why he understands the conservative perspective about being hesitant about green energy but why it just makes sense at the moment. Here's a hint: follow the money...
Uber of the Sky: All-Electric Flying Taxi Unveiled
Munich-based Lilium showed off its five-seater all-electric flying taxi prototype this week to what it hopes will be a highly interested future market. Energy and Capital editor Luke Burgess imagines what this market could look like.
Buying Pre-IPO Pot Stocks
Although you can make plenty of money buying and selling stocks on the open market, there’s no doubt that the most profitable wealth-building technique involves little more than buying stocks before they go public.
Hydrogen Fuel Cells: The Downfall of Tesla?
Lithium has been the front-runner in the battery technology market for years, but that is all coming to an end. Elon Musk is against them, but Jeff Bezos is investing heavily in them. Hydrogen Fuel Cells will turn the battery market upside down and we've discovered the tiny company that is going to make it happen.