Oil prices continued heading lower on Friday as OPEC failed to convince Russia to agree to the additional production cuts the cartel was hoping for.

Reuters reported overnight that a "high-level Russian source" told the news agency, “Moscow would not back an OPEC call for extra reductions in oil output and would only agree to extending existing OPEC+ cuts.”

OPEC was reportedly looking for a production cut of an additional 1.5 million barrels per day (bpd) through the rest of the year, with non-OPEC states contributing 500,000 bpd to the overall curb. Earlier this week, it was reported OPEC was hoping for a cut of 1.2 million bpd.

The newest deal, however, would mean an output cut totaling 3.6 million bpd, or about 3.6% of global supply. But Russia wasn't having it.

So is oil still a “screaming buy” as I wrote on Monday?

When I wrote to you on Monday, the price of WTI was just over $45/bbl. So oil prices really are not that much lower than they are today. The price of oil started to recover through Wednesday but then began to fall again along with stocks as continued economic fears stemming from both global recessions and coronavirus concerns weighed down on the market (more on nCov at the end of this article).

But here's the thing folks: in the big picture, we don't need to be worried about these kinds of short-term movements. In fact, we should celebrate them.

As I said on Monday, crude oil is still absolutely necessary to global economies and markets. That hasn't changed.

While OPEC and its allies may continue to squabble in the short-term over who is going to make cuts and by how much, the long-term demand for oil demand remains stable.

According to the IMF, IEA, EIA, and every other major energy agency, oil consumption will continue to grow through at least 2040.

Global recessions or viruses do nothing in the way of slowing crude demand over the long-term.

Is that just wishful thinking?

No. And the futures market agrees.

After falling into backwardation in February, WTI futures are now back in contango — suggesting higher prices over the coming months and years. Take a look at futures contracts through 2026: 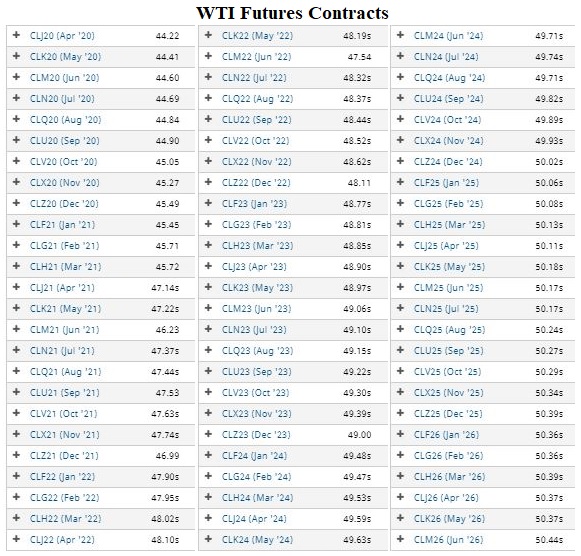 Brent futures are the same — also now back in contango.

In the short-term, there's no telling where   will bottom. But you can be absolutely certain they will, in fact, bottom sooner than later.

Investors should use today's drop as another opportunity to add to their energy positions.

And gratitude should go out to Russia for being hardheaded. They just provided us with a great opportunity to own one of the world's most important assets at a discount price.

So to Russia, I say, большое Вам спасибо. The next round of vodka and pickles is on me.

A quick word on coronavirus before I leave you today...

While the mainstream media continues to stir fears surrounding the virus, I think it's very important to remember there are more closed cases than active cases now.

The media will very likely sensationalize nCov today as the total number of reported cases crosses 100,000. That's what they do — fear and anger are the two biggest emotions the mainstream media uses to get your attention.

What they're not telling you about nCov, however, is that nearly 60,000 of those reported cases have been resolved, with 94% either recovered or discharged.

Moreover, they're not telling that the majority of people killed by nCov have either been very elderly or had pre-existing conditions.

I write this to you, as the first three cases of coronavirus were confirmed in my home state of Maryland last night. And according to reports, those three cases are being treated less than two miles from my house.

Call it optimism bias if you will. But I'm not shook by this in the least bit.

Oil is a Screaming Buy
The price of oil took a one-two punch during the first two months of 2020, falling almost 26% year to date. Energy and Capital editor Luke Burgess makes the case for why oil stocks are a screaming buy right now...
Is It Time to Buy Oil?
Watching WTI prices fall below $50 per barrel for the first time in over a year, even the best of us can get that bearish twinge of concern. Energy and Capital editor Keith Kohl questions whether it's time for investors to dip back into the oil sector or call it quits...
Hydrogen Fuel Cells: The Downfall of Tesla?
Lithium has been the front-runner in the battery technology market for years, but that is all coming to an end. Elon Musk is against them, but Jeff Bezos is investing heavily in them. Hydrogen Fuel Cells will turn the battery market upside down and we've discovered the tiny company that is going to make it happen.