According to MarketWire, the agreement consists of five contracts that will explore the upper and middle basin. The meat of the deal is in the Santa Isabel contract—covering a total of 334,000 acres of shale oil potential.

Both sides will walk away happy from the deal, since “Texas’ ConocoPhillips will get 70% of any shale oil found in the deeper areas while Canacol would retain the other 30% and keep 100% of the rights of shallower reservoirs,” according to MarketWatch.

On ConocoPhillips’ end, the company will cover the drilling and testing costs of 13 wells, which adds up to $13.5 million. It also made plans to invest another $12 billion in places like Algeria, Kazakhstan, and Nigeria.

The Colombian deal drew praise from market analysts, who believe that such an agreement will open new doors in the Colombian oil market. Daily crude output grew 40% from 2009-2011 in Colombia, according to MarketWatch.

But Colombia is not the largest oil bearing nation in South America. Venezuela has some of the largest oil reserves on the continent, concentrated in the Orinoco Belt region.

These companies were forced to hand over 60% of oil profits to state-run oil company PDVSA, according to Venezuela Analysis. Chavez sought to downsize foreign companies into minority stake holders, with the majority of profits in the hands of the state. Even though Chavez still sought foreign investment, the change placed a sour enough taste in ConcoPhillips to cease drilling operations in Venezuela.

What does this mean for Colombia?

Because of nationalization in certain parts of Latin America, many oil companies have turned to Colombia. The Canacol-Conoco deal renewed the zest for oil exploration in Latin America and will solidify Colombia as the most stable oil investment nation in South America.

This chart from 2009 shows Colombia and Ecuador as two of the top South American nations for foreign oil company investments. 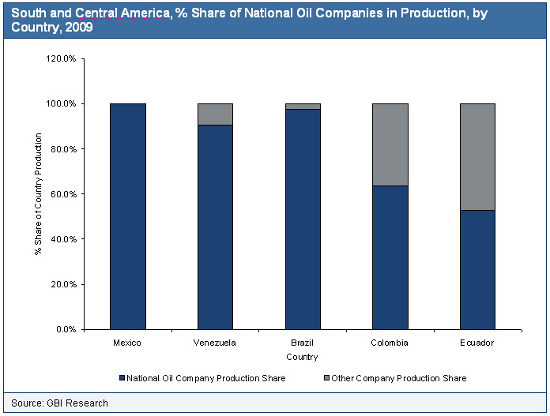 Ecuador has been a solid source of investment, but Chevron dealt with a drawn-out and contentious lawsuit in which locals blame the oil company for polluting the Amazon. Furthermore, an Ecuadorian appeals court upheld a ruling that forced Chevron to pay damages for the pollution, according to an article by BBC.

The fallout from this court battle may have consequences for other oil companies in the nation, and oil investment in Ecuador may not become as lucrative in the future. This may help Colombia in becoming the new source of South American oil-flow in the future.

If you are an investor looking to place a stake in Latin American oil, it may be prudent to stay away from leftist and populist governments. Even Argentina, an ally of the United States, nationalized its oil fields in 2012 under populist President Cristina Fernandez, according to NPR.

South America has a strong history of nationalization, and these types of governments are most likely to be distrustful of outsiders and suspicious of international investment.

Colombian relations with other nations, particularly the United States, is different— dating back to the Cold War, the War on Drugs, and combating domestic and international terrorism.

It is important to pay attention to local politics and attitudes within each South American nation before investing. International oil companies are investing more money in exploring parts of South America, Africa, Asia, and Australia for oil; however, every nation and continent is different.

Many outside investors have had to contend with nationalization and an outright ban of their presence. Various African and South American governments are resentful of outside oil companies, fearing that foreign influences would harm local communities while breeding corruption.

While has been true in the history of some parts of South America and Africa, this is the perception that oil companies and outside investors will have to fight. In order for more investment to take place in places like South America, oil profits must benefit all layers of society, from businesses and politicians to workers and local communities.

With that being said, nationalization of oil fields is not the end of all foreign investment, since political moods tends to change with the wind.

What the Colombian Deal Means for the Energy Market

An article by UPI discussed the promising results from drilling in the Magdalena Basin. In the future, the Santa Isabel deal may flood the world market with a new channel of shale oil.

The Colombian exploration project is another ripple effect of the U.S. shale boom, which brought forth previously untapped oil. Companies like Canacol Energy and ConocoPhillips are looking for new shale developments that might provide similar success to that of the United States.

Oil companies and nations are also looking to move away from the Middle East as a major source of oil, something that will prove difficult as the world's oil supply as a whole continues to decrease. Exploration into new areas of the world is a way to stay on top of the energy market and to have an oil presence in diverse parts of the world.

The Colombian deal is certainly step in the right direction.