The Smart Money is Taking Notice 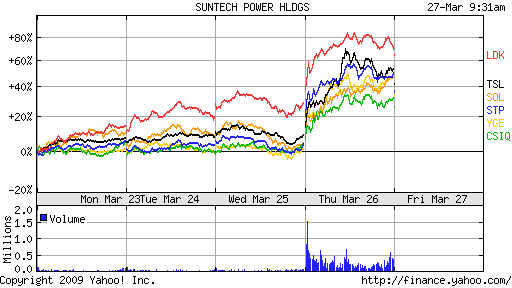 Wall Street got that warm fuzzy feeling from solar stocks once again, some surging 60% or more in a few days time.

But it's not the gains I'm interested in — reality will return soon enough — it's the eagerness with which the smart money flocks to cleantech that's important here.

You see, a 40-60% jump across an entire sector in just a few days equates to nothing more than a closet love affair. It means The Street is brimming with anticipation for a cleantech resurrection, exploiting and overbuying any positive piece of news.

It's much different from the atmosphere just a few weeks ago, when one piece of bad news could squash any number of positive reports.

In this case, all the fuss was about Chinese solar stocks on news of a Chinese stimulus with strong solar provisions.

The bounce was overdone by all measures, and the stocks are already starting to correct themselves.

But a 60% run won't be erased overnight. And while they might drop a bit, this could be the very bottom of the other side of the trough.

I'll take two steps forward and one step back over what we have been dealing with.

What Happened, What to Expect

Basically, the Chinese Ministry of Finance announced a stimulus that would have some sort of solar subsidy.

I can tell you that the solar portion of the recent U.S. stimulus will dwarf any measures taken by the Chinese. Yet the reaction of Chinese solar stocks to their stimulus dwarfed the response American solar stocks to our stimulus.

It's all about timing.  The market was ready to run when the Chinese news came out.  We were still in the recession death grip when the U.S. stimulus was passed.

The Chinese are offering a subsidy of about $3 per watt for solar installations over 50 kw. That would cover about 60% of the cost of an installation.

But the visibility is poor. . . there has been no indication of how much money will be available or to how many megawatts the program would apply.

There's also a time factor. The provisions being offered by the Chinese government to aid the solar industry would likely not have significant impact until 2010, based on ongoing economic conditions, contract negotiations, and the nascent state of the rooftop solar industry in China.

But the proposal is still a market driver in the long-term, especially since this is widely considered only China's first step to boost the use of solar. You've already seen how the stocks reacted.

1) It doesn't take much incremental demand to move the solar market, with 250 MW moving worldwide solar market by 5% in 2009. 2) Investors are optimistic w/ the long term outlook of solar and will cover short positions w/ the first onset of market strength.

Solar Stocks: How Long Will it Take?

Well, it depends on what you're waiting for.

Sustainable profit trends in the solar sector aren't likely to emerge for the next few quarters. When they do. . . it's off to the races.

In the meantime though, you can still make money on solar stocks, it just takes a bit more work and patience.

More work because you need to be familiar with all the major stocks in the sector, know what their fair value is, and be able to track their trading patterns in this still-hostile environment, pouncing when you know they're too low.

More patience because you have rallies like yesterday that send the stocks too high too fast, and you must wait to they sell off to avoid chasing them and having the rug pulled out. 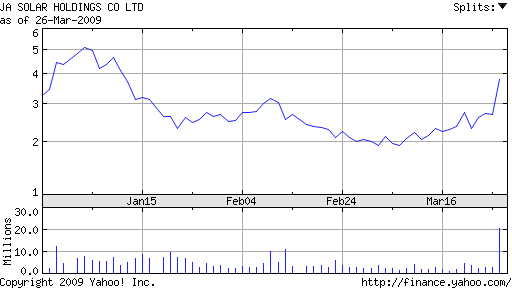 I know that fair value for that stock is about $4.00 based on current and future earnings.

But for the past few weeks the stock has traded well below $3.00 and has dipped below $2.00 at times. . . offering several obvious bargain hunting opportunities.

Smart investors like readers of the Alternative Energy Speculator capitalized. We played the stock twice for profit late last year and twice more this month for average gains over 24%.

And we're holding out for even higher gains with a long-term position.

So the answer to how long it will take to make money on solar stocks can only be answered in relation to how much money you want to make.

Get familiar with solar stocks.

World governments —as we've just seen— are busy coiling the spring for solar's success, and investors are clearly taking notice. You need to stake your position now, and at the right price, to be ready when it pays off.

PS. Alternative Energy Speculator members have been turning intricate knowledge of the cleantech space into profits all year. . . as most other markets continued to tank. We've closed 13 winning positions this year and 9 in March alone. And we continue to hold several other stocks for even higher long-term gains. Click here to get in on this cleantech profit action today.

2009 Solar Energy Overview
Energy & Capital editor Nick Hodge gives his solar energy overview... from raw material to finished product, and outlines the profit opportunities.
Solar Market Trends
Energy & Capital editor Nick Hodge discusses solar market trends in his never-ending hunt for profitable clean energy investments.
Solar Power Stocks
Green Chip Review editor Nick Hodge discusses solar power stocks and how, with the right preparation, you can play them for short- and long-term profits.
Solar Stocks
Green Chip editor Jeff Siegel discusses his favorite solar stocks for 2009 and explains how Washington is changing the game.
Hydrogen Fuel Cells: The Downfall of Tesla?
Lithium has been the front-runner in the battery technology market for years, but that is all coming to an end. Elon Musk is against them, but Jeff Bezos is investing heavily in them. Hydrogen Fuel Cells will turn the battery market upside down and we've discovered the tiny company that is going to make it happen.