Chinese Cleantech Companies: Made in the USA (by China)

Where China's Spending $12 Million -- An Hour

As you'd expect, the China panel was a focal point at last week's RETECH 2010 conference in Washington D.C. So I passed up the Renewable Energy Project Finance and Carbon Credits panels to be there.

I'm glad I did, because you'll be amazed at what the Chinese are doing in the energy sector... and at how much money early investors stand to make.

As we've clumsily tried to stimulate our way out of recession — spending billions mostly on pet projects — China has acted with concentrated focus.

Their goal: To dominate what will be the largest emerging industry this century — cleantech.

Our country's stimulus poured $66 billion into the sector. But a buckshot approach — funding everything from nuclear cleanup to federal building retrofits — failed to address the main issues facing the industry, namely securing capital and streamlining large projects.

And what funds were made available are still largely tied up with bureaucratic red tape.

In contrast, China has allocated $218 billion to be spent on cleantech in the next five years. And red tape there is mostly non-existent.

As Reuters recently put it:

Beijing's top leaders have made clear their intention to have their nation dominate this new industry, up and down the value ladder. And in their quest for the prize, they are not burdened by concerns facing their Western counterparts — such as the impact of wind turbines on landscapes, higher energy prices for consumers, or investor returns.

And yet, there are plenty of investor returns... because their plan is working.

That's what the Chinese are spending to beat us in the cleantech arms race. Victories are already being claimed.

The Global Wind Energy Council (GWEC) has reported that China "doubled its entire installed capacity each year since 2005." Last year, they became the largest wind market in the world, passing the U.S. and Europe.

China is now also producing nearly 50% of the world's solar cells annually, but that's likely to grow to 70%. And they're doing it more cheaply than their established German counterparts. (In fact, German companies have been finding it's cheaper to buy from the Chinese than it is to make their own.)

This is leading to a surge of Chinese-based cleantech companies — some of which you've never heard of — that are generating huge revenues and building massive wealth for their shareholders.

Take a look at how those companies are performing relative to U.S. cleantech giants like First Solar (NASDAQ: FSLR): 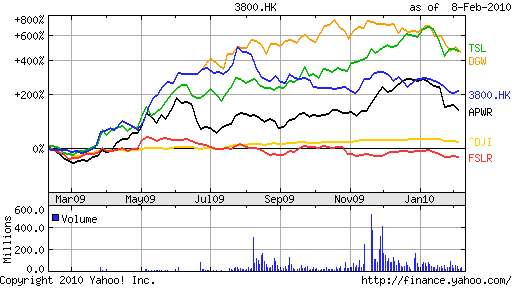 It's almost embarrassing... unless, of course, you've been investing in Chinese cleantech companies.

And this is only the beginning. The Chinese edge is becoming sharper every day.

Made in the USA (by China)

Perhaps you remember the stink made when it was learned a Chinese company was selected to provide turbines for a $1.5 billion U.S. stimulus-funded wind farm in Texas.

The company was Shenyang-based A-Power Generation Systems (NASDAQ: APWR). And they quickly squashed the opposition by announcing they'll build a manufacturing facility in the U.S. that will employ 1,000 workers while cranking out parts for wind turbines.

At the conference, executives from both GCL-Poly and China Guangdong Nuclear Wind Power said they'll soon be establishing a U.S. presence.

And, in the most revelatory example of all, the Wall Street Journal reported: "Duke Energy Corp. is in talks with State Grid Corp., China's biggest electricity distributor, over a joint venture that may involve cooperating on power transmission lines in the U.S."

While we were arguing about landscapes (I'm looking at you, Cape Wind), debating a national renewable energy standard (RES — still hasn't been passed), and decrying cap-and-trade, the Chinese went ahead and leapfrogged us.

During a session at the conference, Hunter Jiang, president of GCL-Poly, didn't mince words about his country's position. After ruminating on China's laggard position throughout modern history's industrial revolutions and commenting on how automobiles and computers were cradled elsewhere, he said, "Today we are the leader."

So tell your senator to invest in the USA, but tell your broker you want to buy China.

P.S. One tiny company is leveraging China's cleantech spending blitz to take the global battery and auto markets by storm. Its groundbreaking lithium-ion battery is already being used in cars and tools across Asia, and sales are expected to begin in Europe and Asia this year. Warren Buffett has already bought in — and turned a tidy profit — but it'll double several times over as the company becomes one of the largest advanced battery makers in the world.