China has a big problem.

Anyone who has been to Beijing, or watched the 2008 Olympic Games, knows that China suffers under a large, black cloud of soot and smog.

On August 27, 2008, China officially became the world's largest polluter. On that day, they churned more CO2 out of their coal-fired electric plants than the United States.

The Middle Kingdom suffers from a dearth of oil, but has abundant coal supply. For this reason, they use coal for just about everything. . . and given the 10% annual growth in GDP, its use is expanding rapidly.

A recent report from Canada says that China's greenhouse gas emissions have increased 120% this decade.

Now, I'm not writing to you about saving the environment. I believe that "climate change" is to the Democrats what "terrorism" is to the Republicans. To paraphrase H.L. Menkin, it's a bugbear used to frighten the public. It gives the politicians something to save us from.

So, it's no wonder that China has been fighting international environmental agreements for years. The country would not only rant about western imperialism, but argue correctly that while it contains twenty percent of the world's population, its greenhouse gas emissions per capita have remained less than other industrial countries'.

It seems only natural that the world's fastest growing, highest pollution-producing country would continue on its path of anti-environmentalism. . .

This is why I was so shocked to read that China recently:

. . . And all this ahead of the international meeting on the environment at Copenhagen in a month and a half.

According to the Wall Street Journal, "Asia's two biggest polluters from burning carbon-based fuels announced their collaboration on renewable power and energy-efficiency projects in a memo of understanding yesterday in New Delhi."

What the heck is going on?

One would like to think that China has had a bout of conscience, perhaps in response to a recent report that claimed birth defects in China's coal regions rose 40% between 2001 and 2006.

According to China Daily, "The number of newborns with birth defects is constantly increasing in both urban and rural areas. Environmentalists say that the leading culprit is China's dependence on coal and that birth defects are highest in coal-producing regions such as Shanxi province and Inner Mongolia."

I'd like to think that China is motivated by ethics, but I doubt it. Rule number one of investing is to follow the money. When a country like China suddenly switches its rhetoric to encompass environmentalism, there is a reason. . .

Green energy is where the money is. The richest man in China (worth $5.1 billion), plans to take over the world by selling electric cars to the masses, and the second richest person made her $4.9 billion fortune recycling paper.

In fact, China's green industry is now estimated to be worth $132 billion.

Wan Benti, chief engineer with the Ministry of Environmental Protection in China, claims "the total output value of 1,300 Chinese enterprises in the environmental protection industry will hit 900 billion yuan by the end of this year."

China is already the world's largest producer of solar panels, and is becoming a front runner in the battery and power storage sector. Note the surge in Hong Kong High Power Technologies: 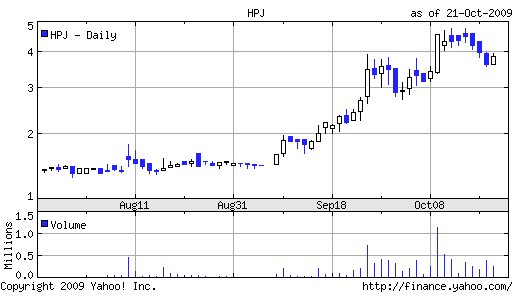 I suspect that China's newfound environmental crusade has less to do with CO2 emissions and more to do with profit.

If the rest of the world wants to hamstring its leading industries by throwing up more barriers — in terms of carbon restrictions, cap-and-trade, etc. — China is more than happy to sell electric cars and solar panels to consumers in the West.

And if GE sells fewer turbines and GM fewer cars, that's alright, too. . . just don't expect China to follow any agreement it signs.

In the end, it's just more of the same Chinese duplicity.

I do know one thing: all of these Chinese green energy companies can be expected to surge going into the Copenhagen meetings. I'll send you my best idea next week — it's a cutting-edge battery maker that could easily go up 1000%.

P.S. At this stage in the recession, I would dare any trader to match the success that my colleague, Ian Cooper, has been having lately. After all, how many people do you know trading with a 94.2% success rate? While most traders are running away as fast as they can, Ian simply rolls up his sleeves and gets to work. Recently, he's knocked out a 20% gain in two days — and another 58% trade in a little over a week. But hey, don't take my word for it. . . I want you to grab these profits for yourself. Just click here to learn more.