It's not hard to sense that the United States isn't the superpower she used to be.

From national and consumer debt to the stalled housing market, unemployment, energy dependence and a do-nothing-unless-it's-for-reelection Congress, these past few years have made clear that we'd better get our act together... or risk being knocked from our global throne.

But being knocked we are — especially in the ubiquitous energy industry that powers the globe.

There's no other way to say it: China is whooping our ass.

The jobs and investment we don't have...

Are all going to China.

In a study out by Ernst & Young this month, China was ranked the most attractive place to invest in renewable energy, dethroning the U.S.

According to Ethan Zindler, head of policy analysis at Bloomberg New Energy Finance: “Within the past 18 months, China has become the undisputed global leader in attracting new investment dollars.”

And it isn't just Chinese money; dollars are pouring in from U.S.-based funds and individual investors buying Chinese ADRs.

Chinese companies will make 43% of the solar panels; U.S. firms will make 9%.

Even Moody's — which was late to predict the world's 2008 woes — is early to warn about this trend, saying the “countries that make the most investments will create the most jobs,” while noting the cleantech economy is growing three times as fast as the overall economy.

Indeed, China has made cleantech a vital part of its national strategy.

The Middle Kingdom has a national law requiring a certain amount of its energy to be produced renewably by 2020. The U.S. has no such law.

It also has a system, known as a feed-in tariff, that requires utilities to pay a higher rate for clean energy. The U.S. has no such law. 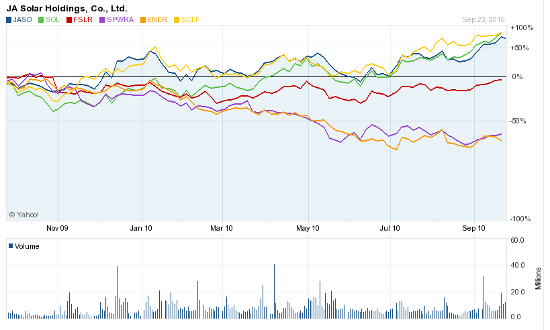 But the chart hints at so much more than that...

It shows the path two countries are taking to the future. And it's clear which one is winning.

P.S. As always, you can catch up on this week's news in the energy markets and beyond, below.

Crude Awakening: Peak Oil: We've Been Lying to You
Editor Ian Cooper exposes the biggest lie we've ever told readers, and shows you how to turn the tables for personal gain.

Must-See TV: This One is Money in the Bank
Nick Hodge uncovers the truth behind a nuclear power story that has been buried by the mainstream media.

Four Ways to Play the Global Water Crisis: Water is the Next Oil
Editor Nick Hodge details water woes in a few corners of the globe before offering several ways for investors to profit.

But Baby, I Can't Find No Job: Money Goes Where It's Wanted
Editor Christian DeHaemer explains why money goes where it's wanted... and where smart investors might consider putting theirs in upcoming months.

The First $1 Trillion Stock: Who will win the race to a $1 trillion market cap?
Analyst Adam Sharp speculates about which stock will be the first to reach a market value of one trillion dollars ($1t). Contenders: GOOG, MSFT, AAPL, XOM, PTR.

Oil Price Fantasy - the True Cost of Crude: Persian Gulf Oil Costs $543.00 a Barrel
Editor Steve Christ looks at the true cost of oil and explains why the cost at the pump is nothing more than a fantasy.

New Vaccine Technology: Why “Flu Season” May Soon be a Thing of the Past
Thanks to an astonishing breakthrough in vaccine technology — which strengthens the immune system by 1,000% — you could wave goodbye to flu season for good. Wealth Daily reports on the little-known biotech bringing about a medical revolution.

Yukon Gold Stocks - Retaming the Wild: Geologists May Have Discovered the Source to the Yukon's 200 Million Ounces of Gold
Editor Greg McCoach takes an in-depth look at Yukon gold stocks, beginning with the famous Klondike Gold Rush of the late 19th century.

Mongolia, The Saudi Arabia of Central Asia: Meeting the Mongolian Prime Minister in NYC
Editor Christian DeHaemer meets with the Prime Minister of Mongolia and the two largest investors in the country, among others. The details of this meeting reiterate what he's been saying for a year now...