Now is the Time to Invest in Canadian Oil Sands

Yesterday I woke up and did the same thing I do every morning: check my BlackBerry.

I immediately opened two messages from my friend Stelios. His messages made me shudder.

And I fully expected to see Dow futures imploding. (More on that in a minute.)

Stelios is a Canadian-born Greek I first met back in 2006. I always listen to what he has to say. He’s a super-savvy investor, trader and entrepreneur.

He’s currently in China where he’s a partner in a shipyard that builds yachts. In fact, he designs the yachts himself.

As far as I know, he has no formal education or training in nautical engineering or boat design. Yet last month his yacht took top honors in design.

He is, in short, a renaissance man.

Here’s what he sent me:

Finally, some mainstream press waking up to China whacko world — with some decent data, too...

More insights from the front line: They pulled my shop's credit line today for no reason... and given us 5 days to pay. Funny thing is, our revenue has tripled and our assets cover loan value by 500%.

When China announced a nearly $600 billion package to ward off the 2008 global financial crisis, city planners across the country happily embarked on a frenzy of infrastructure projects, some of them of arguable need.

Dude. A 90% drop in Shenzhen home sales is not a data anomaly.

Other fun facts: Went for a walk around my block to a new sister community. It’s about 1 sq. mi. I thought it was cool counting 27 cranes up — until I saw a poster that the complex is going to have the biggest 3D cinema in all of Asia.

The zone where I live doesn’t have 30k population; my town isn’t even 1mil total, many of which are still dragging chickens behind their bikes.

Yet the Dow soared over 300 points yesterday — and comfortably closed above its 50-day moving average. In fact, the Dow has moved up more than 1,000 points (+11%) since last Tuesday.

Have we seen the bottom in the market? I have no idea.

What should you buy?

You see, on the same day Stelios was sounding the alarm about China's economy, Chinese oil giant Sinopec announced it was acquiring Daylight Energy, a Canadian oil and gas company.

And check this out: The Chinese are paying a 70% premium to the current per share price to acquire Daylight.

The China Investment Corporation, a $300 billion sovereign wealth fund, opened its first overseas office in Canada early this year and chose Canada for its only energy sector equity investment. 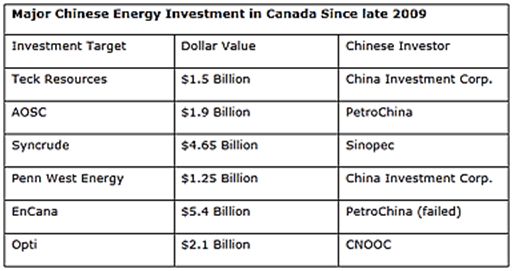 Canada is, without a doubt, the next energy powerhouse. And it’s a long-term trend.

The Chinese know what I saw with my own eyes two weeks ago when I took a helicopter tour of the booming Canadian oil sands at Fort McMurray.

We flew over the operations of Suncor, Syncrude, Husky, and Imperial.

The amount of wealth being generated in this resource-rich town is mind-boggling. I saw it for myself.

All of this is occurring at a time when Canadian oil sands stocks are hitting 52-week lows.

Last week, Suncor sank to $22.55 a share. It was its lowest price since the financial crisis of March 2009. At last week’s level, Suncor was trading at a trailing P/E multiple of 9.5... and a forward P/E multiple of roughly 6.

That was a no-brainer investment, a gift.

It’s time to buy. The Chinese are.