Check out These Blank-Check Companies

Last week I told you about the dangers of owning special purpose acquisition companies, or SPACs.

They are basically a way for Wall Street insiders to avoid the rules and regulations of initial public offering (IPOs) and enhance their profits.

That said, SPACs are market darlings. Just yesterday, Tishman Speyer’s SPAC, an entity named TS Innovation Acquisitions, jumped 100% after it announced it would merge with Latch, a smart lock market, and take the company public.

CNBC reports, "Fifty-six SPAC initial public offerings have already been completed in 2021, raising $16 billion, Goldman [Sachs] notes. It said this adds to the 229 U.S. SPACs that raised $76 billion in 2020, which was dubbed the 'year of the SPAC.'" 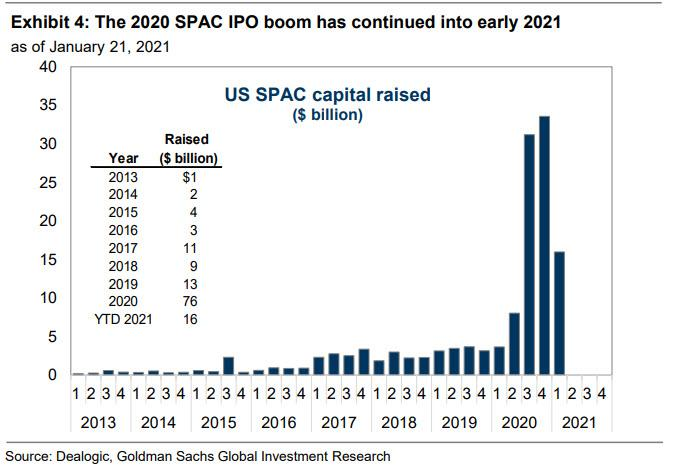 There is a lot of money to be made chasing momentum stocks and investments in the late stages of bull markets, but it’s not for widows and orphans, as they say.

If you follow the market momentum to its inevitable conclusion, you are chasing new, young investors who both kept their jobs (working from home) and make less than $75,000 a year — thus they will get $1,400 from Uncle Joe Biden.

Which is why companies like GameStop (NYSE: GME) are flying.

With that in mind, here are three SPACs you should buy today...

IPOD is a Chamath Palihapitiya SPAC and is currently trading under $17 a share.

Palihapitiya won three World Series of Poker events before becoming a venture capitalist. His other SPAC, IPOB, merged with Opendoor and saw its share price jump from $10 to $25.

IPOD aims to buy a tech company in the near future. Plus, it has “social capital” in the name, which is a big plus with today's youth.

This is the biggest SPAC in history. Pershing Square Tontine Holdings raised $4 billion from its IPO last July. The company now trades with a market cap of $5.71 billion. It hasn’t found a company to buy yet but it is run by the well-known Bill Ackman, who has a large following and a strong track record. This company is chasing a large tech unicorn, and there is a good chance it will get one.

SVAC is a blank-check company sponsored by Starboard Value LP, Jeffrey Smith's hedge fund. Fortune called Jeffrey Smith “the most feared man in corporate America.” The SPAC is currently trading at $11.20 and has a market cap of $570 million. The company is looking for undervalued acquisitions in the technology, health care, consumer, industrials, and hospitality and entertainment sectors. Value stocks have been beating tech stocks for the past three months, and the end of COVID-19 should push them much higher. If you are looking for a sector rotation with plenty of upside, this might be a way to play it.