We were supposed to meet at the Canaccord Genuity office on Madison Avenue.

But when I got there, I was told to head straight to the Four Seasons, where the president would be waiting for me in a suite on the 11th floor.

When I arrived, I was met by a young Canadian attaché. She had all the proper credentials to get me straight to the front door, where I was soon greeted by a rather relaxed and friendly man who likely has world leaders on speed dial on the phone he carries in his pocket.

I’m not going to lie: There was something a bit intimidating about this.

After all, who am I to be sitting with this guy?

Some random financial writer and analyst from Baltimore with a pedigree spawned from ancestors of farmers, grave diggers, and steel workers.

I never went to an Ivy League school.

I wasn’t gifted a million-dollar trust fund on my 18th birthday, and I sure as hell wasn’t born into money.

So how did I end up sitting across the table from one of the most powerful men in the world?

As a longtime advocate of legalization and investor in the cannabis market, I’ve been fortunate to have built a solid reputation in the industry.

When it comes to the cannabis market, folks know who I am, and they know my research is sound. They also know that this is personal for me.

Coming from Baltimore, I’ve seen what the war on drugs has done to my community. And I have plenty of friends in the military who have gone off to the Middle East and returned home with traumatic brain injuries and PTSD, only to be denied access to cannabis as a treatment.

My personal relationship with this plant and this industry has not only been a key instigator for me in terms of supporting, investing in, and profiting from this market, but it’s also given me credibility as someone who isn’t just some Johnny-come-lately. And this reputation has helped put me in the same room as some of the biggest players in the world.

My recent meeting with former president Vicente Fox is proof of this.

But I’m not here today to brag or talk about how well connected I am.

Instead, I’m here to share with you something that, as an investor, you need to know.

Mexico Is Going to Legalize Cannabis in Less Than a Year

After we exchanged a few pleasantries, I asked President Fox how soon we should expect to see full-scale legalization take hold in Mexico.

His response surprised me. 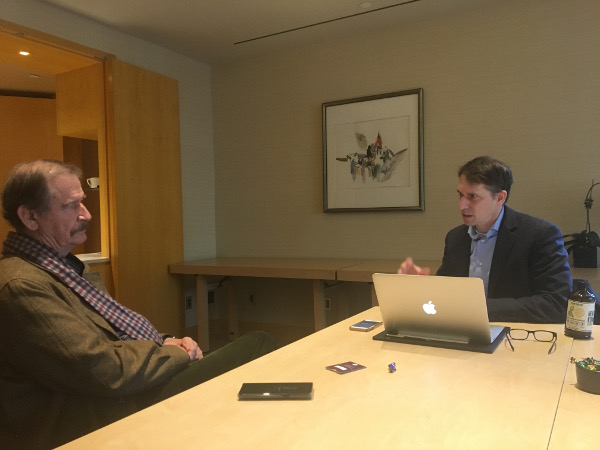 Given the snail’s pace at which government tends to move, I wasn’t expecting to see any tangible action on this for at least another year or two. But, without hesitation, Fox said he expects this to happen in about six to seven months based on the fact that there are already enough votes within the Federation to make it happen.

So if he’s right, and I believe he is, the question is, how can you get a piece of this action?

Members of my Green Chip Stocks community already know. In fact, they already own a piece of what is arguably the best stock to own in anticipation of legalization in Mexico.

I’ll be happy to share the name of this company with you, too.

Just become a member of my Green Chip Stocks community now, and once you sign up, you’ll have full access to my portfolio, which includes my top pick for the Mexican cannabis market.

Of course, the rapid growth of the cannabis market goes far beyond Mexico.

In fact, using a special algorithm I developed that helps me identify the best-in-breed cannabis stocks throughout the world, I’ve been able to identify which states and countries are next to legalize and, more importantly, which stocks are in line to get the biggest boost from these new legalization efforts.

I’m not going to lie. I’ve done this successfully so many times that it’s actually become quite easy.

And if you don’t believe me, just check out this recent investor note I published that details where we’ll be investing next.

Whatever you think about cannabis, make no mistake: This continues to be one of the greatest investment opportunities of the 21st century. So unless you hate money, you need to get some exposure to this space right now.