California Drivers Paying Over $5 for Gasoline

The price of gasoline is soaring in California. In some places drivers report paying over $5 a gallon in what has become a record gap between the Golden State’s gas prices and the national average.

According to AAA, the average price for a gallon of gas in California is $4.183 right now — 63% higher than the national average. And it comes at a time when gas prices are traditionally lower.

The blame for soaring fuel costs has been spread around quite a bit. Of course, President Trump has received a lot of the blame from many Californians. The San Diego Union-Tribune asked its readers, “Who is to blame for California gasoline prices being out of line?” One reader replied:

The jump in oil and gas prices may be partially due to the manipulation by California refineries having questionable “maintenance problems,” but the national and international price jump is directly traceable to Donald Trump’s policy.

And, of course, President Trump blamed the state for its own high gas prices. 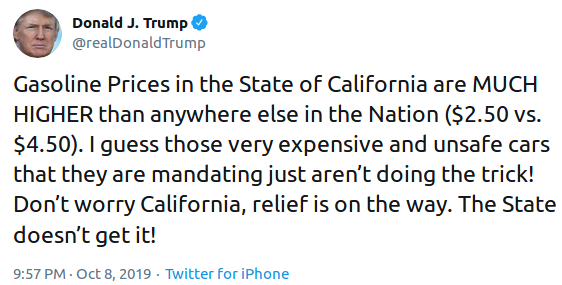 Others blamed Middle East tensions and trade battles, while still others put the blame on California’s high fuel taxes.

California has the highest taxes on gasoline in the nation. Drivers pay over $0.80 per gallon in combined state and federal taxes — about 32% higher than the national average. 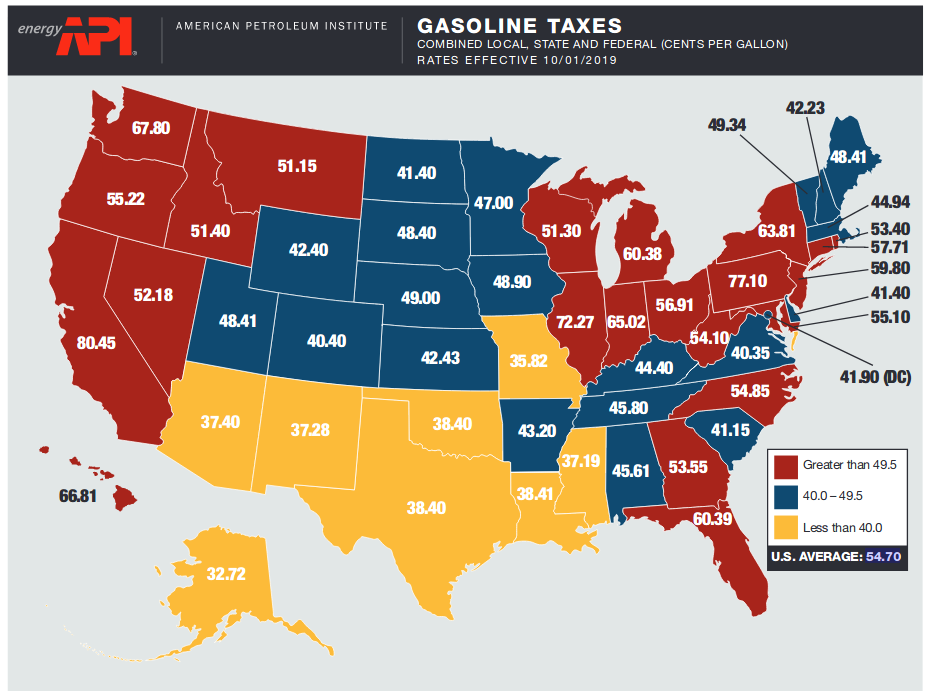 But states like Pennsylvania and Illinois also have very high fuel taxes, and gasoline prices aren’t soaring there. Gas prices in both states are higher than the national average, but just barely.

Even if California drivers were paying the national tax average of $0.547 per gallon, they’d still be paying $3.9255 on average — which is still significantly higher than the national average right now.

So while taxes contribute, they aren't wholly to blame for the record gap between California's gas prices and the national average.

This is about 900,000 bbl lower than this same time last year. But that's probably not enough to account for such a local spike in prices. So supplies probably aren't playing a major role in high gas prices. 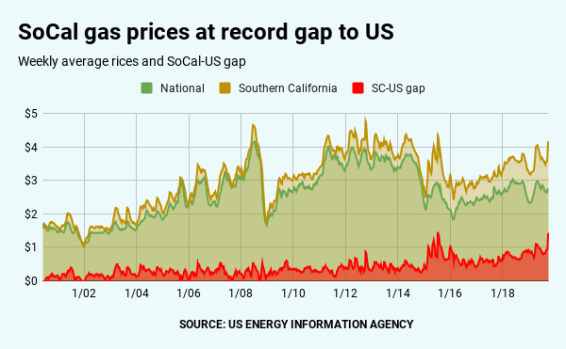 See, what's a bit odd about the recent jump in California is that it's mostly localized to California. Gasoline prices have increased in surrounding states, but they are nothing compared to those in California.

In bordering states Nevada and Oregon, AAA reports the average price of gasoline is $3.448 and $3.209 per gallon, respectively. In Arizona, gas is even cheaper — under $3 a gallon on average.

Another explanation for the recent jump in gas prices is a long series of refinery outages. Several oil refineries in California have experienced many unplanned and planned maintenance outages throughout the year.

But refinery outages still don't exactly explain why gasoline is so much higher in California than in surrounding states.

According to the EIA, there are 15 oil refineries operating in California, five in Washington, and one in Nevada. That's it for the entire West Coast oil district (excluding Alaska and Hawaii). There are no oil refineries in Oregon or Arizona.

So you'd think refinery outages would affect those states without gasoline refineries just as much, if not more, considering transportation costs. But that's not what's happening.

Again, it's true that Californians are paying a lot in fuel taxes relative to neighboring states, especially Arizona. But the difference between average fuel prices and taxes is not equal between the states. The easiest way to see this is to compare gasoline prices minus all taxes.

As you can see, even without taxes, gasoline is still much pricier than in surrounding states.

Now, of course, we have to consider that California is just an expensive state in general — particularly cities like LA and San Francisco. Everything is going to cost a little more in those cities.

But again, what we're seeing here is a record gap between California gas prices and the rest of the country. So either California has gotten more elite and can justify a higher living standard (that's probably not the case), or something else is going on.

My best guess is California's gas spike is the result of a broad combination of things. Although I doubt Donald Trump has much, if anything, to do with it.

In addition to the higher tax rate, refinery outages, and the state's costlier standard of living, adding to the record gap could be a bit of fear.

At the end of the day, it's really difficult to pin down one exact thing responsible for the recent jump in prices in California. Refinery outages seem to be the most impactful factor. But there are a lot of elements at play here.

Most likely the jump in California gas prices and the relatively wide gap between them and the national average is only temporary. But this is a story we will keep you updated with here in Energy and Capital.