Buying the Vaccine Rally Is Risky

Why are stocks hitting record highs?

I wish I had a good answer for you. I wish I could tell you the Dow rallied to 30,000 last week because everything was going so great for America.

I wish I could say the economy never looked stronger... that the number of COVID-19 cases and deaths weren't still rising... that the nation's cities weren't devolving into “anarchist jurisdictions”... that it wasn't less than two months ago people were talking about civil war breaking out!

And I think that's accurate. I believe investors are in fact responding bullishly to the news. But they shouldn't be.

A vaccine is good news for sure. But here's the thing: The damage caused by COVID is already done.

First, even if there was a vaccine ready right now and it was completely free and accessible to everyone on the planet, the world would still be left with 1.4 million deaths. A vaccine doesn't bring those 1.4 million people back. Nor does a vaccine erase the damage caused by the government's response to COVID.

A research paper published in October by David Cutler, professor of Applied Economics at Harvard University, and Lawrence Summers, prominent American economist whose professional accolades are too long to list, called the COVID pandemic “the greatest threat to prosperity and well-being the U.S. has encountered since the Great Depression.”

They estimate America's cumulative financial costs of the pandemic to exceed $16 trillion. The paper states:

The total cost is estimated at more than $16 trillion, or approximately 90% of the annual gross domestic product of the U.S. For a family of four, the estimated loss would be nearly $200,000. Approximately half of this amount is the lost income from the COVID-19-induced recession; the remainder is the economic effects of shorter and less healthy life.

A vaccine changes none of that. It only helps prevent more loss.

Yet the market seems to be pricing all this vaccine news as if it's a net positive. The Dow is higher today than it was just before the COVID pandemic began.

For some crazy unknown reason, the fingers on your hand start falling off one by one.

At first, no one knows why this is happening and the doctors don't know what to do. But they figure out whatever the problem is and are able to stop it after your fifth finger falls off.

It's wonderful that doctors were able to stop your remaining fingers from falling off. But you're still down five fingers.

The treatment to stop your fingers from falling off was great. But it doesn't result in an overall net gain.

So why are stocks at record highs?

But the truth is stocks are high because of the government's multitrillion-dollar helicopter-money stimulus. The government ordered the Fed to print up trillions of dollars in new money, which it then threw into the market like Mardi Gras beads. It was free money intended to alleviate losses due to the shutdowns. But that's not exactly how the money was used.

Truth is, a lot of that money went right into the stock market. Both companies and private investors used a lot of the free money they got from the government to invest. This essentially propped up equities throughout the entire pandemic. 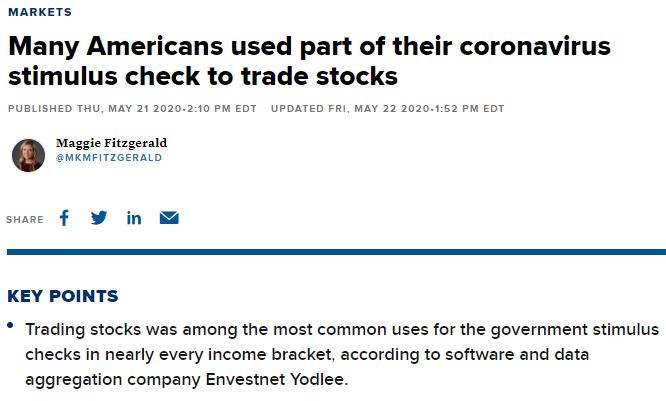 The stimulus package in April included curbs on companies buying back their own shares. But it did nothing to restrict them from investing in other companies.

Despite the number of “surging” coronavirus cases you've heard about over the past several months, the Dow Jones has gained over 60% since mid-March.

And now new investment money spurred by vaccine news is piling on top and pushing stocks to record highs.

So where's this vaccine rally headed?

Probably toward a correction.

There are no good fundamental reasons the stock market should be as high as it is right now. I'd expect at least somewhat of a pullback over the next few weeks.