Gold has been a great investment for the last five years. It has gone from $1,320 an ounce to $1,779 an ounce with just a few hiccups.

I’ve yet to hear a taxi driver or waitress tell me to buy gold. The strip mall stores are closed, there are no “buy gold” commercials on TV, and it never leads in the news.

It’s much easier to envision gold going up versus down as the global currency warlords are fighting each other for the right to surrender...

It’s easy to imagine a scenario where a Greece or Argentina-style default in a G20 country would spark a speculative frenzy and a blow-off high around $10,000 an ounce.

In fact, this is easy to picture. What’s more difficult to figure out is how gold prices will drop back below $1,300 when Chairman Powell of the mighty Federal Reserve is printing money like a Zimbabwean dictator.

I like gold and gold stocks. I’ll continue to own them and recommend you buy on the dips.

That said, today we are talking about silver.

My dear, sweet grandmother was born in 1898 and died in 2000, thus acquiring the unique honor of living in three centuries.

She was born before the Fed was created in 1913 and raised a young family during the Great Depression. Mildred was an avid bridge player and hoarded her winnings in the credenza. She had multiple drawers full of pre-1963 silver half dollars, quarters, and other loose change.

I remember in the late 1970s, the old biddy would call up silver buyers and have them appraised...

They would come scurrying over to her apartment, hoping for a quick score from a little retired lady. But she never sold, she just liked talking to people sometimes and giving them tea and cookies.

I don't know what happened to all those silver coins, but I do know a mint condition 1963 half dollar is worth $40 and a normal one is worth $12.

Historically, silver is as cheap as it has been compared to gold.

Take a look at the gold/silver ratio: 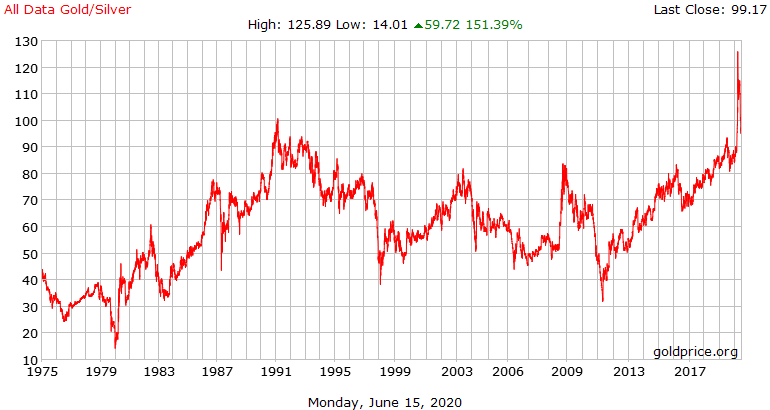 For silver to revisit its high point versus the price of gold, silver would need to almost triple in price while gold remained the same.

But, both silver and gold will go up because the world is printing money like toilet paper.

Silver mining stocks will be the best performers. But it just won’t be precious metals... All those extra dollars, yen, and euros must go somewhere. We will have an amazing bubble in select asset classes.

I’ve developed a short-term trading system to benefit from the bubble explosion in stocks. Look for it starting next Monday.