There is a common belief out there that if you work hard and save your pennies, you can live an honorable middle-class life.

You put your money in safe assets that are protected from vicissitudes of the markets and the dirty fingers of criminals. Sure, you can win or lose, but the playing field is the same for everyone. You roll the dice and take your chances.

Of course, this isn't in any way true. The market is a ravenous beast that wants to chew up your money and leave you penniless and alone.

"In addition to valuable monetary consideration to be paid into a settlement fund, the term sheet also provides for other valuable consideration such as provisions requiring Deutsche Bank’s cooperation in pursuing claims against the remaining defendants."

The traders alleged the banks abused their positions of controlling daily silver and gold fixes to reap illegitimate profits from trading and hurting other investors in those markets who use the benchmark in billions of dollars of transactions, according to versions of the complaints filed in 2015. Of those banks, only Deutsche Bank has reached a settlement.

All of those crazy gold bugs were right all along! It was manipulated. And nobody cared. A giant shrug emanated from living rooms everywhere. Much like voters expect politicians like Hillary to be corrupt, they expect banks and brokers to cheat.

That said, you will note that as soon as the settlement was reached, the silver market took off...

Once silver was able to trade in a free market, people bought it. 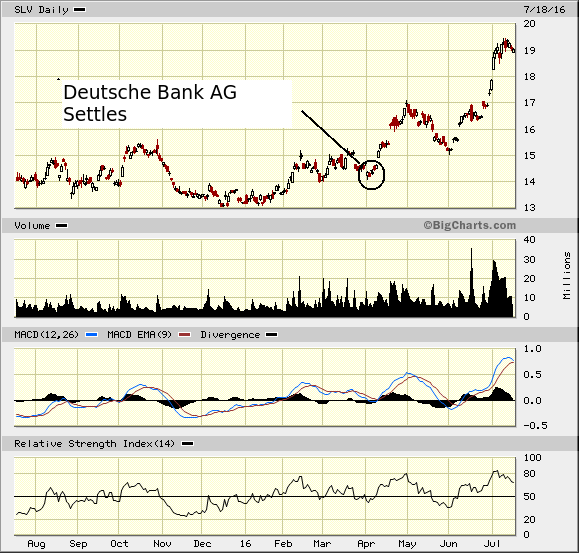 It is maddening to all of us who trade silver to know that manipulation was commonplace and yet we could do nothing about it. This slap on the wrist won't stop DB or other large banks from cheating the markets — they will simply move to sugar or carbon credits or reverse long-term default swaps.

Where there is big money at stake, there will always be people inventing ways to get it.

But for the moment, the gold and silver markets are free. As you can see in the chart above, the price of silver has taken off nicely. Silver mining companies are up 300–400%.

Readers of Crisis and Opportunity were able to buy Silver Standard Resources Inc. on the breakout and are now sitting on a 173% gain.

And judging by the 50-year inflation-adjusted chart you see below, we are a long way from the 1,980 top. 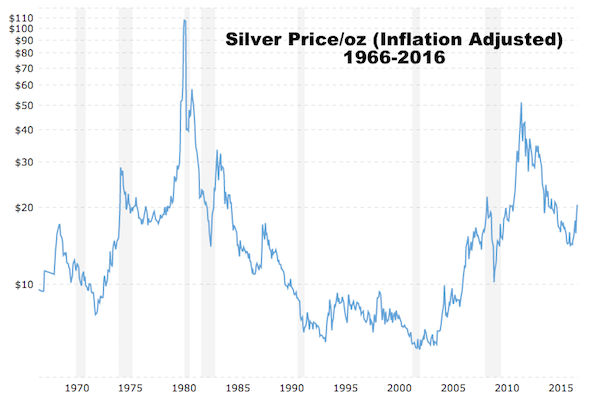 This time it could go even higher. Let's face it. Times are bad.

You have an Islamic terrorist movement that is killing thousands of people. The death toll is rising so fast that another event happens before the last one is out of the news cycle. Our failed leadership can't even name the problem, much less do anything about it.

The police are being assassinated on the streets and have effectively gone on strike. Race riots are inevitable this summer.

The economy muddles along with marginal growth and part-time jobs. Wages are stagnant. For the first time since record keeping began, more businesses are closing than opening in this country. All savings from low gasoline prices have gone to forced Obamacare increases.

History tells us that once a country gets above 90% of debt-to-GDP, bad things happen. And bad things are happening. Corporate high-yield default rates are at a high not seen since 2009 — mostly from overleveraged energy companies.

Rents have gone up three times faster in the last 10 years than the previous 50.

Canada, our second-biggest trading partner, is on the brink of a massive housing market correction. China, our third-largest trading partner, is the world's largest Ponzi scheme, with $25 trillion in debt spent on malinvestments such as empty apartment buildings and steel mills no one needs. Last year, real estate prices in Shenzhen rose 46.7%, and Shanghai was up 27.7%. These gains are unsustainable and signal a debt-induced blow-off top. Reuters is reporting that in 15 of the smaller cities, prices fell year-over-year.

It is not hard to envision a world where silver and gold get bid much higher. We are in the second-longest bull market of all time. It is built on easy money. The Federal Reserve, through its actions, has admitted that it can't do anything about the next crisis. With interest rates at zero, there is no room to go lower. Attempts to raise interest rates, so it can lower them in the next crisis, have proved futile. Negative interest rates have been tried by Germany and Japan and have failed.

The next crisis will be a big one, and it will last a long time. Cash will be king. Buy silver and gold on the dips.