The world is a mess.

Obama's “weeks not months” war in Libya has entered its fourth month. OPEC told the Saudis to go pound sand when they asked for an oil production increase.

The spread between what the U.S. pays for oil and what Europe pays for oil has flipped over and is pushing record highs.

The dollar has bounced on Greek news, but only for a bit.

U.S. crude stockpiles are down. Demand already outstrips supply, and the IEA says a tidal wave of emerging market refineries is coming online and will demand to be fed...

Brussels and Washington are dealing with their debt by defaulting. Both economies have engineered a controlled currency fall in an effort to destroy the value of their debt. When one currency falls too far, the focus shifts to the other.

This week, euros are flying to the “safety” of the dollar as it becomes clear Greece must default. If you look at Greek P&Ls, revenues are decreasing while costs are increasing. The deficit will grow ever larger, bailout or no.

If you can't make you car payment, putting it on your Discover card will only create another payment you can't meet... And Greece can't get a second job. They are stuck; the German banks will have to eat their loans.

This has temporarily pushed up the dollar, which in turn pushed oil down below $95 on the Texas crude variety.

In a few weeks, some other circumstances such as the debate over the debt ceiling will push the dollar down again. All the while, the currencies will tumble like a dead cat bouncing down stairs...

Against this background, we look for clarity in the numbers. 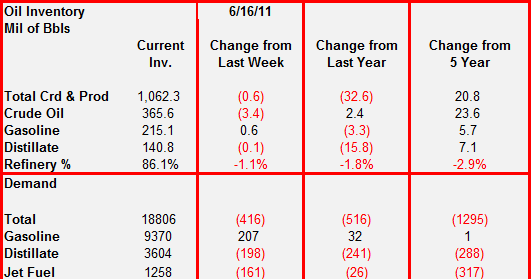 Only time will tell if this is just a weekly blip or the start of a new trend.

(As an aside, I have a hankering to see Cushing. Drop me an e-mail if you can arrange a tour of the famed oil juncture.)

In other news this week, representatives from OPEC got together (think of Qaddafi's poor minions drinking tea with those who set the NATO dog on him). The Saudis pushed for more production to lower oil prices, but the OPEC's ministers refused to endorse a group-wide increase in output last week. 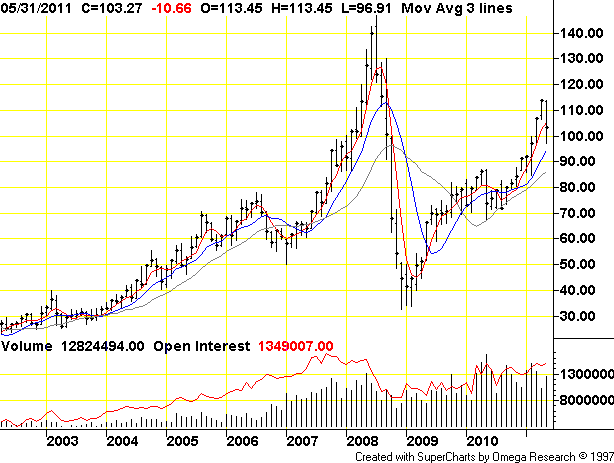 This leaves the Saudis and their fiction of spare capacity to take the edge off of oil prices and perhaps save the world from a second slump.

The Saudis know high oil prices will cause a global slowdown, just as they did in 2008.

And given the cyclical nature of commodities, a global slowdown will create less demand, and thus lower oil prices. See: 2009.

The last thing the Kingdom wants right now as the Arabian spring turns to summer is less money by which to placate the lesser sheiks and peasants...

The International Energy Agency (Europe's EIA) put out a report this week saying weakening first world economies will be offset by increasing in crude demand from places like China and India. The report guessed this would balance out; it should hold demand level for the next year.

The continuing high price of crude oil risks creating a hard landing for the world economy. If the current oil price continues it will be to the detriment of the global economic recovery.

That doesn't mean demand won't pick up; over 90% of global demand growth over the next five years will come from emerging markets.

There is a tidal wave of new refining capacity in emerging markets that will continue to pose a threat to the aging refineries in developed markets.

Despite the fact the U.S. hasn't built a new refinery in 35 years, the overhang of global refining capacity is expected to reach 4 million barrels a day by 2016. Emerging market companies are putting money where their mouth is.

Gurdeep Singh over at MarketWatch says:

Indian refiners Bharat Petroleum Corp. Ltd (500547.BY) plans to raise its refinery capacity by nearly a third over the next four years to meet rising domestic consumption in one of the world's fastest growing large economies, its chairman said Sunday.

Its plans are contrary to those of several western oil majors who are shedding refining capacity either by selling them out or shutting them down. BPCL, like other Indian refiners, is betting that sustained growth in domestic demand will make additional capacity viable despite the country having an excess refinery output.

In other words: Right now — today — the world consumes more oil than it supplies.

Where will this additional 9.48 mb/d come from?

Two places: One of them is Mongolia. The other is Kenya.