In lieu of the standard format, today I'm bringing you aphorisms and snippets from the past two days at the Renewable Energy Finance Forum – Wall Street, which I had the pleasure of attending for the fifth time.

This is a no-bull meeting of financiers, tax attorneys, equity players, and energy companies — all in the same room — talking about how to profitably grow the industry. 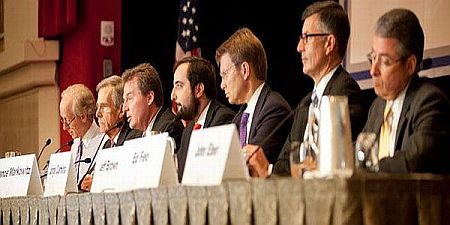 Compare today's renewable energy industry to the auto industry in 1903.

At that time, there were 500 or more car companies in the United States. Many of them went bankrupt.

Some people thought the horseless carriage would never replace the horse. We all know how that turned out...

The Fords of renewable energy are being established today.

From: Katherine Hammack, Assistant Secretary of the Army for Installations, Energy & Environment

The U.S. military accounts for 80% of the government's energy use.

A fair number of casualties in Afghanistan and Iraq come from guarding and transporting fuel.

The Army has a plan to generate net zero energy, water, and waste. It's saved 58 million gallons of fuel annually in Afghanistan by installing microgrids (computer-controlled generation and distribution).

No one cares about polar bears on the battle field. This is about lives and money. The rest of the country, politicians, and the market are starting to realize this.

The utility now has 3,300 MW of wind under its control. It says not a single turbine was installed because of government incentives — but because it was simply the low-cost alternative.

It was simply the lowest-cost alternative.

In the modern energy economy of highly-volatile commodity prices, it's getting tougher for utilities to negotiate long-term power purchase contracts...

Utilities don't want to sign 30-year contracts when the price changes that much in just a few years.

Wind, on the other hand, is free.

All the costs are upfront: land procurement, equipment, construction, etc. So it's easy to divide that out over 30 years.

In many markets, renewables provide the lowest levelized cost of energy.

MidAmerican (a Berkshire subsidiary (NYSE: BRK-A)), NRG Energy (NYSE: NRG), and NextEra Energy (NYSE: NEE) are some of the largest dividend-paying utilities in the country.

They're also the largest owners of renewable energy assets.

Like the Army, it's about the bottom line for them, too.

There was obviously talk of cheap natural gas at the conference — and how decade-low prices make it harder for renewables to compete.

No matter where you go in the energy world, you can't escape the far-reaching effects the fracking revolution has had on the entire industry.

But the consensus — even from the natural gas industry, which was well-represented — was that natural gas simply can't stay this low for a litany of reasons.

The fact that we had no winter is another.

Burning more natural gas for what is already shaping up to be a hot summer will also drive prices higher, as we're now using more of it to generate electricity.

Most estimates from forum speakers put gas in a $4-$6 range for the next few years.

But check this out: The cost of renewables is falling precipitously...

When Carter prematurely installed solar panels on the White House roof, it cost over $70/watt. Today it's $0.94/watt (see this from last month for more), and it's going to get much cheaper (I have a new report coming out on that soon).

As Richard Smead of Navigant Consulting (NYSE: NCI) noted: “Not calling a 100% rise in natural gas 'major volatility' means you have to talk fast.”

At the end of the day, I think everyone was in agreement that renewables are here to stay — and that they're getting cheaper and cheaper every day.

In addition to the car industry of 1900 analogy, one that kept being repeated was that of a 100-year transition that began in the early 1970s.

If you look at it this way, we're 40 years into it. And nearly halfway into this transition, we're seeing pushback from the incumbents.

It's easy to forget the energy market is an extremely long-term market.

But at the end of the day — and with a rapidly rising global population — there will be plenty of room and money for both sides...

Natural gas backup is the perfect complement to solar and wind. And using more natural gas for transportation makes perfect sense as well. That could free up oil for the millions of non-energy uses we have for it — from medicine to plastics.

Expect much more info from the conference over the next few days. These notes only covered the first three of 10 hour-and-a-half-long sessions.

I think the sector will outperform most others over the next several decades.

But you knew that.