One of the most underreported problems with the new American oil boom has been transportation.

As U.S. oil and gas production nears numbers not seen since Reagan was president, transportation infrastructure such as railroads, pipelines, storage tanks, and gathering systems have lagged behind.

So far, the best way to transport oil from the Bakken, for example, has been via train, since it's cheaper than tanker trucks and can carry more oil in one trip.

But the problem with transport by train is competition. Plenty of businesses use trains to transport goods, and with all of the new oil being shipped, many are losing money over delays.

One of the companies struggling with traffic is Warren Buffett's BNSF railroad.

Last week, the company announced it would spend a record sum in 2015 to quell its congestion troubles.

Essentially, the Berkshire Hathaway-owned company has had problems helping all of its customers in northern markets, where pipelines are still very few in number.

As I mentioned a few months ago, the BNSF has come under fire for favoritism among its customers.

The company claimed cold winter weather caused a slowdown in shipments of grain from North Dakota, an all-important part of the state's economy.

This was met with skepticism when it was leaked that the company had no problem shipping several massive trains brimming with Bakken crude through Chicago, Seattle, and other domestic hubs every week.

As demand for grain and oil shipments are complicated by record corn and soy harvests, BNSF, under tremendous pressure, announced it would spend a record $6 billion next year to combat traffic problems.

The company also said $1.5 billion of it will go to the northern region (a.k.a. North Dakota), where the delays have been the worst and from where the company ships 1 million barrels per day in oil all over the country.

For fear of sounding too harsh on the Berkshire-owned railway, I'll add that Union Pacific has had to up its capital budget as well to hedge against lost business from thicker railroad traffic.

To tell you the truth, a lot of this increased traffic and BNSF and Union Pacific's aggressive spending isn't a surprise. Rather, it's a confirmation of something we've known for quite a while...

Part of the solution to traffic problems for rail companies has been to make single shipments much larger so they can transport more goods in one go and free up more time for other products.

The only expense for this has been in adding extra cars to trains.

This practice looks good for the bottom line until you factor in the fact that these super-massive oil transports have become rolling, thundering bombs that could derail and explode at any moment. 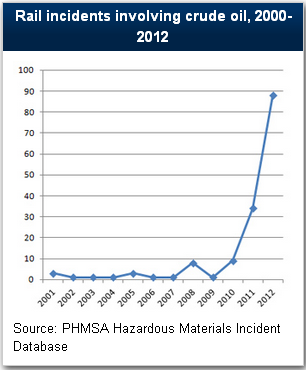 There's been a drastic increase in rail accidents involving crude oil over the last few years, and it's because companies have been overloading shipments and increasing rail speeds to meet demand.

The worst of these came in July 2013, when a runaway train derailed and exploded in the Quebec town of Lac-Mégantic, killing 47 people and destroying the town's center.

There have also been notable accidents in Lynchburg, Virginia and Casselton, North Dakota, as well as Alabama and South Carolina, and many other small incidents have occurred throughout the U.S.

As more and more people realize the problems surrounding these massive crude oil trains, it's only a matter of time before the next wave of the U.S. oil boom takes over...

Although train companies, BNSF especially, are raking in huge profits because of the spike in demand set off by oil production, the writing is on the wall.

As the status quo is disrupted by volumes of new oil and gas production, U.S. regulators could speed up the construction of pipelines (not named Keystone XL).

Throughout North Dakota, Texas, New Mexico, West Virginia, and Pennsylvania, there is a severe demand for efficient, cheap, and easily accessible pipeline capacity.

Even now, projects are underway. 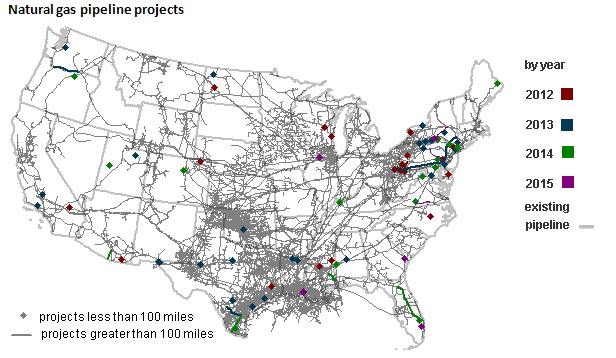 For example, the NET Mexico project just started functioning. It's a pipeline that runs from the Eagle Ford shale in Texas to Mexico, where natural gas is in high demand.

Mexico has struggled to develop its own natural gas reserves, so Eagle Ford operators are filling in the gap via the new pipeline.

In North Dakota, there are new sets of gas gathering and pipeline systems under construction as the state tries to reign in its wasteful flaring problems.

And that's on top of thousands of other pipeline projects pending approval or already underway throughout the United States.

One of the biggest mistakes you could make is to think that the only pipelines under construction are those that garner massive media attention, like the Keystone XL, Energy East, and Northern Gateway.

It's the small, under-the-radar projects and the companies working to get them done that will benefit the most.