In 2008, the Chrysler factory in Newark, Delaware went under, and today it is under demolition. 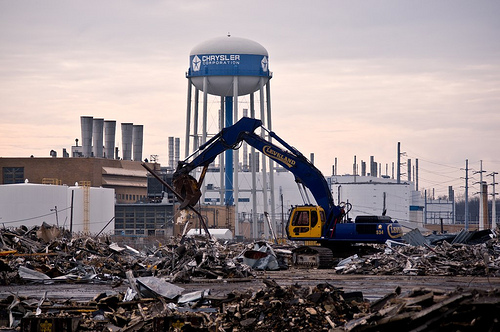 But there are new plans for this large plot of land, and they involve a cleantech company.

Rising from the ashes of this crumbling factory is Bloom Energy, a Sunnyvale, California company that makes Energy Servers called “Bloom boxes”.

Bloom Energy’s servers are made up of solid oxide fuel cells, cells that can be powered by any number of fuels, including but not limited to methane, natural gas, and even biomass.

The way these cells produce energy creates a very small percentage of emissions.

They can even recycle the excess heat to create even more energy.

They have recently made plans to expand to utilities in Tennessee, but the Delaware plan is by far the largest out-of-state plan, with an estimated size of 200,000 square feet for the new factory.

The deals and plans for this plant are still in progress and therefore not official, but according to a recent announcment Bloom’s goal is to have the plant functioning by 2012.

The plan would include a deal with Delmarva Power & Light, a major electricity company in Delaware that serves around 500,000 customers in the state.

Bloom would provide 300 Bloom boxes, enough to produce 30MW of energy, as each Bloom box alone produces 100kW of power.

A big perk of this plan following through would be the 1,500 jobs Bloom has promised to create in Delaware.

900 of these would come over the first five years for workers at the plant, and around 600 would be jobs for suppliers.

An additional 350 jobs are estimated for the construction of the plant itself.

Again, this all would depend on finalizing the agreement with the state government and with Delmarva, and it would also require grants that would fund the location cleanup as well as the jobs that will be a result of the project.

Bloom Energy is required to keep its end of the deal in regards to jobs and output in order to maintain the flow of government funding.

And we will see within the year if Bloom Energy succeeds in making these agreements.

With their cleantech efficiency, Bloom Boxes could be the energy of the future.

That’s all for now,