The U.S. economy has been run like a giant Ponzi scheme since the Asian Currency Contagion of 1998, when the Fed decided that the answer to a debt problem was more debt.

Soon to be followed by Saudi Arabia, Russia, South Africa, and Japan.

Each crisis was a reason for some central bank to add zeros to the end of its debt number on some spreadsheet. How long can it continue?

Canada and Australia are already in recession. How soon until the Vancouver real estate bubble pops?

In the United States, Williston, North Dakota is quickly turning into a modern-day ghost town. The boom-bust cycle is shutting down the man camps, the hookers have gone back home, and soon, you will be able to rent a modern townhouse for $200 a month.

Two weeks ago, the U.S. Energy Information Administration released its Drilling Productivity Report. It estimates that in August 2015, the Bakken shale produced 1.22 MMbpd of crude oil. That’s 1.40% less than the production levels in July 2015.

In August, the Bakken's month-over-month crude oil production fell for the second time in a row. 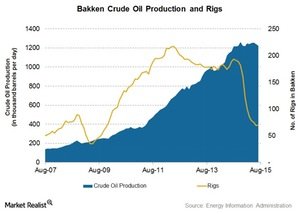 As you can see by the above chart, rig counts are way down, while production remains high. This can be explained by new technology in octopus rigs coupled with falling exploration.

As a side note, you should take rig counts with a grain of salt. The EIA calculates that the average Bakken rig added the production of 683 barrels per day in August 2015 — a 41% rise since August 2014. From August 2007, the additional production per rig rose 4.8 times.

With the slowdown in the global economies and the excess of oil on the market, oil companies are now trading at distressed levels.

Other commodity companies like Glencore and Noble Group have been hit hard and may go under. One Japanese shipper has filed for bankruptcy.

Despite the vast improvements in technology, the low price of oil means that many companies can't make money or get loans for new development. U.S. production is falling fast. Total U.S. production is down to 8.8 million barrels per day in the fourth quarter from an expected 9.1 million.

At the same time, drawdown increased to over 1 million barrels last week in Cushing, Oklahoma.

Cheaper oil means people use more of it. This is how commodity markets work.

Lower prices mean lower production and more use. At some point, the worm turns, and inventory runs out.

Companies that are now trading for pennies are bought up by competitors at a premium. Oil becomes scarcer, and prices go back up.

Survivors see their share prices increase by 1,000% to 3,000%. This is the point in the cycle where fortunes are made.

We aren’t at a confirmed bottom yet, but in 10 years or even five years, you would regret not buying now.

Blood in the Streets

On the world stage, Russia is producing slightly more oil, and the Saudis are going full bore in an effort to gain market share.

Both of these countries are now engaged in costly wars in Yemen and Syria. At some point, the money will run out.

The Saudis sold $4 billion in bonds over the summer. Its central bank has pulled $70 billion from the likes of asset management firm BlackRock over the past six months.

No one is talking about what this will do to equity prices. But Saudi cash isn't unlimited.

One Saudi prince has called for new leadership — an unheard-of thing in the Saudi Kingdom.

On the other hand, Putin's approval rating stands at an amazing 86%. But the peasant class is a fickle beast. A few downed planes and the bodies of Russia soldiers dragged through the streets could change this overnight. Only 39% of Russians approve of Putin's Syrian military adventures.

Nationalism will only get you so far, and the end result is always disastrous.

The global economy is now somewhere around $57 trillion in debt according to the World Debt Clock, and it's growing fast. The EU, Japan, and China all plan to add more stimulus.

There are only five countries in the world that don't have debt. These are all islands like Palau or special tax havens like Liechtenstein. They can't bail out anyone.

The problem with debt is that at some point, you have to pay the piper. Bills come due, and you can no longer prop up the empty corpse of the economy by adding another buttress. The flaming pile of debt will have his say.