A journalist at Forbes lived on bitcoin for a week in 2013 to see if it was possible… Her week’s experiment used 4.85 bitcoins… which would currently be valued at $20,000.

If he’d kept those bitcoins, he’d have more than $43 million dollars right now…

I watched it all weekend as it crept closer and closer…

It finally breached $4,000 on Sunday afternoon. 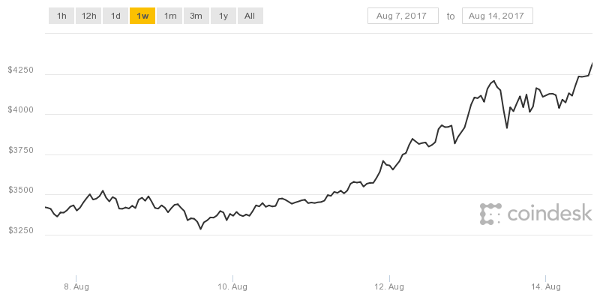 After the bitter hard fork/soft fork debate ended with the hard fork road being taken, along with the introduction of bitcoin cash (BCH), investors apparently decided that the faster transaction time was going to help the cryptocurrency spread to the masses, and prices rose over 17% from Friday’s.

Bitcoin’s market cap is now over $68 billion, with 16.5 million coins in the hands of investors.

The faster transaction times have certainly helped boost bitcoin, but there may be another factor at play…

People often use gold as a safe haven investment to hedge their bets when times are bad.

And with talk of nuclear war with North Korea, and the clash between neo-Nazis and white supremacists against protesters in Charlottesville over the weekend, there’s no doubt that the U.S. is on shaky political ground.

Many people are turning to bitcoin as a new safe haven investment, and the political tensions over the past week could very well have had a hand in the skyrocketing prices.

Now, I know that many of you are kicking yourselves for not getting having some bitcoins in your back pocket…

But the good news is, you can still invest in bitcoin without buying the coins themselves.

During the California gold rush, the men selling the picks and shovels made much more than the average gold prospector…

You can do the same with bitcoin.

Well, our very own Luke Burgess has created a whole presentation about it. You can read the written transcript here, or watch the video.

Bitcoin is changing the world as we know it.

Make sure you’re not left in the dust.

Also, don’t use your bitcoins for pizza.

Trust me, you’ll regret it.