The Case for Energy Storage

But Buffet isn't the main story here. In fact, he's more of a catalyst bringing an extremely lucrative investment opportunity to the public eye.

The real story here is energy storage, which I recently covered in a two-part series you can read here and here.

It's not a very sexy topic, I know. But easy double-baggers make it a bit more appealing.

The Case for Energy Storage

Do you remember when Obama was talking all that crazy stuff about doubling the use of renewable energy, laying new power lines, and improving energy efficiency?

Well, you should because he's been doing it for about a year now, half of which he's been the leader of the free world. And even if you haven't noticed (or don't care). . . others, including myself, profitably have.

This is because of the unique dynamic of the energy storage market.

You see, Congress is about to mandate that we get a certain percentage  probably 15-20%  of our electricity from renewable resources in the next decade. The bill has already passed committee in the House.

Thing is, not many people realize the full implications of this move. This is guaranteed market share and crystal clear visibility. Imagine if a new law required Sprint to have a guaranteed increased market share. You'd buy that stock, right? Thousands of investors would.

This is exactly what's happening in the renewable energy market right now. Solar and wind stocks, on average, have tacked on ~30% or more in the past few weeks.

But we're not talking about them today because energy storage stocks have proven even more lucrative.

And that's because energy storage is needed no matter the energy source. It's the only technology that will allow renewable energy to meet its new growth targets.

Going forward, nearly all new solar and wind projects could use an energy storage device to store excess power. This way, wind energy generated overnight could be used the next morning.

Industry insiders are forecasting inelastic demand for this market. If you know anything about economics, you know that means prices can be raised without affecting demand.

And it's been estimated that even if only 1% of projects that could use energy storage adopt some form of it, the market will be worth $600 billion in the next decade.

But profits are being made right now.

But I (and readers of Alternative Energy Speculator) didn't.

That's because when I see a looming opportunity, I take it. This market is being forced to grow, for crying out loud.

And the billions set aside for smart grid and battery development in the stimulus were a clear buy signal for this market.

Other investors obviously agreed. And look what happened: 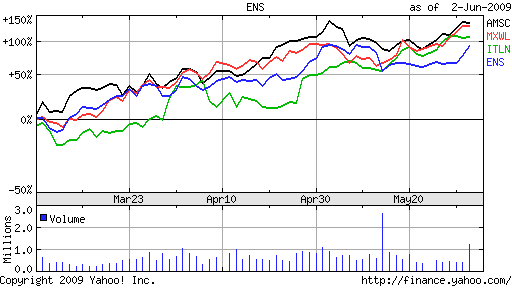 Readers of Alternative Energy Speculator have cashed out of three of those stocks for double-digit gains. And they're sitting on the other one for even more profits.

Were you in these stocks? Have you even heard of them?

These are the companies providing the backbone of a new energy economy. There are plenty more of them, and AES members have been reading about them for months.

If you're serious about investing in energy, you need to be reading about them as well.

China's got a $300 billion deal on the table to get 15% of its energy from renewables by 2020. India is shooting for 10% by 2012. And in addition to the coming U.S. targets I discussed above, the recent stimulus allocated $112 billion for the sector.

Have you heard anything about increasing the use of oil by law? Any mention of a fossil fuel stimulus?

Sure, there's money to be made there, but only because economic scarcity will drive up prices.

I'd want to get in on the ground floor of the new energy industry rather than jump off the top floor of a dying one.

P.S. I'm not pushing any ideology or political spectrum. I'm just calling it like is see it. And so far this year, I've called 27 winners in the cleantech space  23 of them were closed for double-digit gains. Stop thinking about it and start profiting from it.