The initiative is growing faster than anyone expected, and many places are no longer waiting for the free market to catch up.

Earlier this week, Reuters reported on an announcement made by authorities in Paris, France.

By 2030, the city intends to ban all gasoline and diesel cars, leaving electric vehicles as the only option to travel in and around one of the world’s most popular tourist cities.

Of course, it’s that popularity that caused the problem in the first place.

Paris officials have already started instituting temporary gasoline vehicle bans when the city’s smog levels get too high. With that ban made permanent, smog certainly won’t be an issue anymore.

There will, of course, have to be some major changes to make this transition as smooth as possible.

For instance, Paris will have to make all public transportation clean as well, so that those without access to an all-electric car can still get into and out of the city.

And make no mistake, that will still be the case. Though Bloomberg New Energy Finance expects EVs to account for more than half of new car sales by 2040, that still leaves quite a large market for traditional gasoline and diesel cars.

It’s also worth noting that the ban will only be on the city itself, not the entirety of France. The country intends to stop selling gas-powered cars by 2040, which leaves a full decade’s worth of leeway for those still sentimental about the internal combustion engine.

But France isn’t the only country taking these steps...

Who Is Banning Gasoline Cars?

Earlier this year, around the time France announced its plan to stop the production and sale of gasoline and diesel cars within the country, the very same plan was announced for the UK.

This means England, Scotland, Wales, and Northern Ireland will, in theory, be forcing drivers to buy electric vehicles or take clean, electric public transportation in just over 20 years.

That seems like a pretty long timeline, but to meet it, the changes have to start now.

And these are relatively small countries!

The world’s largest energy market hopped on board the EV bandwagon earlier this year, announcing its own intentions to ban the production and sale of non-electric vehicles.

More than any other country, China is notorious for its smog-filled cities.

Just last year, a study conducted by Nanjing University’s School of the Environment found that as many as one-third of Chinese deaths could be related to unhealthy levels of smog.

Of course, China also holds a unique advantage as the site of the biggest growth projections in lithium battery and EV production. No doubt they’ll have the resources to replace gasoline cars — so long as they can make them affordable to the average citizen.

This, as you may have guessed, is the biggest problem facing the EV revolution.

How Much Is an Electric Car?

Companies like Tesla and Chevy would have a lot less trouble selling their all-electric vehicles if they were more affordable.

However, this issue may resolve itself with time.

For one, the cost of a large-scale lithium battery pack — the largest portion of any EV’s price — is dropping day by day.

Tesla claims it is already producing batteries below $190 per kWh, and global consulting firm McKinsey & Co. expects the industry average to be below $100 per kWh by 2030.

That alone will make EVs more accessible to the masses.

There’s also the fact that as more affordable cars come onto the market, older cars will inevitably be retired... or simply sold used.

The easier they are to find for an affordable price, the more people will be willing to buy them over traditional gasoline cars. 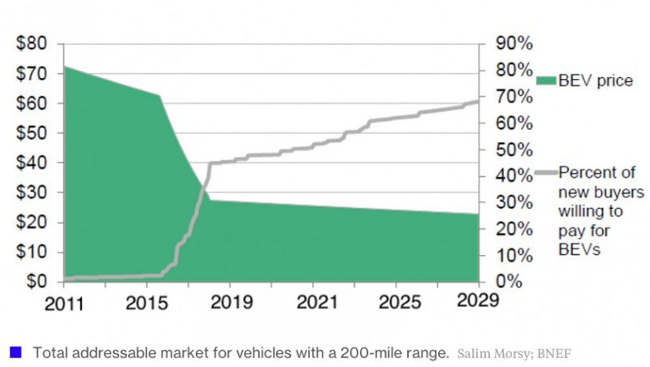 Tesla and its competitors have already proven the market is ready for all-electric cars; it’s a matter of when they’ll finally become the norm now, not if.