Is there A Bonanza Waiting At the North Pole?

Written by Brian Hicks
Posted June 5, 2009
One way to know that the end of the Age of Oil will soon be upon us is the current excitement and chatter about going—literally—to the ends of the earth to find more oil.

The Arctic Circle, which circumscribes about 6% of the earth's total surface, is one of the last regions of any significant size to be explored for oil, and for good reason: It's locked in ice for much of the year, far from support and distribution lines, and is one of the most extreme environments on earth. Whatever oil and gas is extracted from the top cap of our planet will be the most expensive and difficult oil ever produced.

Yet the prospect of new oil production from the Arctic is attracting renewed attention as the world becomes increasingly cognizant of the end of cheap, easy oil, and the security and economic risks associated with the expensive, difficult oil that remains. Exploration opportunities are diminishing every year, as the world continues its 40+-year-long slide down the backside of the exploration bell curve.

With global warming causing the polar ice pack to break up and retreat, it has become possible to sail ships through the Northwest Passage for the first time in recorded human history. (When it was last open is not known, but it could have as recently as the Medieval Warm Period from 1000-1300 AD, when Norse and Icelandic explorers settled Greenland, or distant as the last inter-glacial period, 120,000 years ago.) Thus it now seems at least physically possible to tap the fossil fuel resources of the Arctic.

More specifically, the focus now is upon offshore resources in the Arctic Circle, in continental shelves under less than 500 meters of water. Onshore areas in the region have already been explored, with some 40 billion barrels of oil (BBO), 1136 trillion cubic feet (TCF) of natural gas, and 8 billion barrels of natural gas liquids having been developed, primarily in the West Siberian Basin of Russia and on the North Slope of Alaska. Deepwater basins in the Arctic Circle are considered weak prospects as they lack the appropriate source rock structures.

The important question now is: How much remains to be discovered up there?

In an effort to answer this question, the United States Geological Survey (USGS) in cooperation with an international group of geological experts from Canada, Demark, Greenland, Norway, Russia, and other governmental agencies has just completed an effort to round up the available data on the Arctic region and assess its potential, known as the Circum-Arctic Resource Appraisal (CARA). Their summary report, "Assessment of Undiscovered Oil and Gas in the Arctic," was released last week.

Much of the area is as yet unexplored, so an innovative approach to assessing the area and extrapolating from the limited data available was required. In order to have some way of evaluating the "very sparse geological data" on the area, the evaluators used "analogs" from the real world as comparison samples.

The team divided the area into 69 Assessment Units (AUs) that contained at least 3 km of sedimentary rock, since such source rocks are where the vast majority of oil is found. It limited its assessment to resources thought to contain at least 50 million barrels of oil, or 300 billion cubic feet of gas (50 million barrels of oil equivalent, or MMBOE). According to the report, fields larger than 50 MMBO make up more than 95% of the world's known oil and gas resources by volume, so the limit gives us a good approximation without pretending to more detailed understanding than is warranted by the data. It also considered only conventional oil resources, excluding unconventional resources such as coal bed methane, gas hydrates, oil shales, heavy oil and so on.

Most importantly, it presented its results "without reference to costs of exploration and development." 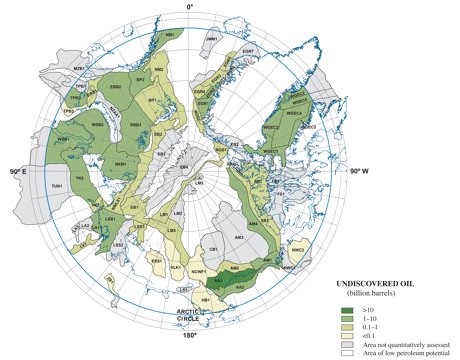 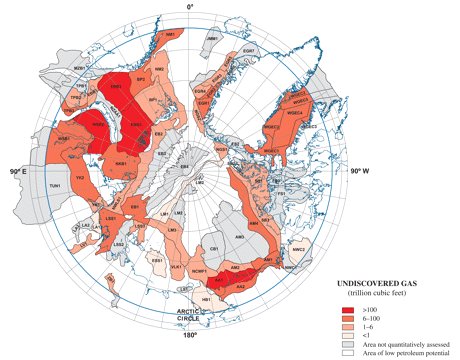 A range of probabilistic estimates were developed for the assessment units, which were then aggregated into the summary report. Estimates of undiscovered resources are customarily stated in terms of a range of probabilities. The median, P50 estimates (50% probability) are usually reported in the press, but they're often shown to be optimistic once a given resource is produced.

Interestingly, an analysis by respected petroleum geologist Jean Laherrère in March 2008 on The Oil Drum estimated that the Arctic would contain 50 billion barrels of oil and 1000 TCF of gas, putting his estimates just above the P95 estimates offered by the USGS. Laherrère is one of the fathers of the modern peak oil study, a man with deep experience in the global oil and gas exploration and production industry, and his estimates are usually quite accurate.

However, these are merely estimates of "original oil and gas in place." Typically, only 25-35% of that amount is economically recoverable using current technology. So the Arctic may in fact have perhaps a 4-month world supply of recoverable oil, and around a 2-year supply of gas.

In reality of course, the resources wouldn't be found or produced all at once, but rather in chunks, over time, and would have far greater implications for the nations that lay claim to it (for example, Greenland) than for the world as a whole. "With respect to oil, there's nothing that we see in the Arctic that suggests this preeminence of oil within and around the Gulf states would be significantly shifted," said geologist Donald Gautier, lead author of the survey.

Given the scarcity of actual drilling data and the reliance on analogs and statistical simulation for this survey, our understanding of the Arctic's hydrocarbon potential will no doubt evolve as fresh prospecting gets under way. In terms of the all-important production rate however, it seems safe to assume that although the Arctic's resources will be most welcome to the nations that possess them, they will amount to little more than a trickle of very expensive hydrocarbons within the context of enormous world demand.

Exploration and development of oil and gas from the Arctic Circle is a foregone conclusion. The world simply needs hydrocarbons too much, and the remaining prospects are few. But to exploit it will require technologies that don't yet exist, enormous amounts of capital, and a high tolerance for risk. In other words, the price of oil will have to be high, and stay high, to make the effort worthwhile.

Next week we'll take a look at some of the companies that are working to explore and develop the Arctic, and the cutting-edge technologies they are developing.

Investor's Note: While the race for Arctic oil continues, investors need to realize that actual production from this area is years or maybe even decades away. But that doesn't mean you need to wait that long to profit from deepwater drilling. If you're interested in taking some of those offshore profits to the bank, perhaps it's time you joined our success.