Another Record Broken by the Oil Industry

Exxon Drills 13 Miles to Reach Billions of Barrels of Oil

With all the talk about the fracking boom under way in the Bakken, Marcellus, and Eagle Ford, we forget there are other earth-shattering drilling projects and technologies going on around the world.

Now, two weeks ago I told you about a new technology that's emerging in America's oil and gas-rich shale formations...

Historically only one well was drilled on a pad site, but with the revolution in horizontal drilling, companies can spread out their drill bits from a single pad site — almost like tentacles of an octopus.

It's estimated that multi-well pad drilling can double the recovery rate of oil in North America.

As American companies perfect horizontal drilling and hydraulic fracturing with multi-well pad drilling, another technology is quickly emerging on the scene.

And it's being utilized by "old oil" companies...

From the Russian island Sakhalin (just north of Japan), Exxon drilled onshore wells to a depth of 12,376 meters.

That's over 7.5 miles down into the earth.

It then turned the drill bit and drilled horizontally for 11,745 meters to reach the offshore Odoptu oil field... 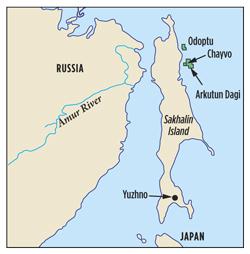 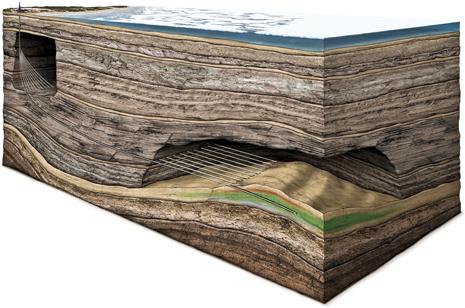 According to media reports:

Exxon, the world's largest oil company, has completed drilling the world's deepest well in the Chayvo oil field on the Sakhalin Shelf in the Russian Far East.

The shaft of well Z-44 is 12,376 meters deep — the equivalent of 15 times the height of the world's tallest skyscraper, the Burj Khalifa in Dubai.

"We are proud of this achievement, which furthers the successful implementation of this remarkable project," ENL chief James Taylor is quoted as saying.

Six of the world's ten deepest wells, including Z-44, have been drilled in Russia for the Sakhalin-1 project using ExxonMobil drilling technology — the so-called "fast drill," Taylor added.

Chayvo is one of the three Sakhalin-1 fields and is located off the northeast coast of Sakhalin Island in eastern Russia. The Sakhalin-1 project is being developed by an international consortium led by ENL, which holds a 30% stake, the Japanese SODECO (30%), India's ONGC Videsh Ltd (20%), and subsidiaries of Russian oil major Rosneft, RN Astra (8.5%) and Sakhalinmorneftegaz Shelf (11.5%).

The total project is estimated to cost $10-$12 billion. The fields of Chayvo, Odoptu, and Arkutun-Dagi are estimated to yield 2.3 billion barrels of oil and 17.1 trillion cubic feet of natural gas.

The total resource value of these three fields is estimated to be above $200 billion.

But this is just the beginning...

Extended-reach drilling allows companies to go after reserves that were previously too costly and out of the reach of traditional drilling methods (sound familiar?).

In other words, oil reserves that have been known about for decades — but weren't produced because of economic and technology constraints — are now open for business.

The oil and gas singularity is here.