Written by Christian DeHaemer
Posted May 1, 2014

Driving that train, high on cocaine,
Casey Jones you better watch your speed.
Trouble ahead, trouble behind,
And you know that notion just crossed my mind.

As I am writing this on Wednesday afternoon, there is very little information. No injuries have been reported. Photos and video show tanker cars on fire, pouring out thick clouds of black smoke. 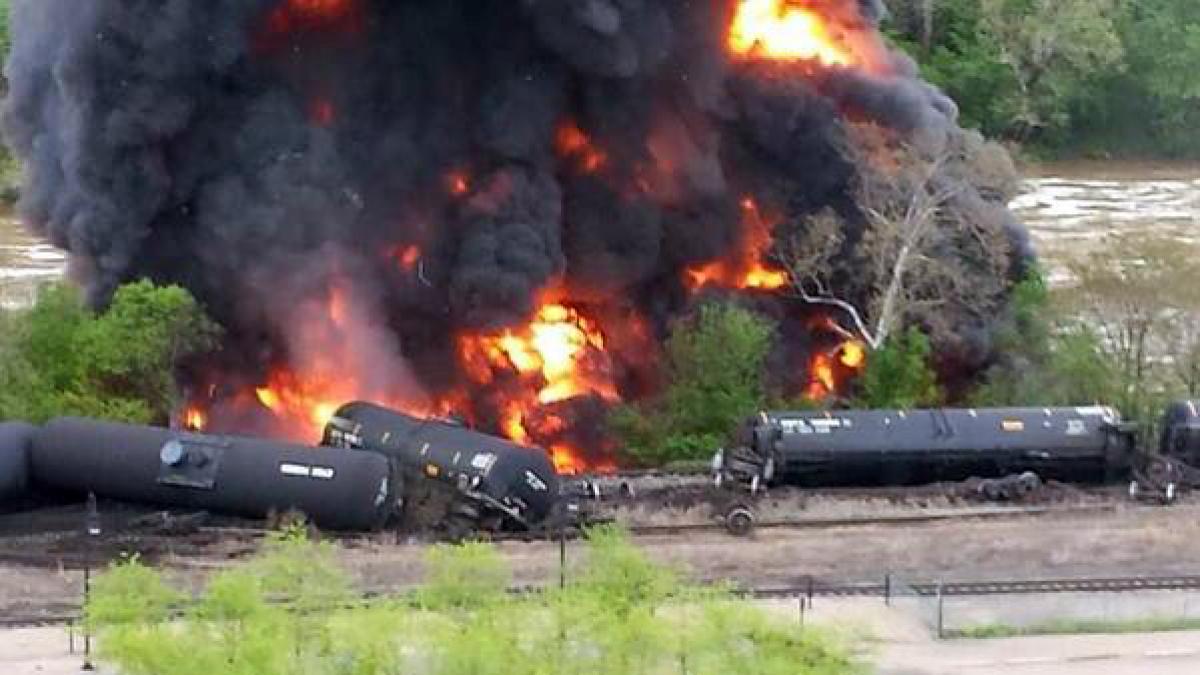 I hope everyone is safe.

You Have Two Good Eyes, But You Still Don't See

The United States is undergoing an oil and natural gas boom. There are so many trains moving oil about the country that it is now unsafe. Traffic is up 400% in the last decade, and some trains are over 100 cars long.

Last July, a runaway oil train derailed and exploded in the Quebec town of Lac-Mégantic, engulfing the town in a flaming black ball of death, killing 47 people, and destroying half of the town center.

Then, over the winter, a 104-car oil train struck another train in Casselton, North Dakota, sending fireballs high into the sky as cars piled on each other and exploded. No one died, but 2,000 people fled in fear of toxic smoke.

Another fiery derailment occurred in Alabama in November. Just two days ago, a train took out a bridge in South Carolina. And yesterday it was Lynchburg.

Two months ago, I told you about new rules for tanker cars and how one company, the Greenbrier Companies Inc. (NYSE: GBX), was designing the "tank car of the future." It was a new safety car that would transport crude oil, ethanol, or other flammable freight.

Since I told my readers in Crisis and Opportunity to buy GBX, the stock is up 47%.

I hope you bought it when I told you and that you've made some money as well. It's up 41% since then.

But there are more ways to make money from stocks than by just buying stocks that solve a particular problem. You see, due to my prior knowledge of the Greenbrier Companies, I knew as soon as I heard about the train crash that GBX stock would go up.

And because I'm sitting here at my computer watching for it, I heard about the train crash almost as soon as it happened.

The first thing I did was study the GBX option chain, write up an action alert, and ship it out to readers of Options Trading Pit.

As I write this 53 minutes later, those same options are up 77%. I will likely recommend selling them before you read this.

If the 41% gains you've made on GBX aren't enough to get you going and you are an experienced investor, I recommend you read my essay on trading options. It's not for everyone... but as long as you are here, you might as well make money.

By the way, hold onto GBX. It has more upside because fracking ain't over by a long shot.