Last week, I shared something very important with you.

It was a quote from analysts at Cowen & Co., which illustrated the very real threat that legal cannabis is having on the $1.2 trillion global alcohol market.

Here it is again:

While recreational cannabis has only limited availability, the rise of cannabis consumption more broadly looks to be weighing on alcoholic beverage consumption, where it is now in decline for men and higher income consumers.

The day after you read this, Molson Coors Brewing Company disclosed in its 2017 10-K filing that legal cannabis is now officially a “risk factor” for its beer business.

Although the ultimate impact is currently unknown, the emergence of legal cannabis in certain U.S. states and Canada may result in a shift of discretionary income away from our products or a change in consumer preferences away from beer.

As a result, a shift in consumer preferences away from our products or beer or a decline in the consumption of our products could result in a material adverse effect on our business and financial results.

This is Molson Coors, folks — not some microbrewery.

The company just posted net sales of $2.58 billion for its most recent quarter.

And these guys now see legal cannabis as a risk factor. And they’re not the only ones...

Brown-Forman Corporation, the makers of Jack Daniel's, has indicated cannabis legalization as a risk factor, noting in its 2014 10-K report:

Consumer preferences and purchases may shift due to a host of factors, many of which are difficult to predict, including... the potential legalization of marijuana use on a more widespread basis within the United States...

Then there’s The Boston Beer Company, the maker of Samuel Adams, which stated in its 2015 annual filing that “legal marijuana usage could adversely impact the demand for the Company’s products.”

Of course, it should be noted that Boston Beer Company also made a land deal last year with a Colorado-based cannabis company AmeriCann, through which Boston Beer sold AmeriCann a 52-acre parcel of land in Massachusetts.

Boston Beer Company is a $2 billion company. Management isn’t stupid, and it likely sees the writing on the wall. Certainly, we do...

Last week, it was announced that Aurora Cannabis (TSX: ACB) completed a $103.5 million investment in Liquor Stores N.A., which operates 231 retail liquor stores. This investment gives Aurora about 20% of the company.

Liquor Stores will use this cash to establish a new brand of cannabis retail outlets.

While this is a smart move for Liquor Stores, it’s a genius move on the part of Aurora. And that's because Liquor Stores already has the infrastructure, logistics, and capacity to build and operate a large network of retail outlets, which Aurora now has a stake in.

Now, if you’ve been following the cannabis space for as long as I have, you already know that Aurora is a major player.

Members of my Green Chip Stocks investment community actually bought shares of this one less than four months ago at around $3 a share.

Here’s how that’s worked out so far: 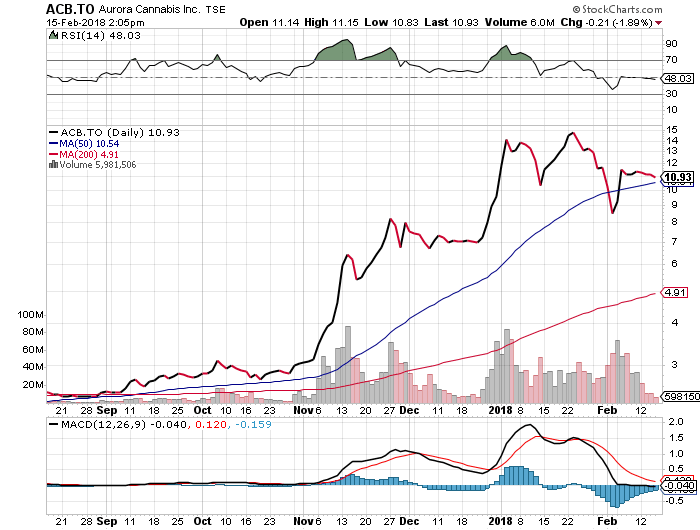 And by the way, that’s just one of many big scores we’ve landed from the legal cannabis space.

Take a look at where our portfolio sits right now: 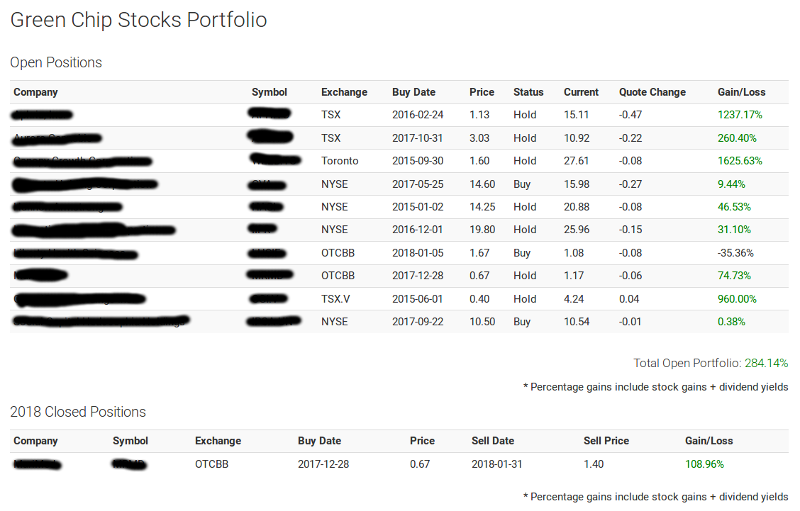 And this, dear reader, is just the tip of the iceberg.

For legal cannabis stocks, 2018 will be its biggest year yet. And unless you hate money, you need to get some exposure to this space right now.

To help you get started, I put together this “Introduction to Cannabis Investing” video, which you can watch here.

You can also click here to get access to my best-selling e-book “A Beginner’s Guide to Investing in Cannabis.”

I strongly recommend that you don’t sit on the sidelines for this one, though.

Definitely make a move soon because, rest assured, the $1.2 trillion global alcohol industry is. And they don’t play to lose.

Get yourself a piece of this today.

Investing in Innovative Industrial Properties (NYSE: IIPR)
Energy and Capital editor Jeff Siegel talks about cannabis market gains and why Innovative Industrial Properties (NYSE: IIPR) is a buy.
There’s No End in Sight for Cannabis Investors
Cannabis sales are officially moving in on beer sales. Energy and Capital editor Jeff Siegel discusses why that's good for investors and how the profits have already started rolling in.
New Cannabis ETF is Coming
Organigram expands, Horizons Marijuana Life Sciences launches a new ETF, and prohibitionists try to stop Michigan from legalizing.
Hydrogen Fuel Cells: The Downfall of Tesla?
Lithium has been the front-runner in the battery technology market for years, but that is all coming to an end. Elon Musk is against them, but Jeff Bezos is investing heavily in them. Hydrogen Fuel Cells will turn the battery market upside down and we've discovered the tiny company that is going to make it happen.