A Helicopter Ride to Virgin Wealth

The roughneck I sat next to on the flight in hadn't even been around a quarter century.

Judging by the head bobbing and loud music coming from his headphones, he probably thinks 1973 Oil Embargo is a cool new band...

But this young man is pulling down $2,500 per week monitoring underground sensors in one of the oil sands operations just north of Fort McMurray, Alberta. 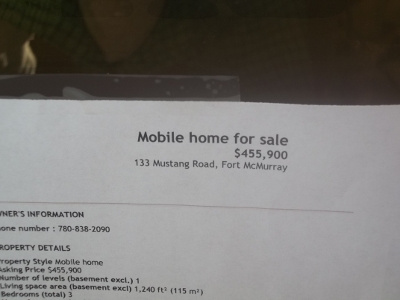 The guys who have been there a few years and can drive the large machinery — dump trucks that haul 400 tonnes per trip — have no problem earning well over $4,000 per week.

Coffee shop counter attendants are pulling down $20 an hour.

Everyone has a new truck. Doublewides are selling for a cool half million.

Yet the airport has only two gates: Arrival and Departure. No skywalks — you walk across the runway to get to your plane.

A massive extension to the airport is underway and new hotels are constantly under construction...

Something big is going on here.

The frenzy is all because of Alberta's bituminous sands.

It's like an ocean of frozen molasses right near the surface. The Alberta Government says 170 billion barrels are recoverable, 315 billion are potentially recoverable.

It's the only such formation in the world that is suitable for surface mining. Right now, it produces about 1.5 million barrels per day — 2% of global production — with three main operators getting the lion's share: Suncor (NYSE: SU), Syncrude, and Shell (NYSE: RDS).

If current expansion plans are executed, oil sands production will top 3 mbd by 2020.

What's important here is the formation: how close the oil is to the surface.

Over 120,000 acres of Northern Alberta is currently undergoing surface mining. To do that, the oil has to be less than 75 meters underground.

It's precisely this reason that I took five different flights to get to and from this remote part of the world last week. I was there to see a large property (600,000 acres or so) just north of the massive oil operations.

We choppered in on a private bird with a going rate of $2,000 per hour.

Flying north from Ft. McMurray, we experienced a bird's-eye view of all the oil sands projects on our way to the property. (The most striking memory from that is the Great Pyramids of sulfur, which is extracted from the heavy oil.)

To better visualize our destination, have a look at the map below.

We started in Ft. McMurray and flew over the tar sands operations (detailed in green) to our final destination: over 1,000 square miles of birch- and spruce-covered foothills.

Located within the property are six giant bulk mining targets each containing vast amounts of various metals on or just below the surface.

"Vast" doesn't really do it justice; here are some early test results from one of the six locations: 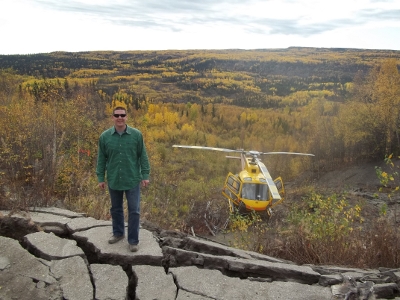 There are literally billions of tons of highly sought-after metals sitting right on the surface of this untouched land.

It's virgin wealth. It's a ground floor opportunity of the purest kind.

The entire property isn't even entirely accessible yet. The day before we arrived, the CEO took a separate chopper to hand clear better landing spots for our visit.

The small clearing we used for our first stop (pictured) didn't exist two weeks ago...

Other areas weren't cleared at all. The final outcropping I got to see required a half-mile hike up a heavily wooded (and muddy) incline. The hike was manageable, but standing 20 feet above a rocky stream on a shale precipice with shaky footing was a bit scarier.

Of course, it will all be worth it.

If you look closely, you can see rust seeping out of the shale. That's how close this abundance of metals is to the surface. 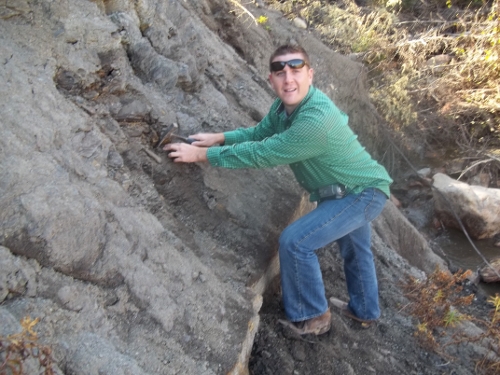 The shale averages 75 feet deep over thousands of acres. Once under production, it could supply the entire world with raw materials for the next century and beyond.

I can say I held it in my hand when it was untouched wilderness.

And you get to be in from the beginning on the metal equivalent of the tar sands.