Before European settlers arrived, Maori (native New Zealanders) knew oil existed in New Zealand. And like Native Americans, the Maori used the oil for everything from medicine to glue.

It was oil seepages that Maori and early settlers noticed first. When they arrived at the beach at New Plymouth, early settlers found deposits of thick oil washed ashore... There was so much oil washing up on the beach, in fact, that settlers had to wipe their boots and lift their dresses as they walked along the shore.

Digging a shaft to locate this oil began in 1865. When they reached a depth of about 20 feet, the workers could no longer work in the bottom of the shaft because of the natural gas and the risk of explosions.

But that didn't stop the search for oil...

However, it was the discoveries of Kapuni in 1959 and Maui in 1969 — and the arrival of companies like Shell — that rocketed the Kiwi nation into the modern petroleum era.

When Maui was discovered, it was one of the six largest gas fields in the Western world.

In 1969 the Shell-BP-Todd consortium drilled the first New Zealand offshore well, and the Maui field was discovered some 20 miles off the coast of Taranaki. Production began in 1979.

On June 6-7 of this year, the world oil and gas industry will converge on New Plymouth for ENEX, New Zealand's annual energy conference. This year's event promises to be a blockbuster, thanks to the discovery of a vast shale field on the North Island known as the East Coast Basin.

This discovery is so profound, many in the industry are calling it "the New Zealand Bakken."

It's no secret how game-changing the Bakken discovery has been to the state of North Dakota, and to the United States in general.

Its impact has been hard to miss. 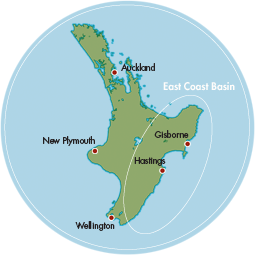 The Bakken is the largest producing oil reserve in the country. Oil production in North Dakota has grown some 600% since 2005, and North Dakota now sports the lowest unemployment rate in the United States — all because of this oil formation.

When production ramped up there just a few short years ago, millionaires were literally minted by the hour.

And that's what has oil companies rushing into New Zealand.

You see, an independent report released in October 2012 says the East Coast Basin shale field could hold between 12 to 20 billion barrels of oil.

A report is saying the East Coast Basin shale field could be 2x to 3x larger than the Bakken.

Geologists have discovered at least 300 spots where oil and gas are bubbling at the surface.

The New Zealand Herald reports the field is "literally leaking oil and gas."

The massive potential of this field will make untold fortunes for those with the foresight to get in early.

And next week we’re going to show you exactly how — with two companies already there, each trading for less than $6 a share.