5 Technical Analysis Tools Every Investor Must Have

After a massive run for a year, the market is down today, led by Tesla, which dropped about 200 points before bouncing back. As I write this, the Nasdaq is down 1.73%.

There is no question that the market is overvalued in terms of historic measurements like market cap-to-GDP, margin levels, and number of stocks without earnings.

The question is does the end of the pandemic, the reopening of the markets, and low interest rates justify this lofty valuation? One can only speculate, but rising interest rates — like we’ve seen over the past few months — have killed off more than one bull market.

That said, you should have some basic tools that help you avoid the next market crash. So today, I give you five simple and easy-to-understand technical signals to gauge any market.

The double top is one of the simplest technical patterns to pick up. It happens when a stock’s price bounces off the same resistance line twice. 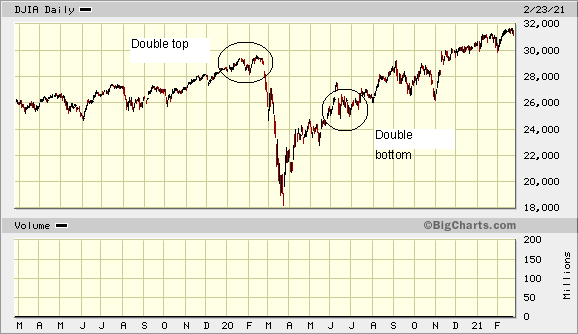 You can see both double tops and double bottoms in the Dow Jones Industrial Average chart above. And it was right both times.

The double top is a sell signal. A double bottom is a buy; it means there’s a strong support level that the stock’s price will have trouble falling below.

Many people don't know the MACD, but it is one of my favorite tools — and you should never buy a stock without looking at it.

MACD stands for “moving average convergence/divergence” and was created by Gerald Appel in the late 1970s. I find it a handy and simple guide for timing my buys and sells.

The MACD is an oscillator, or a collection of three signals calculated from historical price data: two moving averages — a long-term one and a short-term one — moving over a centerline. 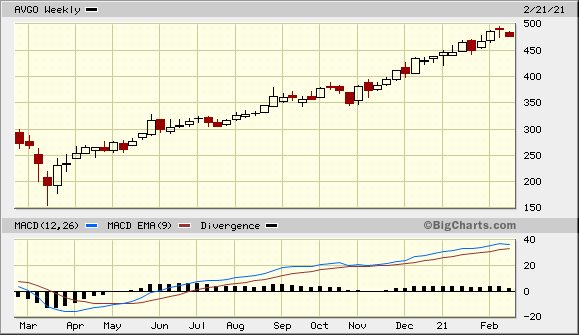 You see where the blue line crosses the red line last May?

This signals a turnaround in the share price. At the right side of the graph are numbers from -20–40. The farther the blue and red lines cross away from the centerline (zero), the more powerful the turnaround.

Dojis are fantastic when they appear after a long trend. If you get seven up days in a row with a doji at the top — sell, because she's gone.

Dojis are a candlestick chart pattern that was developed more than 1,000 years ago by traders on the Japanese rice markets. Dojis are powerful reversal signals, like stock ninjas.

A candlestick is a visual representation of a trading session. You have an open, a close, a high price, and a low price.

If the candlestick is white, the price closed higher than it was when the market opened.

If it is red, the price ended the day lower than it started.

The vertical legs are the highs and lows. Doji candlesticks are black because they closed at or near where they opened.

In other words, dojis are formed when the candlestick opens and closes at the same level, implying the fight between the bulls and the bears is at loggerheads. Dojis signal turning points.

Bollinger Bands allow users to compare volatility and relative price levels over a period of time. They consist of three bands:

Standard deviation, a statistical term that provides a good indication of volatility, ensures that the bands will react to price movements and reflect periods of high and low volatility. Sharp price increases (or decreases) will lead to a widening of the bands.

For our purposes, let's make this a bit simpler...

But the crux is when it narrows. A narrow Bollinger Band means a turning point.

Here is the Tesla (NASDAQ: TSLA) chart. Notice how when the share price bounces along the lower bands and the two bands narrow, the share price lurches higher. The exact opposite happened over the last two months, and TSLA has broken down. 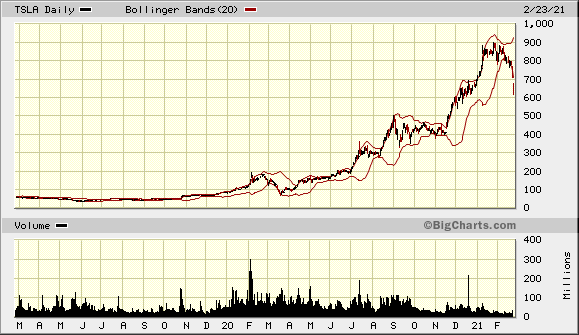 Note the volume surging last year and then fading in the TSLA chart above.

A volume spike can signal a reversal of trend, such as a capitulation low or a blowoff top. If a volume spike comes before a known event, like an earnings announcement or a Phase 3 trial announcement, it means there has been a leak and insiders are loading up.

In other words, volume precedes price.