This past Saturday afternoon, Rick Diaz locked in another customer.

A former roofing contractor, Rick is now a sales rep and installation manager for a small roofing and solar company in Maryland. He tells me most people he talks to about solar have pretty much already made up their minds before he even walks in the door:

The investment works out for young couples who are going to be in these homes for more than ten years. But most seem more concerned about the environment than the return on investment. Either way, it's a win-win. Selling solar is probably the easiest thing I've ever done.

Diaz is part of a burgeoning workforce that has grown tremendously over the past few years. In fact, solar industry jobs are growing at 20 times the national rate. 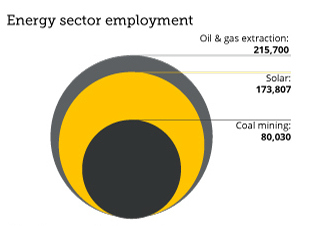 As an interesting side note, there are now twice as many solar jobs as coal jobs.

Of course, this shouldn't come as a surprise. After all, coal loses more and more market share every day due to regulatory hurdles and dirt-cheap natural gas.

SolarCity (NASDAQ: SCTY) CEO Lyndon Rive has actually gone on record saying that the industry is expecting a slowdown in 2017 after the solar ITC is set to expire.

It's hard to say whether or not the ITC will be extended. Plenty of politicians in Washington have been talking a good game about cutting these types of subsidies for renewable energy.

However, there are also plenty of politicians that now rely on the solar industry to provide jobs in their respective states.

Regardless, just the threat of losing the ITC has been enough to light a fire under the industry. And this is why we're going to see a huge rush on solar development in 2015.

The window of tax credit opportunity could soon close for good — and every solar developer in the U.S. is gearing up for a very busy year.

Scraps at the Table

A few years back, we saw something similar with the wind energy industry.

With the threat of an end to its federal tax incentives, the industry grew at a tremendously rapid pace. Companies like GE (NYSE: GE), Siemens, and Vestas Wind Systems (OTCBB: VWDRY) were booming with orders, and developers raced to get their projects started before the tax credits expired.

It was definitely a great time to be a wind energy investor.

Of course, after the industry lost its federal support, wind turbine orders plummeted, and new developments began to slow.

Today, the wind energy industry is still left begging for scraps at the subsidy table, and that continues to hinder growth. However, the industry did stabilize a bit last year, and we are starting to see more interest in wind developments again, mostly due to new financing models and the rise of the yieldco.

In any event, there's little doubt that the solar ITC has helped the solar industry grow so rapidly. And just the possibility of the ITC expiring should be enough to get every energy investor off the sidelines and into the game.

Over the next two years, the industry's going to be on fire — and solar investors should do quite well.

Now, some folks still believe that the collapsing of oil prices will hurt the solar industry. As I've written in the past, the only connection between oil prices and solar is psychological.

Oil is used primarily as a transportation fuel, while solar is used for electricity generation. In fact, with lower oil prices, solar manufacturers and installers actually benefit from cheaper input costs.

Although some continue to diffuse this oil-solar connection myth, solar companies are capitalizing on these low oil prices and expanding rapidly.